The Dogs of San Gerónimo Tlamaco

We take a break from our series on murals to look at the portrayal of animals in carved reliefs from a variety of early Mexican churches.
Among the pleasures of traveling through the state of Hidalgo, north of the Valley of Mexico, is exploring the lesser known colonial churches and monuments of the region.
One of these gems is the little church of San Gerónimo Tlamaco with its arcaded open chapel, built in the 1570s using the local, fine grained cantera stone whose apricot hues lend a warm glow to the facade. 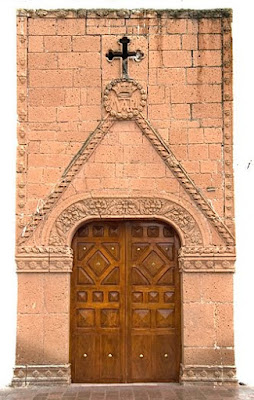 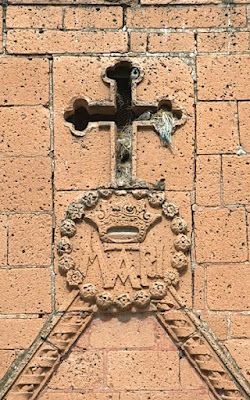 The main interest of the facade is its sculpted porch. In a quite original configuration, the broad door jambs are topped and tailed by rows of rosettes that continue upwards into the tall, square alfiz that frames the entire porch.
A spiraling, thorn-and-ribbon molding extends above the doorway into an inner, sharply triangular alfiz that terminates in a rosary enclosing the crowned Marian monogram.
A fleur-de-lis cross pierces the facade overhead. 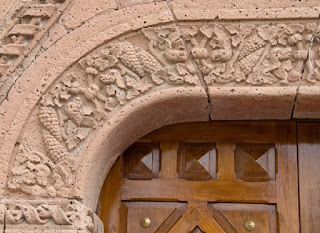 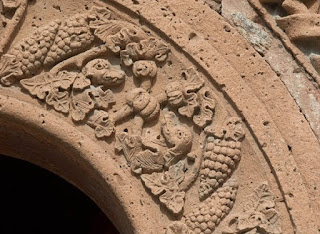 Dogs' heads peer out from the finely modeled, stylized grapevine that curves around the basket handle arch above the doorway—an example of tequitqui stone carving at its best. 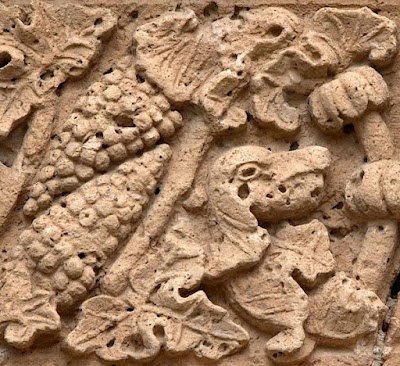