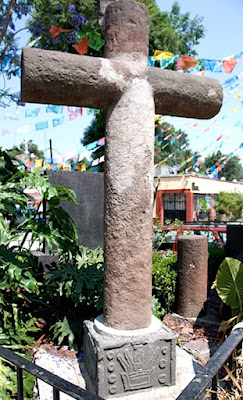 the cross at Santa Maria Nativitas-Zacapa 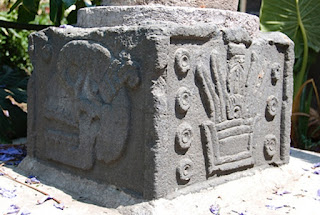 Ahuitzotl's Box ?
In 1499, the Aztec emperor Ahuitzotl* completed an important aqueduct from Coyoacán in the southern part of present day Mexico City to his island capital of Tenochtitlan.
To commemorate this achievement, a number of carved, box like monuments, inscribed with this date Seven Reed (ácatl) in the Aztec calendar, were reputedly placed as markers along the causeway beside the route of the ancient aqueduct.
While most of these have been lost or mutilated, one putative complete example was recycled as the base of an atrium cross in the picturesque waterside community of Nativitas-Zacapa near Xochimilco, to the south of Mexico City.
In addition to the 7 Reed glyph, the day sign 1 miquiztli, a skull signifying Death, was carved on two other faces.  On the fourth side is carved a relief of  4-ollín, the Aztec Fifth Sun glyph. 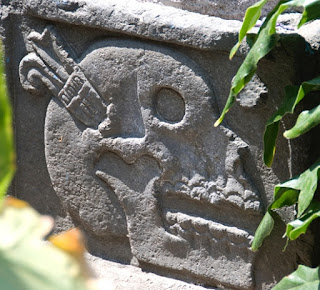 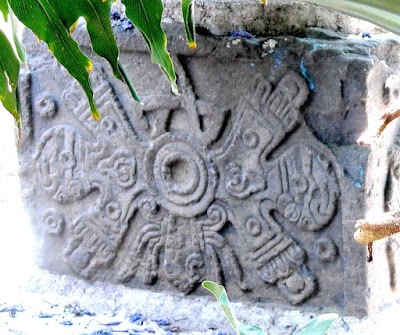 * Ahuitzotl was the eighth ruler, or tlatoani, of the Aztecs. He took power in the year 7 Rabbit (1486) following the death of Tízoc, the 7th tlatoani. After the reign of his weak predecessor, the youthful Ahuitzotl oversaw an aggressive expansion of the Aztec/Mexica empire and consolidated its power.
One of the best known Pre-Columbian military leaders, Ahuitzotl conquered the Mixtecs, Zapotecs and other groups along Mexico's Pacific coast as far as Guatemala.
At home, Ahuitzotl supervised a major rebuilding of Tenochtitlan, his island capital, on a grand scale, notably with the expansion and completion of the Great Pyramid or Templo Mayor.
The aqueduct project was less of a success; its completion precipitated disastrous flooding, from which Ahuitzotl himself barely escaped, reputedly suffering a head injury that may have led to his death soon after. 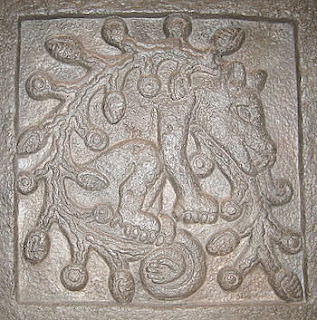 He took his name from the mythical animal Ahuizotl, a combative, beaver-like creature with sharp teeth and claws also known as the Water Monster.
Ahuitzotl died in the year 10 Rabbit (1502) and was succeeded by his nephew, the ill-fated Moctezuma II. An Aztec royal tomb believed to be that of Ahuitzotl was recently uncovered in the precincts of the former Templo Mayor in Mexico City.
©2016 Richard D. Perry.   cross images by Niccolò Brooker & Diana Roberts