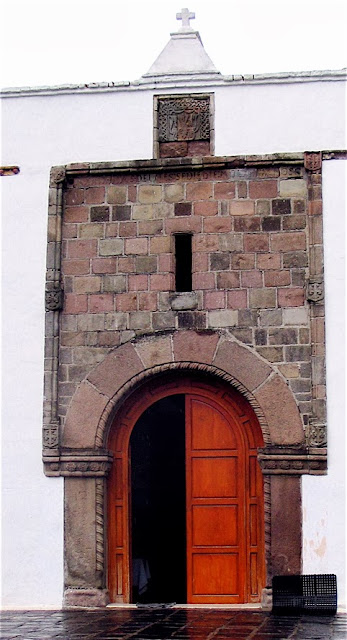 Santa Cruz Atoyac
Beside the River
This 16th century chapel, formerly a visita of neighboring Coyoacán, features an elegantly carved porch of mauve volcanic tezontle whose broad arched doorway is outlined by a knotted cord and relief rosettes. 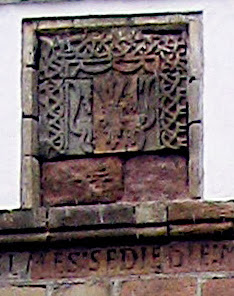 The doorway is surmounted by a high alfiz studded with medallions of Maltese or Jerusalem crosses (the church is dedicated to Santa Cruz de Jerusalén)—a style of cross associated with the Franciscan order.
Framed by a stylized, crown of thorns border, the Franciscan emblem of the Stigmata with three nails is emblazoned overhead. 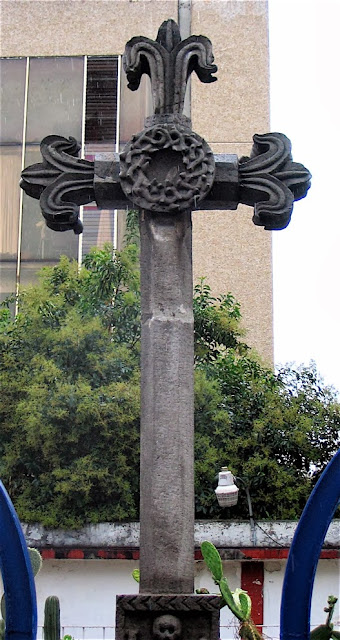 The Atrium Cross
Known locally as the Jerusalem Cross, this tall, octagonal cross stands atop an artificial concrete mound set in front of the church. Similar in style to Chimalistac, it has minimal arms and neck, but like the Mixcoac cross, prominent, sharply contoured fleur-de-lis finials sprout from the arms and head of the cross.
As with other local crosses, no Instruments or other Passion symbols appear on the cross itself, aside from a huge, complex Crown of Thorns that projects in high relief at the crossing—an innovation seen in other area examples. 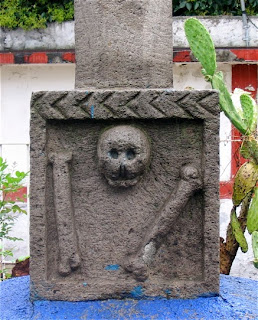 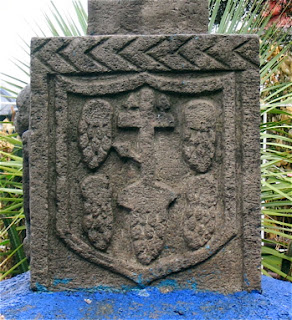 Like others in the area, too, the foot of the cross stands on a carved base: in this case, a box pedestal emblazoned with the Franciscan emblem of the Five Wounds on three sides and a crude Skull and Bones on the main face—the bones placed vertically on either side of the skull as at Axotla. 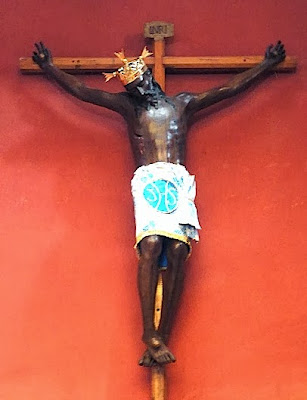 And like Chimalistac, a revered colonial pasta de caña crucifix—controversially newly restored—occupies a place of honor inside the church.


text © 2013 Richard D. Perry.  pictures by the author and Niccolo Brooker
Look for our forthcoming guide to Mexican Stone Crosses
Posted by Richard Perry at 4:18 PM