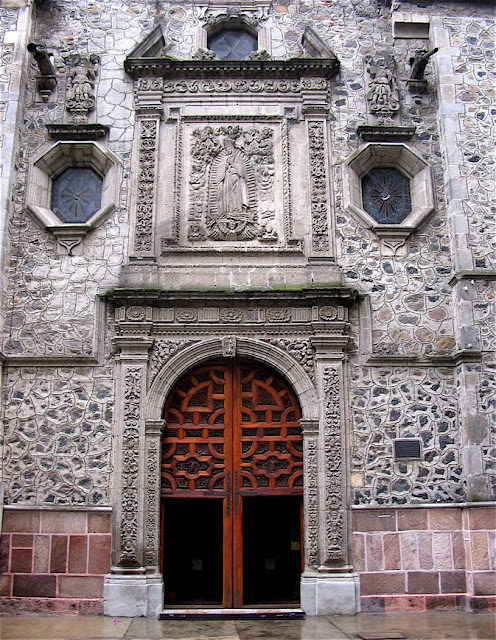 Mixcoac
Shrine of the Cloud Serpent
Located in the southern part of the city, also not far from Coyoacán, the imposing church of San Juan y Guadalupe—reputedly designed by Pedro de Arrieta, the prominent Mexico City architect and master of works at the Cathedral—presents an ornate 18th century front showcasing a grand bas relief of the Virgin of Guadalupe. 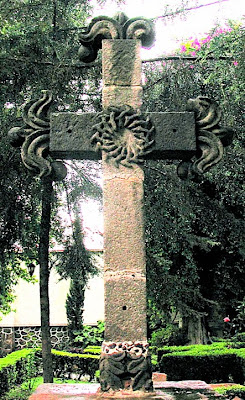 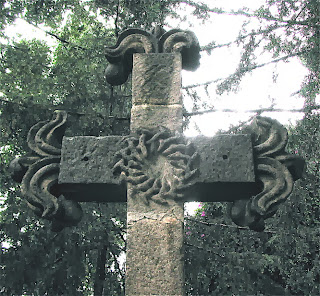 The Atrium Cross
The atrium cross at Mixcoac is of medium size and rectangular in section. It is set on a brick base beside the large garden in front of the church which it predates.
It follows the regional pattern of crosses, with prominent, curling, fleur-de-lis finials capping the arms and head. A unique embellishment here is the attachment to the extremities of each finial of three pomas, or large pearls, of which unfortunately only five of the original nine now remain.
As with its neighbors, no major Passion reliefs appear apart from an interwoven, spiny Crown of Thorns prominently placed at the crossing, although three inconspicuous Wound holes have been drilled on the arms and lower shaft; these house spikes used to attach seasonal decorations. 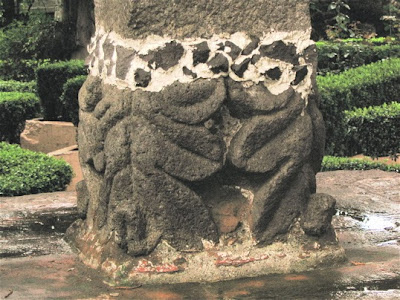 Like those at Axotla and Chimalistac, the unusual pedestal at the foot of the cross is a feature of particular interest, enfolded with feathery motifs on each corner—reminiscent of the pre-hispanic serpent bases found on several 16th century crosses and fonts, and possibly of Aztec origin. 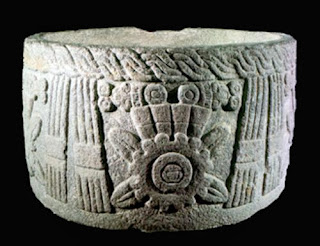 Another pre hispanic survival is the holy water font, formerly inside the church, probably a cuauhxicalli basin, inscribed with the Fifth Sun among other Aztec motifs.