The Altarpieces of Yucatan: the lost retablo mayor of Mérida Cathedral

As a seasonal offering, and as a preview of our forthcoming series on the colonial altarpieces of Yucatán, we update our page on two delightful polychrome reliefs of Nativity scenes—all that survives of the lost altarpiece of Mérida cathedral.

The Lost Retablo of Mérida Cathedral
During the infamous noche triste of September 24, 1915, an anticlerical mob inflamed by revolutionary zeal burst into Mérida cathedral and set about destroying its priceless contents.
These included the gilded, 17th century main altarpiece, which was ripped from its supports in the cathedral apse, stripped of its gold leaf, crudely dismembered, then carried out into the street and burned, along with several other side altars.
Happily, two painted relief panels in a charming, popular style survived the holocaust.  Both panels, beautifully crafted from local mahogany, have been recently restored and illustrate scenes from the Nativity of Christ.
One panel, depicting the Adoration of the Shepherds, is currently on display in the new Mérida City Museum. Although the infant Jesus and a cherub have sadly lost their heads, the other rustic figures are expressively portrayed.

The second relief, now in the collection of the site museum at Dzibilchaltún, illustrates the scene of the Adoration of the Magi, or Three Kings, rendered as an affecting folk tableau.
The Holy Family is shown facing the richly costumed Three Kings, whose hands, once holding their gifts, are now missing. The figures are simply but sympathetically depicted against a classical architectural background.
Note the folkloric touch of the heads of the ox and ass poking out between pilasters reminiscent of the cathedral portals. 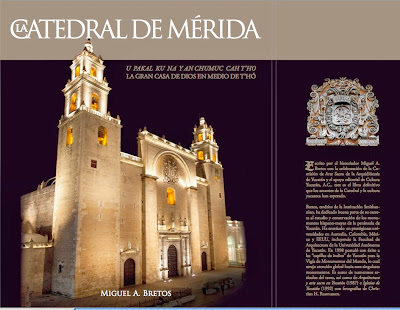 Mérida cathedral
An authoritative new history of the cathedral was recently published
by Miguel Bretos, the pre-eminent scholar of colonial Yucatán.

For complete details of the arts of colonial Yucatán and suggested travel itineraries
consult our updated guidebook
Posted by Richard Perry at 1:54 PM