In December 2012 we described a number of early "lost " missions in Yucatán.  This year we turn to a group of later colonial monuments in the peninsular: its church altarpieces.
Until recently many of these retablos were also on the point of being "lost," their carved and painted surfaces damaged or faded, and the underlying structures often close to collapse because of rot and insect damage.
Fortunately, in recent years several of these endangered colonial works have been saved from neglect and destruction and restored, thanks to the efforts of Fernando Garcés Fierro with the local office of INAH, as well as the organization Adopte una Obra de Arte under the leadership of Elba Villareal Rodríguez de García.
Formerly, the colonial altarpieces of Yucatan were considered provincial and secondary to those elsewhere in Mexico, but this view has now been challenged. While acting in a timely manner to save altarpieces in imminent danger of decay or collapse, these restoration projects have also revealed the color, richness and complexity of these colonial works of art and helped to define the distinctive regional style of these retablos, a body of religious art that complements the now widely recognized unique character of the colonial architecture of the region.

We start our review with the exceptional retablos of the church at San Bernardino de Sisal, near Valladolid in eastern Yucatán. 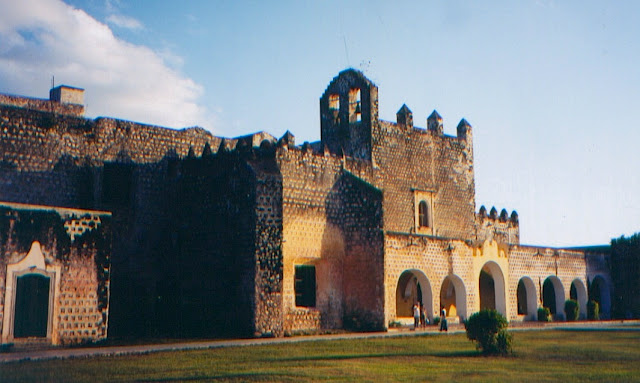 San Bernardino de Sisal is one of the handful of great 16th century Franciscan monasteries in Yucatán. Founded in 1560 and sited atop a vast underground cenote on the outskirts of Valladolid—Yucatán's second city—it was dedicated to the celebrated 15th-century Italian preacher and reformer Bernardino of Siena, known as the "second founder" of the Franciscan Order. 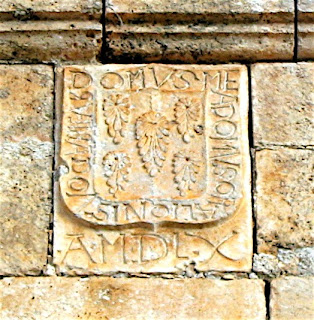 In common with all the early Franciscan monasteries in Yucatan, San Bernardino has a plain, fortress-like exterior, whose rugged walls are set with rows of heavy merlons.
The austere church front lacks an espadaña or towers; only a simple belfry stands above the north wall of the nave.  Beneath the choir window, a small relief of the Five Wounds (Stigmata) is inscribed with the the date 1560 in Roman numerals and the Latin legend, “My house will be called a house of prayer.” 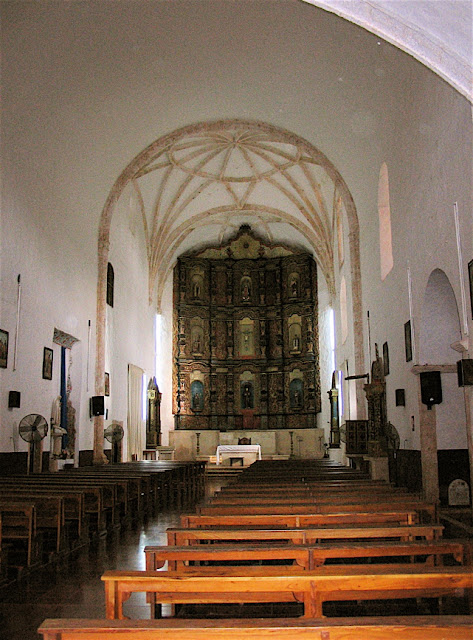 The long nave is covered by a smooth barrel vault as far as the sanctuary, whose shallow dome is embellished with a splendid "star and wheel" ribbed vault—the most elaborate Gothic style ceiling in Yucatán.
The church is also home to a remarkable group of retablos, fabricated in a variety of styles that span the colonial period. 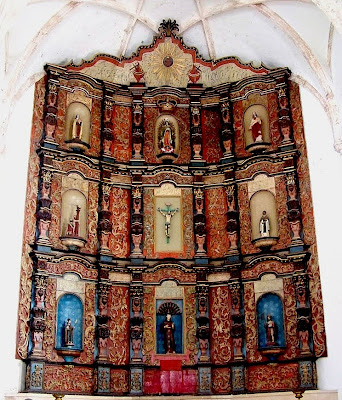 The Main Altarpiece
The enormous 18th century main altarpiece is one of a small group of large altarpieces in the Mexican Churrigueresque or barroco estípite style in Yucatán that include those at Tecoh and Maxcanú.    Ornate baroque estípite pilasters and gilded scrollwork are set against a background of red and blue. Of the original figures, only the statue of patron saint San Bernardino remains.
The Side Retablos
Standing along the nave is a trio of fine, late 16th or early 17th century altarpieces, similar in style to, and probably contemporary with those at Mani and Teabo. Their survival is little short of miraculous in historically turbulent Valladolid.
The first pair features a bold Renaissance framework, whose central shell niche is flanked by paired columns and surmounted by a carved entablature and sculpted pediment. Bulbous Plateresque columns are topped by finely detailed Corinthian capitals.
Carved and painted reliefs fill the pediments and the base panels. 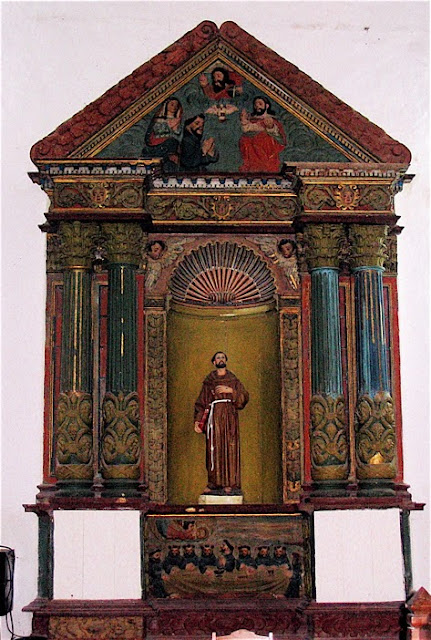 The retablo of St. Francis, on the south side, shows scenes from the life of the saint. The lower relief panel depicts the Last Supper of St. Francis—a very rare subject, especially in Mexican art. *
The saint is seated at table among bearded, tonsured friars as an angel descends with bread for the saint. Also unusual is the portrayal of the saint in the pediment, shown with the Holy Trinity but with the addition of the Virgin Mary. 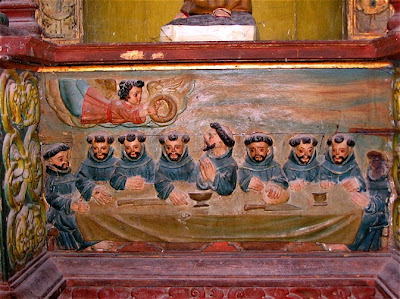 * To our knowledge, the only other documented representation of this subject is a painting in the collection of the San Angelo Museum of Art. From a cycle formerly housed in the grand Franciscan monastery of Antigua, Guatemala, it is the work of the noted Mexican baroque artist Cristóbal de Villalpando, and dates from c.1695. If anyone knows of any others we would like to hear from them. 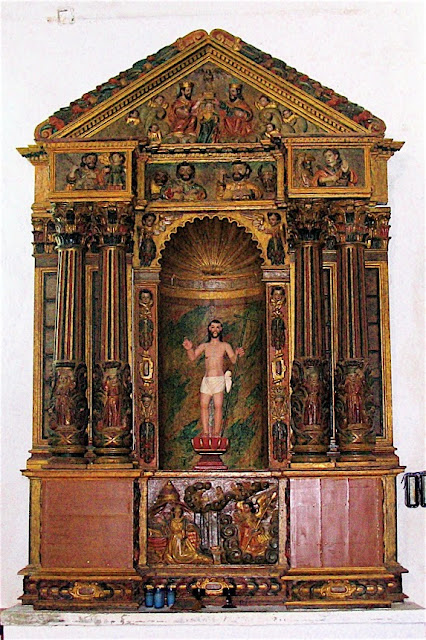 Its sister retablo is devoted to the Annunciation/Incarnation of the Virgin Mary and recently underwent a thorough restoration by conservators in Mexico City.
It is designed in identical style to the San Francisco altarpiece, except that here the columns are faced with robed caryatids holding baskets of flaming or bleeding hearts on their heads. Its finest feature is the finely carved and painted reliefs, whose original details and coloration have been brought out during the restoration process.
A bas-relief of the Annunciation with stylized clouds and putti appears on the recessed base panel. Ringed by whorls of clouds, the angel Gabriel gestures to the graceful, elegantly robed figure of the Virgin who kneels beneath an elaborate canopy.

An unusual feature of this relief is the physical representation of the Encarnation, in which God the Father in the cloud above sends the infant Jesus with the Holy Spirit down to the Virgin. This portrayal of  Jesus was considered heretical by the Church and banned by the Inquisition, which accounts for its relative rarity in Mexican art. 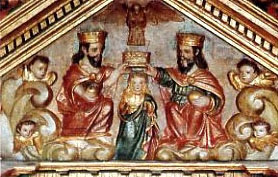 Polychrome reliefs of the Four Evangelists, each with his associated symbol, are boldly carved above the columns and the center niche.  And a charming if unorthodox relief of the Coronation of the Virgin by the Holy Trinity fills the pediment above. Christ and God the Father, both crowned, raise a third crown above the head of the child like Virgin Mary. The figures are flanked by scroll-like clouds and putti, while The Holy Spirit hovers overhead. 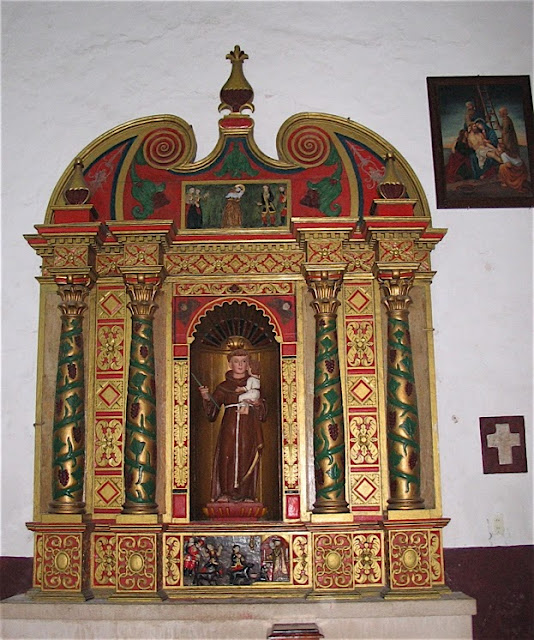 A third, related side altar, also now restored, is dedicated to San Bernardino, the patron saint of the monastery (although the present statue is of St Anthony of Padua).
A little later than the other two, it is framed by vine encrusted spiral columns in green and gold, and ornamented with scrolled reliefs, and like the others is carved with miniature scenes from the saint's life. 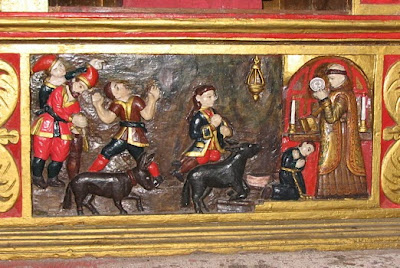 On the base panel, figures in colonial costume—one looking like an early Santa Claus—brings their animals to be blessed by the saint, who raises his traditional emblem of the host with a blazing sun enclosing the monogram of Christ (IHS). One of the episcopal miters he famously rejected lies on the table behind him.

See our map for the location of the retablos in this series
Support for restoration of the San Bernardino retablos came from the Barbachano family.

for complete details and suggested itineraries on the colonial monasteries and churches
of Yucatán, consult our classic guidebook.
Posted by Richard Perry at 12:28 PM