The Altarpieces of Yucatán. The Master of Mani 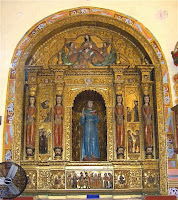 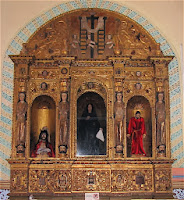 The Master of Mani
Aside from the retablo mayor and the apsidal mural, the other principal art treasure at Mani is an exceptional pair of Renaissance style altarpieces, that face each other across the nave.
Crafted in the 1600s by an unknown provincial artist, whom we may call the "Master of Mani", these exquisite gilded retablos, while essentially conventional in form, display a vigor and freshness that, in our view, makes them the equal of any Mexican work of the period.
Both take the form of a triumphal arch, surmounted by a recessed, rounded pediment. The lower compartments are divided by caryatid columns of great charm: the elongated figures of young maidens holding baskets of hearts are crowned by feathered capitals and stand on the bearded heads of heretics. 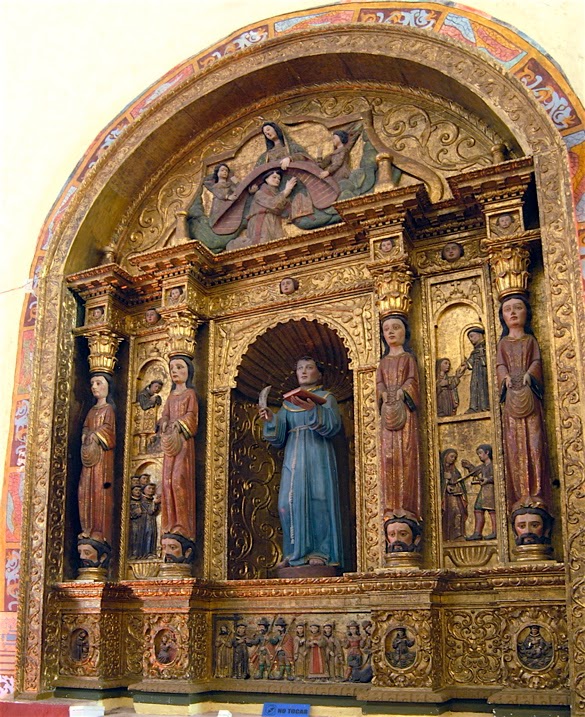 Retablo of St Anthony of Padua
The star of the show is the recently restored altarpiece on the south side of the nave dedicated to St. Anthony of Padua, a perennial Franciscan favorite, whose statue occupies the center niche. Between the columns a series of detailed reliefs depicts miraculous incidents from his life, each one a tightly structured tableau of realistic figures with expressive faces.

In the pediment, St. Anthony receives a priest's stole from the hands of the Virgin, while the large base relief relates the famous miracle of the donkey kneeling before the Holy Sacrament, peopled by figures in period costume.   A remarkable and imaginative work of art. 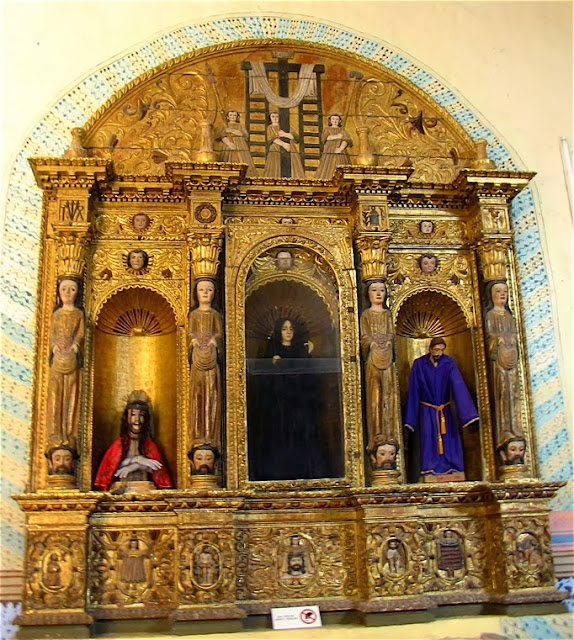 The "Dolores" Retablo
Its expansive companion piece across the nave on the north side is devoted to the Passion of Christ.  A statue of the Virgin of Sorrows occupies the center niche, while Passion symbols are displayed in cartouches along the predella. Intervening spaces are filled with cherubs and rich foliated carving.
A dramatic relief in the pediment shows Faith, Hope and Charity gathered around the draped cross with ladders, holding the Instruments of the Passion.

Note: another side retablo attributed to the Master of Mani may be seen at nearby Teabo.


See our map for the location of the retablos in this series
text © 2007 & 2012 Richard D. Perry.   Photography by the author and Robert Hansen