The Altarpieces of Yucatán. Mani: the retablo mayor

We follow up our inaugural post on the altarpieces of San Bernardino de Sisal with three posts detailing the celebrated and, in some cases, related retablos of Mani. The first is devoted to the retablo mayor. 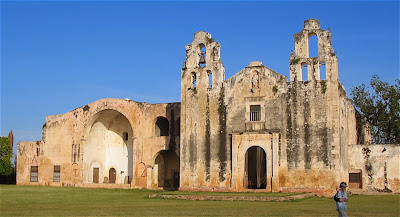 Mani, located 100 kms south of Mérida, was the seat of the powerful Xiu Maya clan. Following the Spanish conquest of Yucatán, Mani was chosen as the site for the first Franciscan mission in the region.    The monastery of San Miguel is especially noted for its great open chapel and fine early retablos.
Over the past few years, restoration work has been under way at the 16th century monastery. During this exciting project many historic artworks, artifacts and architectural details have been uncovered. 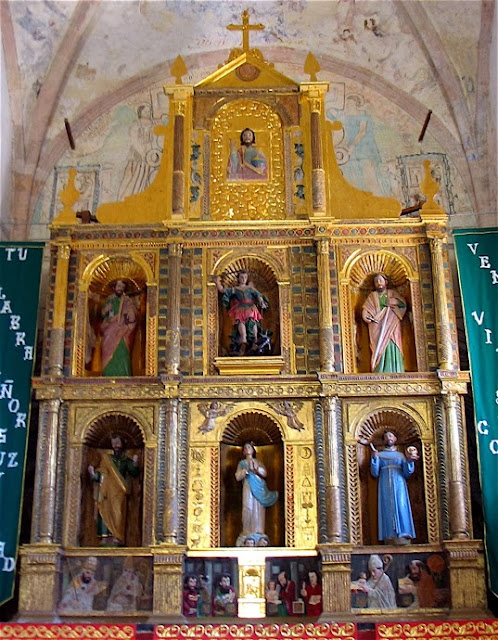 The Main Altarpiece
This elegant, triple tier retablo, recently restored, is a Yucatecan classic. Its harmonious lines are framed by decorative Plateresque style columns set against intricate passages of gilded relief with colorful accents of scrolls and foliage. The understated shell niches on both main levels are occupied by colorfully costumed saints from several periods. 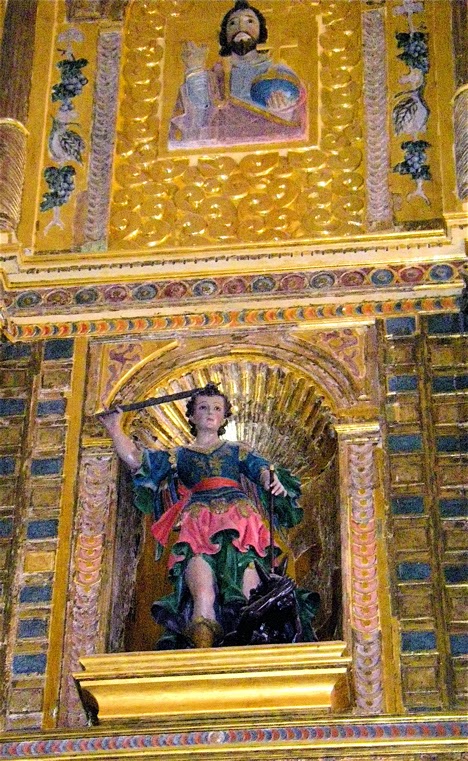 Mission patron saint Michael gestures from the center niche while a relief of El Padre Eterno looks down from the lofty crowning gable. 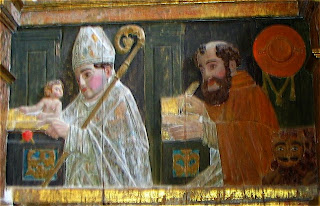 Of special interest are the folkloric painted reliefs along the base, or predella of the retablo, now restored to their original hues.
The Four Doctors of the Latin Church, with their classic attributes, look inwards to the folkloric Four Evangelists in the center panel, who in turn gaze toward the gilded tabernacle in the middle.
The Apsidal Mural
It was during the dismantling of the main altarpiece at Mani for restoration that an older mural was uncovered adorning the rear wall of the church. This large fresco, which fills the apse from floor to vault, took the form of a painted wall retablo and is believed to date from the late 1560s or 1570s (details)