The Altarpieces of Yucatán: Oxkutzcab 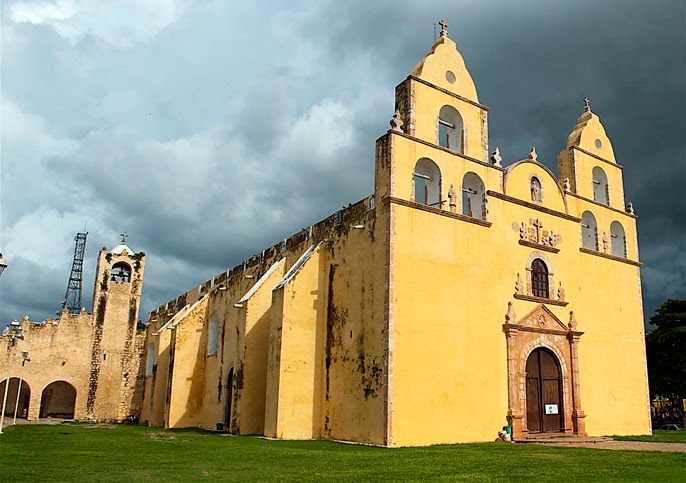 Oxkutzcab
Land of Plentiful Tobacco
Nestled against the eastern slope of the Puuc range of hills in western Yucatán, the market town of Oxkutzcab serves a rich agricultural area which produces abundant maize, tropical fruits and, of course, tobacco.
The historic Franciscan mission stands on an elevated site in the middle of town beside the main plaza. The broad, aisled church is the centerpiece of the mission, its late 17th century facade with classic twin belfries overlooking the teeming marketplace. 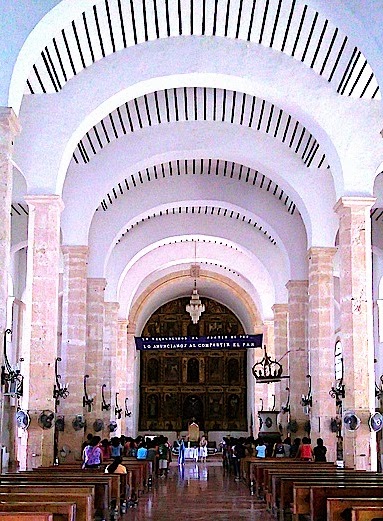 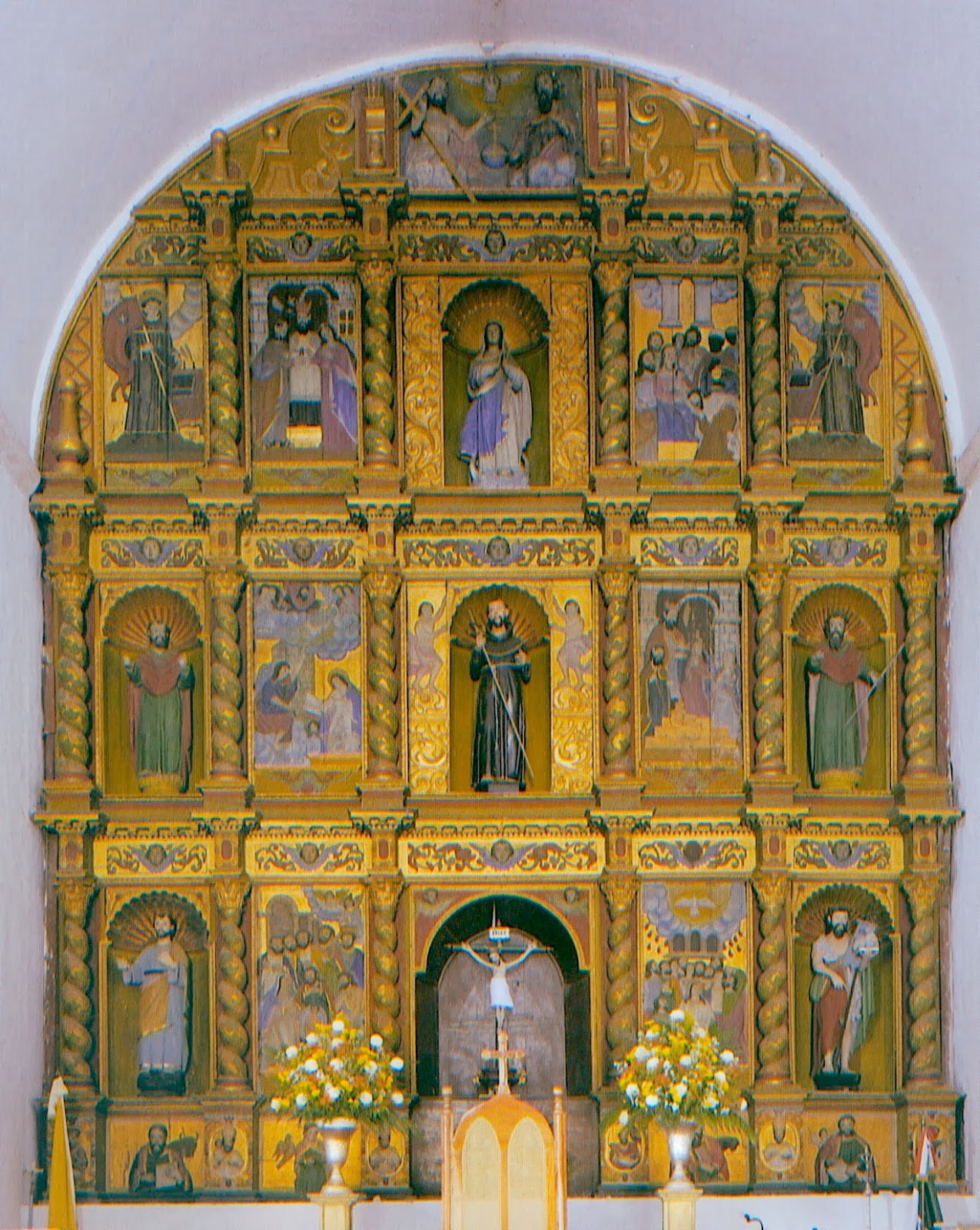 The Main Altarpiece
The most striking work of art at Oxkutzcab is the magnificent main retablo, lodged in the old open chapel or apse of the church.  It is one of a handful of baroque altarpieces in Yucatan to survive the Revolution and is closely related to the those at Tabi and Yaxcabá.
Although repainted in bright colors, the retablo retains its original, strong, sculptural qualities. Four tiers of relief panels and sculpted santos are boldly framed by green and gold Solomonic columns, embellished with twisted vines and capped by Corinthian capitals. The columns support gilded cornices, carved with delicate friezes of angel heads and swirling foliage.
Six main reliefs illustrate events surrounding the life of the Virgin and the Nativity of Christ: the Marriage of Mary and Joseph, the Annunciation, the Descent of the Holy Spirit, the Nativity, the Adoration of the Magi and the Presentation in the Temple.
Based on European print sources, the carvings have a medieval feeling infused with a strong folk aesthetic; the scenes have a static quality composed of densely grouped figures with stylized poses and draperies, and naive child-like expressions. 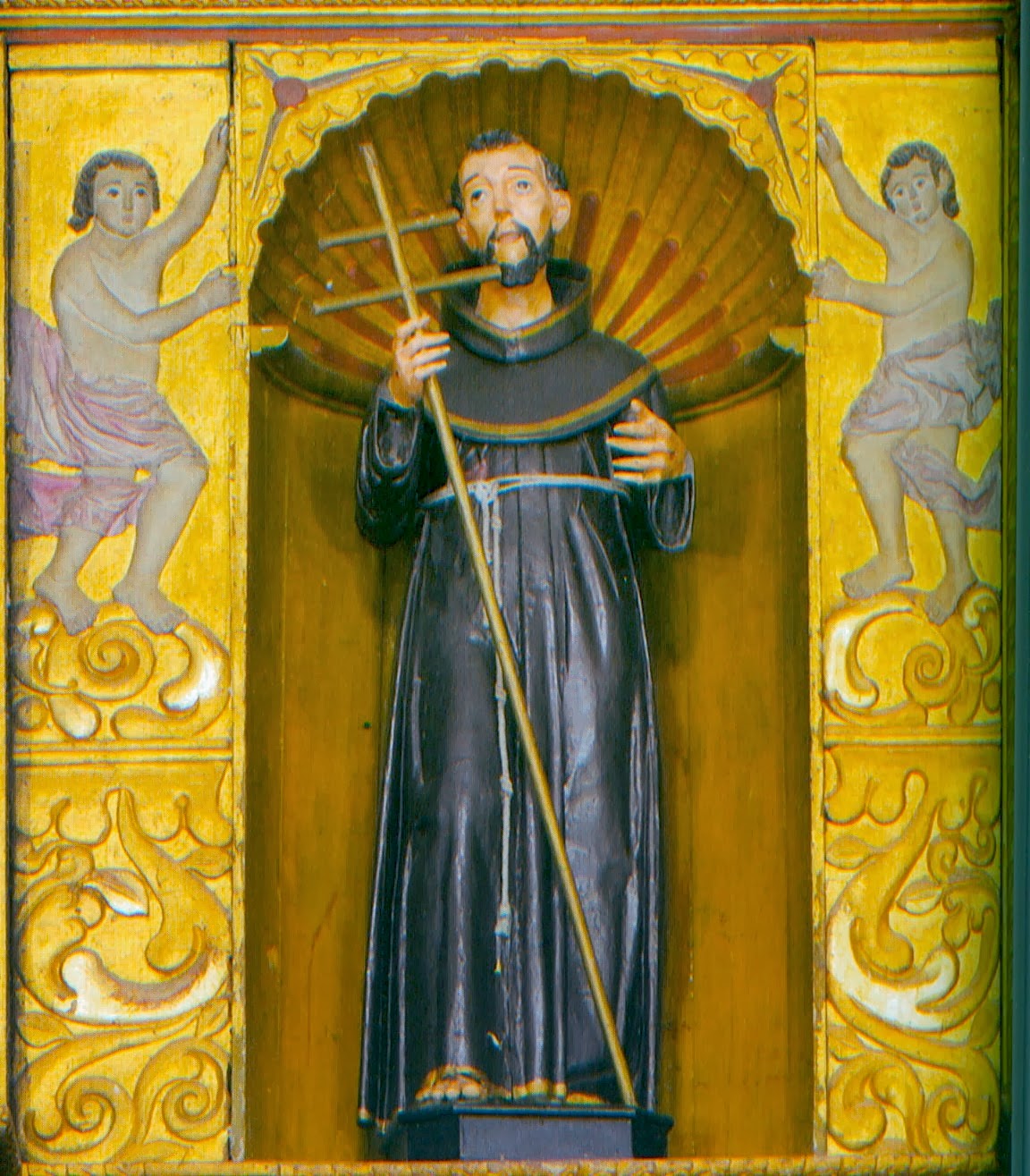 An image of the Virgin Mary (La Purísima) occupies the upper niche flanked by reliefs of Franciscan friars unfurling victory banners in the outer compartments.
The figure of St. Francis stands in the center niche, flanked by statues of Sts. Peter and Paul. John the Baptist appears on the lower tier with the popular Franciscan saint St. Nicholas of Bari, who is often adorned with ex-votos—tokens of thanks for answered prayers.

Along the base tier, panels depicting the Four Evangelists alternate with cartouches of the Four  Doctors of the Latin Church on the column pedestals.

for complete details and suggested itineraries on the colonial monasteries and churches
of Yucatán, consult our classic guidebook.
Posted by Richard Perry at 2:36 PM