The ancient Maya were obsessed by time. For them time was cyclical and they used complex calendrics to measure it.

The Maya month consisted of 20 named days which featured in two calendar systems: the conventional calendar year of 18 named months of 20 days each (plus the wayeb of 5 extra days to make up the 365,) and the tzolkín or sacred calendar of 260 days (13 x 20 = 260) by which Maya rituals were fixed. The number 13 was especially significant.
These two systems intermeshed in a complex manner to produce a complete cycle or Calendar Round of 52 years before starting anew.

In addition the Maya perfected what is termed the Long Count, which counted days in ascending vigesimal (x 20) units that in theory could stretch both back and forward in time almost indefinitely.

The largest and most important unit in the Long Count was the baktún of 1,820,000 days, or 395 years. And here, baktún 13  would be regarded as especially significant, marking some epochal event in the distant future — a date mentioned in some Maya inscriptions.


Then the sky is divided
And the land is raised up
Then there begins the Book of the 13 gods
And then arises the great flooding of the earth
With the raising of the awesome Itzam Cab
The ending of the Word....
The Book of Chilam Balam

This important period ending occurs in December 2012, this month, which has given rise to fears of apocalyptic change, maybe even the end of the world as we know it!

So for us December 2012 is perhaps an appropriate time to consider the ancient Maya legacy of Yucatán in relation to the early colonial missions there, in particular the so-called "lost" missions of the region.
Shortly after and even during the Spanish conquest of Yucatán in the 1540s by the Montejo family, Franciscan friars vigorously initiated the Catholic evangelization and missionization of the peninsula. This was rapidly accomplished in the following decades through a dense network of evangelical centers, consisting primarily of  visita missions in small towns and rural settlements. These were served by friars riding circuit from a handful of larger monasteries or conventos in the principal population centers.

Most of these early missions were established in existing native Maya settlements across the peninsula. Invariably these communities were centered around prehispanic religious complexes, usually of stone pyramids and temples linked by ceremonial causeways known as sacbeob.   In almost all cases, too, there was a cenote or natural well giving access to abundant ground water—essential for life in this mostly arid zone with no surface water.

Practically, the ancient ruins were also a ready source of prepared building stone as well as often existing foundations upon which to place the new churches.  That these might also acquire some of the sacred ambience or spiritual mana of the earlier temples was a further consideration.

Given the tropical climate of Yucatán, most of these early missions and chapels were of the "open air" variety—comprised of a rude masonry chapel flanked by a sacristy or baptistry. Most featured imposing arched openings and were in several cases domed, often with the addition of a belfry. These open chapels were fronted by a pole-and-thatch nave or ramada to shelter the neophyte congregation from the sun.

Over time, most of these visitas flourished, and the ephemeral ramadas were replaced by masonry naves with stone facades and belfries, although some retained their thatched roofs until late in the colonial period and into modern times.
The original open chapels then usually served as the sanctuary or chancel of the new church—a T-plan configuration that can still be seen in villages all across Yucatán.

The Lost Missions
Inevitably, several of these early missions failed and were abandoned, primarily because of population loss due to disease and dislocation.
But because of their premature demise, the remains of a handful of these abandoned open air missions, or "ramada chapels" as they are also known, have survived, at least in part, in their original condition.

While these show considerable variety in their scale, configuration and intended function, together they give us insight into the early development and evolution of mission design in Yucatán. 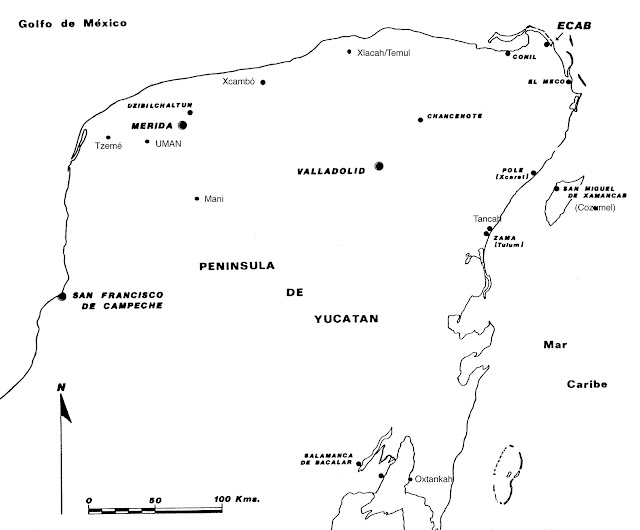 Our forthcoming posts focus on twelve of these remnant missions, distributed across the Yucatán peninsula from west to east, all of which are located within or beside ancient Mayan archeological sites:

Note. In preparing this series, we should like to acknowledge our debt to the pioneering work of the eminent archeologist and historian Anthony P. Andrews. In illustrating the pages we have drawn on maps, graphics and photographs from a variety of sources including the internet, all of which we have acknowledged to the best of our ability.   We apologize for any errors or omissions and welcome corrections or comments.

http://colonialmexico.blogspot.com/2015/03/arts-of-colonial-mexico-guidebooks.html
For more on the history and art of the Yucatán missions, consult our published guides.
Posted by Richard Perry at 9:18 PM