While the colonial missions of Dzibilchaltún and Xcambó are mostly restored and fairly well known, another more recent discovery, also located in the precincts of an ancient Maya settlement about 30 kilometers west of Merida, is neither. 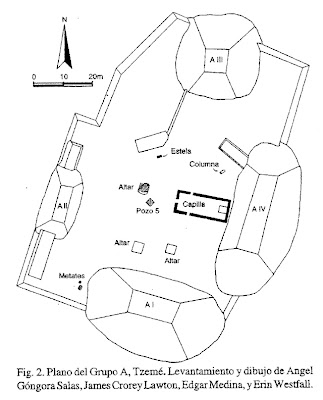 Now uninhabited, Tzemé was an important Maya archeological site from the Classic period. The city boasted numerous temples and pyramid structures, so far unrestored and little explored.
A ground survey of Tzemé in 1999 uncovered the hitherto unknown remnants of a modest colonial chapel, located inside the walled enclosure of the principal ceremonial center. 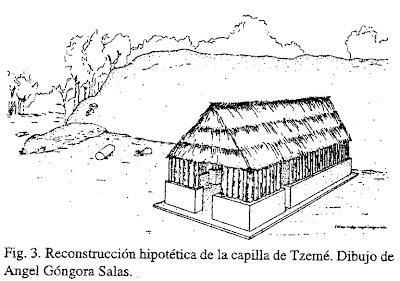 The rectangular chapel, probably dating from the mid to late 1500s, was founded upon one of the lesser temple platforms. The simple chapel was apparently bounded on all sides by waist high stone walls—much like the chapel at Xcaret.

These walls no doubt originally supported an open pole-and-thatch ramada. A west entrance was cut into the walls, as were a pair of narrow lateral doorways, also near the west end.
There is no evidence of an arched sanctuary or belfry, although remains of a stone altar survive at the eastern end.

Kinchil
A dependency of the convento at Hunucmá, the colonial settlement of Tzemé, although dwindling, survived until the late 1700s, when it was absorbed into nearby Kinchil.

Kinchil also possesses an early mission, whose substantial 16th century open chapel—constructed like most of the colonial buildings here with Maya stones from ancient Tzemé—is fronted by a later nave and imposing 19th century church front with twin towers.

Despite the extensive Maya site, the diminishing importance of Tzemé in early colonial times may account for the very modest scale of the chapel here and its failure to grow into a more substantial mission over time.

In preparing this series, we should like to acknowledge our debt to the pioneering work of the eminent archeologist and historian Anthony P. Andrews

For more on the history and art of the Yucatan missions, consult our published guides.
Posted by Richard Perry at 8:59 AM