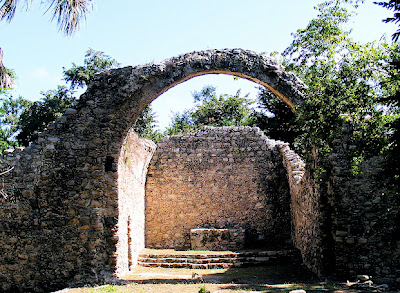 The southernmost of the lost Yucatán missions occupies a coastal site known as Oxtankah/Tamalcab.
Oxtankah is an extensive Mayan archaeological site, located beside the seasonal island of Tamalcab, 16km north of Chetumal, the capital city of the State of Quintana Róo. 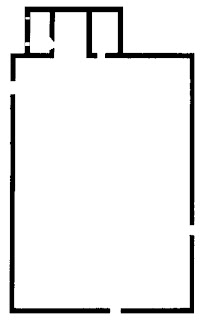 Built on a broad, raised foundation—a former temple platform —the rectangular chapel was at one time fronted by a pole and thatch nave. All that stands of the mission today is the original open chapel or apse of the church. 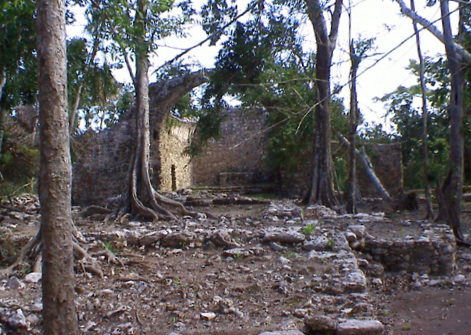 Constructed of rubblestone (mamposteria) this now roofless but clearly substantial structure is identified by its surviving arch.  The chapel, probably originally covered by a stone barrel vault, or bovedilla, retains its raised altar and a lateral doorway to the former side room—probably the sacristy or friar's quarters.
text: © 2012 Richard D. Perry.  Photography: © I D Rangel et al
In editing this series, we should like to acknowledge our debt to the pioneering work of the eminent Yucatan archeologist and historian Anthony P. Andrews

For more on the history and art of the Yucatan missions, consult our published guides.
Posted by Richard Perry at 1:37 PM