The east coast of the Yucatan peninsula, now the state of Quintana Roo, was the first area to be missionized by the Franciscans in the mid 1500s.  Primitive chapels were established in the numerous Maya trading settlements along the coast, from Ecab to Chetumal and beyond.
Recent development of tourism along sections of the "Costa Maya" has all but obliterated several of these early missions, including the mission of San Miguel on Cozumel, razed to build the airport there!
However some traces of the missions remain, which indicate how the innovative T-shaped "open air" church first developed along this coast and was later adopted and expanded across the entire peninsula during the colonial period.  Here we look at two such remnant early visitas, Xcaret and Tankah.

Xcaret
Located south of Cancún, this major Maya settlement on the east coast of Yucatan, formerly known as Polé, was a flourishing trading hub and embarkation point for Cozumel island in ancient times.
After the Spanish conquest, this role was eclipsed although there were enough Maya residents there to justify the building of a modest Franciscan mission some time in the mid to early 1500s. The settlement and its mission were probably abandoned late in the century.

The now razed mission, at one time a dependency of Ecab, was the only colonial structure located among a large number of scattered Maya ruins.

A primitive chapel may have been founded here as early as 1528, even before the Spanish conquest of Yucatan was complete, and probably continued to be expanded and in use as late as 1580. 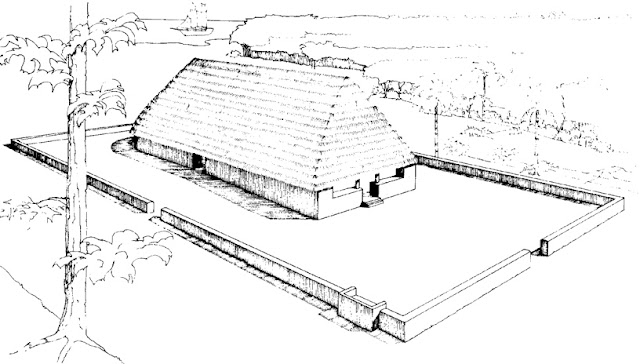 The mission was a substantial one, set within a rectangular, walled precinct or atrium. The church building was a fairly standard early open ramada chapel, but with some atypical features:
Tankah

Located between Xelhá and Tulum but now also lost to development, traces of the mission at the neighboring Maya site of Tankah, survived into the 1960s, allowing for some idea of the plan.
A simple, flared masonry chapel, probably arched, opened into a covered ramada, possibly with stone foundations or low nave wall, that narrowed towards the opposite end.
Foundations were also traced of a trapezoidal atrium wall enclosing the mission, possibly of a defensive nature.

For more on the history and art of the Yucatan missions, consult our published guides.

Posted by Richard Perry at 1:38 PM