The Passion Crosses of Puebla

The City of Puebla is celebrated for its many fine colonial churches and nunneries. In colonial times many of these boasted large, walled forecourts, containing ancillary buildings and carved stone crosses. Street widening and other changes in the 19th century, resulted in the loss of many of these spaces and their structures including the crosses.
In this post we look at a special selection of city crosses that share a common form and pattern of ornament. Like others across Puebla and the adjacent state of Tlaxcala, they are distinguished by their slender arms and tall shafts, conspicuously headed by often ornate INRI plaques.
But setting this group apart stylistically are their boldly carved reliefs of classic Passion symbols. While most have survived, in their original locations or elsewhere, others have gone missing even in recent times. 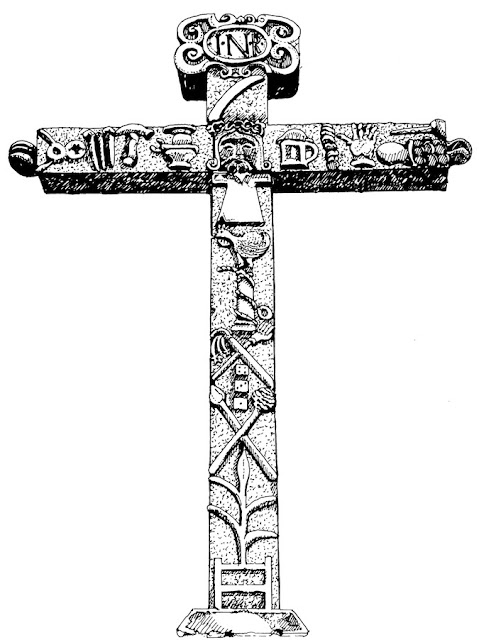 This early 19th century church of the Sacred Heart of Jesus was built next to the old Mercedarian convent in the north west quadrant of the city.
Now set against the partially tiled front, the cross is crafted in the classic attenuated Pueblan style, its arms and shaft liberally carved with a full complement of evenly spaced and simply outlined Passion reliefs.—a model for the others in this group.
Objects of note include a Corn plant, what appears to be a Lantern in the form of a beer stein!, and a crowned Face of Christ reminiscent of a face card in a deck of playing cards. A typical, lozenge shaped INRI scroll heads the cross, although here, the “I” has been omitted. 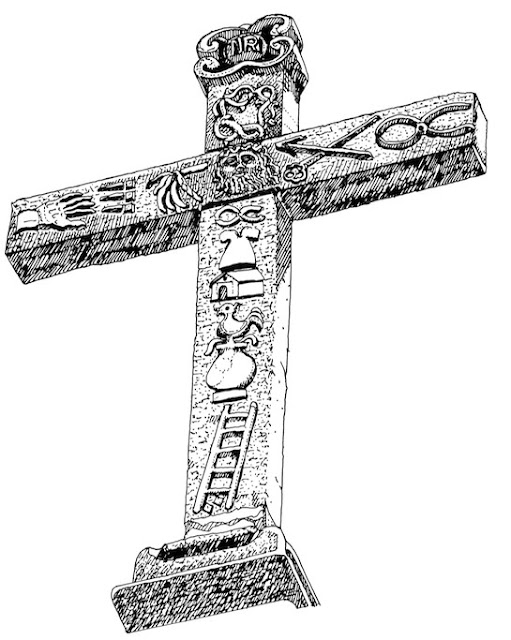 Nuestra Señora del Carmen
Founded as a modest barrio chapel or ermita in the 1500s, this chapel was taken over and greatly expanded into a conventual complex by the Discalced Carmelites in the 17th century. Although refurbished in recent times, the structures and much of the exuberant tile and stucco work dates from that period.
Overlooking the shrunken inner courtyard, the putative former atrium cross is now mounted atop the gable of the church. As at nearby El Sagrado Corazón, it is profusely carved with Passion symbols in low relief along the severely rectangular arms and shaft.
Curly locks fringe the Face at the crossing with a simple woven Crown raised on the neck above. The Rooster perches atop a jug like Column and a pair of Dice have been squeezed, almost as an afterthought, at the foot of the Ladder. The only unconventional object is the outline of a house or chapel with an alfiz below the Tunic on the upper shaft. Again, the cross is capped by an oval INRI plaque with tightly scrolled ingrowing volutes.

Two virtually identical crosses in a similar style are found in the former barrio chapel of Candelaria Xonaca, located in an eastern section of the city. 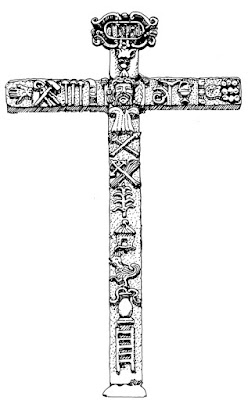 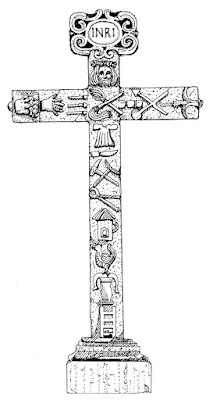 Xonaca, the Wall Cross;                            the Atrium Cross.
1. The Wall Cross
The ultra slim wall cross displays a multiplicity of Instruments and Passion objects, carved in almost glyph-like bas relief and extending to the edges of the borderless arms and shaft. The only exception is the more finely modeled crowned Face of Christ, framed by a verónica, at its axis.


2. The Atrium Cross
This freestanding cross in front of the church portrays the Passion objects in the same, sometimes idiosyncratic, manner and in almost the same positions, including a curious, house like Lantern with a roof and door opening on the shaft. However, the Face is carved on the neck while crossed Scourges occupy the axis—a most unusual placement.
The Parian Cross
Mounted in the busy, downtown Parian market, this cross is very similar in style and composition to the others we have seen. 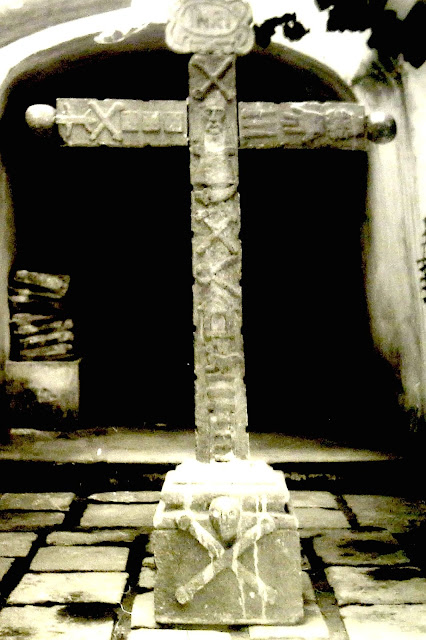 The "Theater" cross
A Lost Cross

As noted, many of the old colonial crosses in Puebla have been lost or misplaced. Photographs taken in the 1970s document another freestanding cross, crafted in the same style as the others, last seen in front of a local theater. Hope remains that it may still survive somewhere in the city. 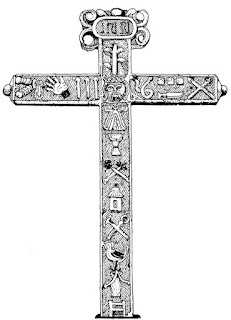 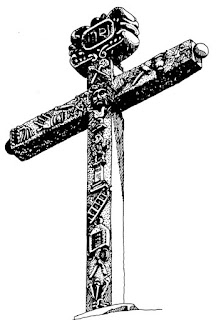