For our initial post of 2015, and as an introduction to our new series on Mexican stone retablos, we look at one of the most distinctive and unusual Pueblan churches, that of San José Chiapa, located northeast of the city of Puebla close to the state of Tlaxcala in the shadow of the volcano Malitzín.
In addition to an intriguing back story, San José Chiapa boasts dramatic architecture and rare works of art including its luminous main altarpiece.
But first the history:
San José Chiapa enjoys a special association with the flamboyant and controversial Juan de Palafox y Mendoza, a 17th century bishop of Puebla and briefly the archbishop and viceroy of New Spain, whose sumptuous library remains one of Puebla’s prime attractions.
Among the many political and ecclesiastical issues in which he was embroiled, his conflict with the Jesuits in Puebla was the most bitter. His attempt to secularize the holdings of the religious orders and secure their traditional tithes, thus increasing Crown and episcopal revenues, was firmly resisted by the Jesuits, prompting a protracted series of lawsuits, papal proclamations and political maneuvering.
Things reached a point in 1647, when, under threat of arrest by the incoming viceroy and fearing subsequent local unrest, Palafox fled the city of Puebla to take refuge in the remote highland village of San José Chiapa with its rustic local chapel.
Although Palafox ultimately failed in his bid to humble the Jesuits, the state of Puebla and the community of San José Chiapa did not forget him.
A century later, in the mid 1700s, the then bishop of Puebla, Francisco Fabián y Fuero, built the present church to honor Palafox. It was completed in 1769—as it happened, only two years after the expulsion of the Jesuits from Mexico.
This history is reflected in the design and iconography of the striking church front as well as the unique main altarpiece inside. 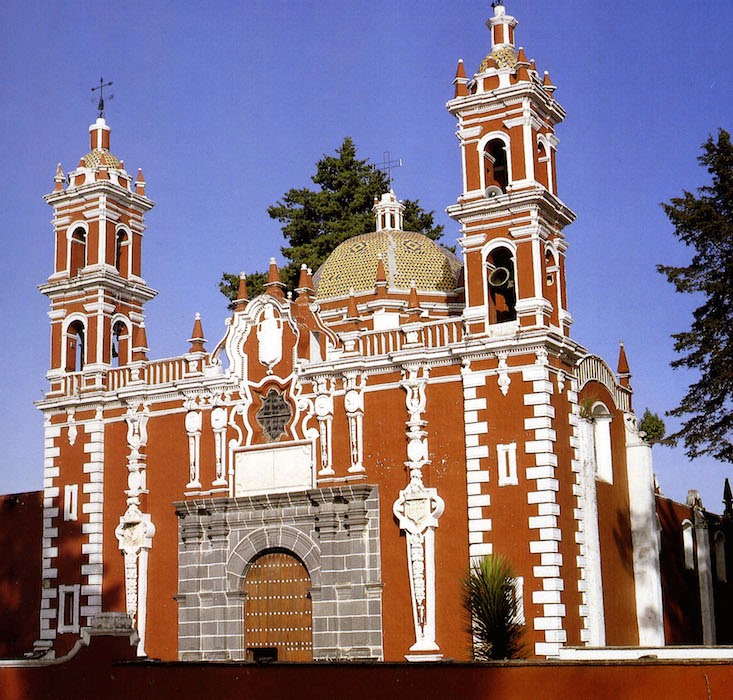 Although the eclectic front of San José Chiapa features a soberly classical, grey stone entry like many churches in the city of Puebla, by contrast the rest of the broad front follows the colorful baroque style of other poblano facades.
Its most prominent decorative elements are the brilliantly whitewashed estípite pilasters to either side of the porch, set dramatically against a painted, brick red background and incorporating painted relief medallions.
The three principal escutcheons emphasize the special connection with Bishop Palafox. The two flanking the entry are emblazoned with heraldic shields like those in the 1728 portrait (above).
On the right are the arms of the noble Palafox y Mendoza family of Aragon, and to the left, the Palafox episcopal seal—a heart with a crucifix inscribed with his motto "The Crucifix is My Love" framed by a tasseled galero hat.
The third escutcheon, in the overhead gable, displays the Spanish Royal arms with the quartered lions and castles of Leon and Castile at center, surrounded by other symbols and framed by the chain of the aristocratic Order of the Golden Fleece—intended as a tribute to Bishop Palafox' devoted support of royal authority.
Since most Spanish royal insignia have been erased from Mexican buildings since Independence, this remains one of the few still in place. 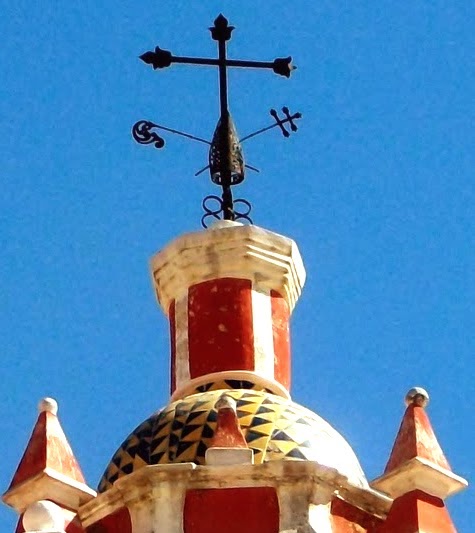 Slender neoclassical bell towers with tiled cupolas complete the picture. Of special interest are the forged iron crosses atop the cupolas, which bear the archiepiscopal insignia of the miter, crozier and patriarchal cross. 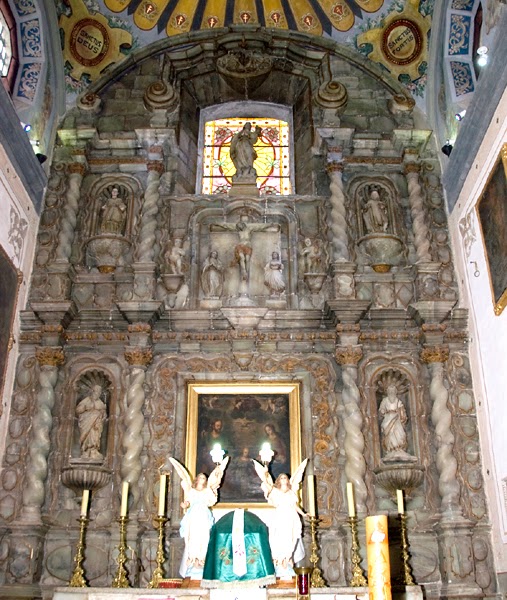 The Retablo Mayor
Inside the church, the imposing main altarpiece is one among a rare handful of Mexican retablos carved in stone* instead of the customary wood.
In addition, the chosen stone is tecali, or Mexican alabaster, a colorfully striated, translucent marble that is quarried in Puebla in a variety of tints—here a warm silvery/green.
Probably dating from the late 1760s, the altarpiece features twisted, salamónica columns and several stone statues of saints, including the Virgin Mary swaying against the window.
The centerpiece of the retablo is the Crucifixion with the Two Marys—no doubt a reference to Bishop Palafox' motto—an amazing work of art especially considering the difficulty in working this kind of stone. 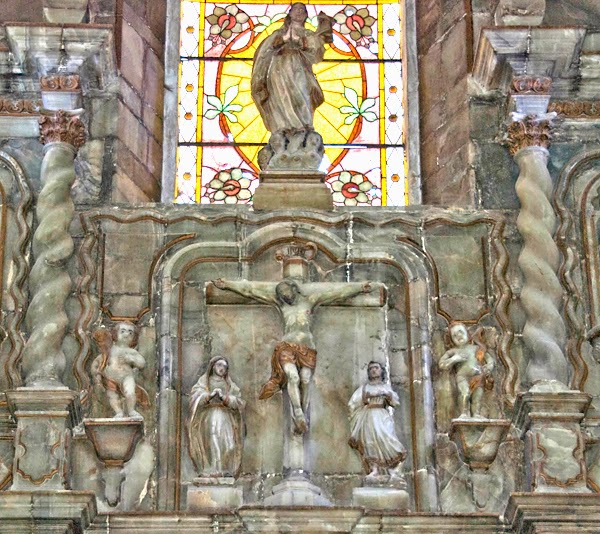 Updates:
Recently, after centuries of petitioning, Bishop Palafox has been beatified, the first stage in eventual canonization, testimony to his continued relevance and veneration among poblanos.
As we shall see, Palafox was also involved in another seminal stone altarpiece in Puebla.

* Other late colonial stone retablos in Mexico include those in the cathedrals of Puebla (Los Reyes) and Chihuahua, The Santuario de Guadalupe in Aguascalientes, El Carmen in San Luis Potosí, San Pablo El Viejo in Mexico City and Huentitán near Guadalajara, several of which we plan to describe in future posts.

We accept no ads. If you enjoy our posts you may support our efforts
by buying our guidebooks on colonial Mexico
Posted by Richard Perry at 3:21 PM