From the cathedral in Puebla we now turn north to Chihuahua cathedral.  Among its many other treasures, three stone altarpieces stand in the cathedral: the retablo mayor in the apse and two lateral retablos in the nave, albeit much later than the Puebla altarpiece.
The main altarpiece (retablo mayor) replaced a more ornate "churrigueresque" retablo in the 1790s, but was significantly altered in the 1930s when a neoclassical altar with fluted Corinthian columns was added in front, obscuring much of the original.
The colonial structure, of which only the outer columns and sculpture niches are still visible, was the ultimate work of the Durango architect and designer Nicolás Morín and is dated 1791/2.  Nicolás died in 1791 however and the altarpiece was completed by his son Ignacio.
To judge by old photographs, the original design was in an elegant but restrained late baroque style, with tall, slender estípite columns, ornate bescrolled niches and lambrequin pendants—a mode that was already outdated by the 1790s. 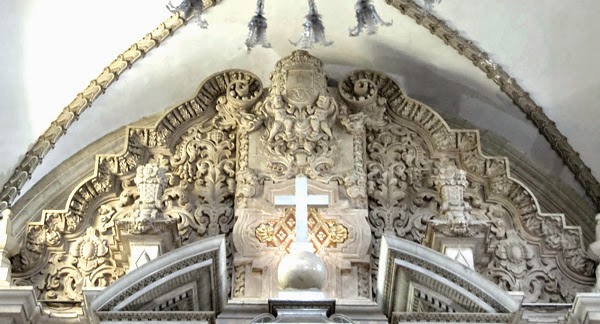 Following the 1930s addition, in the 1940s the modest undulating pediment, housing statues of the Virtues, Faith, Hope and Charity, was replaced by a flashy, neo rococo gable.

Currently, the statues in the side niches are those of San Felipe and, on the left, a handsome colonial folk image of the Virgin of Regla (repositioned from one of the side altars) which replaced the original figure of Santiago.
text © 2015 Richard D. Perry. color images by Niccolò Brooker except where noted.
Posted by Richard Perry at 9:35 PM