In earlier posts in this series we featured the stone altarpieces at San José Chiapa, Puebla Cathedral, Guadalupe in Aguascalientes, Chihuahua cathedral and San Pablo El Viejo in Mexico City.
Although it is beyond our usual purview, we now look at another exceptional stone altarpiece, this time across the border in New Mexico.

La Castrense Altarpiece
In 1756, the Spanish military engineer and cartographer Bernardo de Miera y Pacheco was brought to Santa Fé by Governor Francisco Antonio Marín del Valle, to create a detailed map* of the province.  This was duly published two years later—a brilliant achievement.
In addition to his other skills, Miera y Pacheco was also a sculptor and designer with knowledge of contemporary artistic currents in Mexico, and soon after his map making project, he started work on this remarkable altarpiece—a monumental work unique in the religious art of New Mexico.
Carved entirely from three enormous slabs of locally quarried limestone, it was completed in 1761 for the new military chapel of La Castrense, in downtown Santa Fé—another pet project of the governor.
This chapel, dedicated to Our Lady of Light, fell into disrepair and in 1859 was demolished, when its great retablo was moved to the cathedral, only to be later dismantled.
Rescued from storage and reassembled in the 1930s, it now resides in the nearby church of El Cristo Rey, where it is dramatically lit by the afternoon sun through transverse clerestory windows above the sanctuary—a distinctive New Mexico architectural feature. 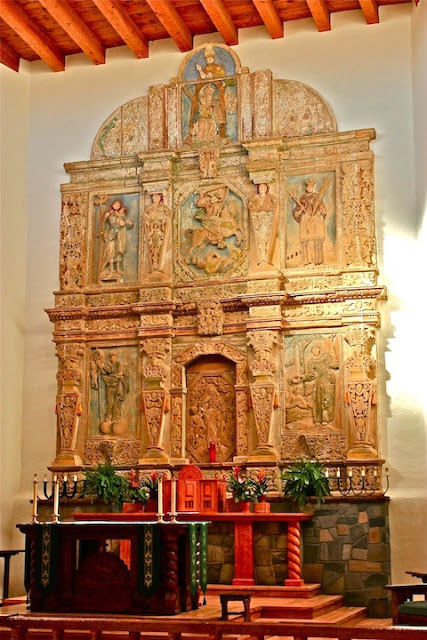 Still in a good state of preservation, the altarpiece follows the orderly pattern of Mexican baroque retablo design in the late colonial period, in which images of saints—often paintings but in this case carved, painted reliefs—are displayed in tiers and framed by decorative columns or supports.
Here the supports take the form of bulbous estípite pilasters, a signature feature of many mid 18th century Mexican altarpieces, some incorporating busts and caryatids, some with three heads and others with native features. 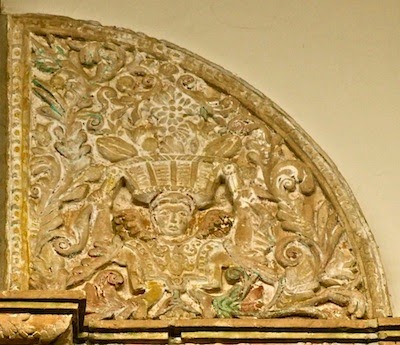 Angels with cornucopia occupy the gable ends while bands of foliated ornament adorn the cornices and intervening spaces throughout. Numerous traces of pigment in the reliefs indicate that the altarpiece was once brilliantly colored.

The Imagery
Iconographically the altarpiece also holds much of interest. Today the retablo is still officially dedicated to Our Lady of Light, whose cult, promoted by the Jesuits, enjoyed a great vogue in Mexico and the borderlands after the mid-1700s.
The stone relief image appears in an octagonal frame in the lower center niche. Its washed out appearance and poor fit in the niche are due to the fact that the relief was originally placed in the facade of the chapel and saved before its demolition. Later it was placed in the lower niche, which formerly held a statue.
Our Lady of Light is portrayed in her classic pose: accompanied on one side by an angel holding up a basket of flaming hearts to the infant Jesus, and on the other rescuing a youth from the jaws of hell.
Although cracked and weathered, the relief has a more sophisticated, if conventional appearance than the other, more folkloric reliefs, although with less character to the eye of this viewer, suggesting a later, possibly post colonial date.

The presence of Franciscan and Jesuit saints in the same altarpiece may reflect the conflict or power struggle raging between the two missionary Orders in the borderlands at that time—a conflict that was settled when the Jesuits were summarily expelled from the New World in 1767 and their missions transferred to the Franciscans.

Aside from its intrinsic historical and artistic interest, this spectacular altarpiece and its imagery are believed to have inspired many later santeros in New Mexico.

Posted by Richard Perry at 1:48 PM