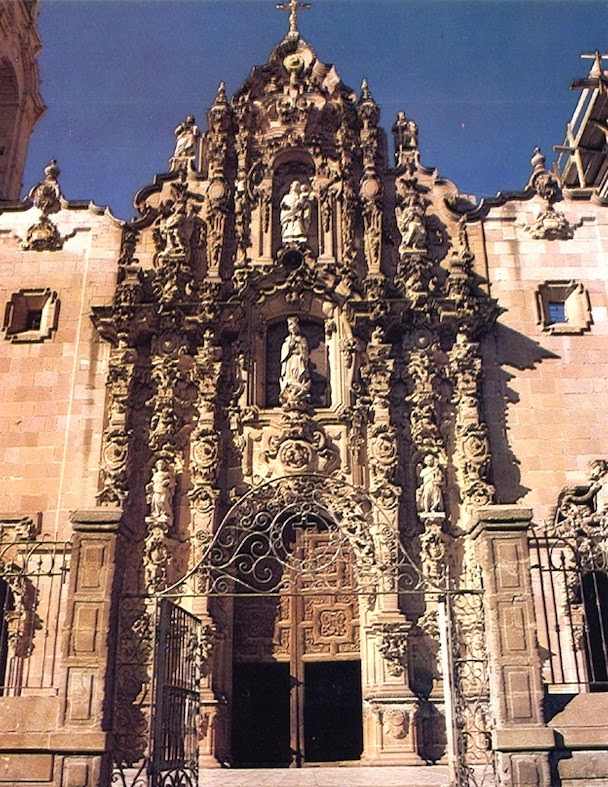 El Santuario de Guadalupe
Located on Guadalupe St, in the barrio of the same name close to the historic center of Aguascalientes, the Santuario of Guadalupe is considered one of the most important and original of all the city churches.
It may be the most fully realized, as well as the most ornate, of Felipe de Ureña’s architectural projects in Mexico.  Construction began in 1767 but was not completed until after Felipe's death in 1777, under the hand of his son Francisco Bruno.
Nevertheless, he drew up the plans, designed the facade and probably most other ornamental details, inside and out, as well as personally supervising much of the early construction. 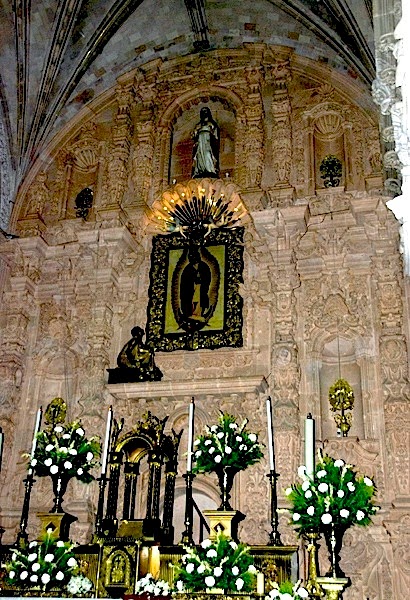 Like other altarpieces in this series, there have been changes over the years. With son-in-law Juan García de Castañeda, Felipe also designed and fabricated the main wooden altarpiece, which was tragically destroyed in the 1800s and replaced by a dull neoclassical altar.
This in turn was replaced in the early 1900s by an expansive replica in stone and stucco, approximating Ureña's original design, by architect Refugio Reyes, who later added many features in felipense style.  It was reinstalled (reworked?) in the 1970s by the prolific architect and architectural historian Victor Manuel Villegas.
Even in this broad replica we can recognize the classic Ureña lines: a wide center pavilion, here showcasing the Alcíbar panel, flanked by giant pairs of estípite columns/pilasters enclosing ornamental shell niches, now empty.
This motif is repeated on a smaller scale in the crowning gable.  Although the original dramatic effect of painted baroque statuary against glowing, gilded wood has been lost, the masterly deployment of sumptuous but controlled ornament in a coherent design remains. Today the sole surviving fragment of the original Ureña altarpiece is the 1777 painting of the Virgin of Guadalupe by José de Alcíbar.

Look for our forthcoming posts on more Ureña retablos