In previous posts on the seminal Franciscan monastery of San Miguel Huejotzingo we looked at the north doorway, the posa chapels, the church murals, the convento murals and an intriguing painting in the nave.
Here we describe the recently restored, historic main altarpiece in the apse of the church—one of the great treasures of Mexican colonial art. Nine altarpieces, in styles from every colonial period, line the nave at Huejotzingo. But the masterwork of this collection is the retablo mayor, one of two superlative 16th century altarpieces to survive in Mexico—the other being the main retablo at Xochimilco.
Like the Xochimilco altarpiece, the Huejotzingo retablo reflects the religious concerns and evolving artistic tastes of the period. For unlike the architecture of the church, which draws on a medieval past, the Pereyns altarpiece looks to the future. It is considered a pivotal work in the stylistic transition from the Plateresque to the Renaissance in Mexican religious art.
Simon Pereyns was a Flemish court painter who came to Mexico in the 1560s. He established a workshop in the capital that attracted some of the best European artists and craftsmen of the time who, drawn by new opportunities in the Americas introduced the innovations of the Renaissance.
Completed in 1586 and signed by Pereyns, the Huejotzingo altarpiece was a collaborative effort. Pereyns himself supervised the overall design and executed most of the paintings. While the statuary is largely attributed to the Andalusian sculptor Pedro de Requena, Pereyns, also a skilled sculptor, may have executed some of them. Members of Pereyns' workshop, including native artisans, were responsible for the architectural carving, painting and gilding. 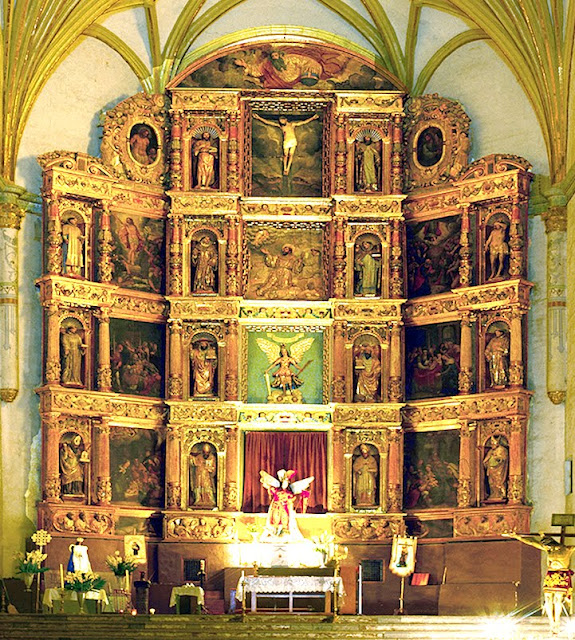 Four tiers high and divided into seven vertical calles, the altarpiece soars to fill the polygonal apse. The sides flare forward like a folding screen into the nave, enticing the spectator into its mysteries.
The framework is highly structured. Doric and Ionic columns with carved and fluted shafts articulate the lower two tiers, changing in the upper tiers to ornate baluster columns—signature markers of this transitional Renaissance-Plateresque phase.
Classical cupids and garlands festoon the shell niches and the intervening panels. Even a few tentative baroque touches—scrolled pediments and oval frames—make an appearance in the top tier of the altarpiece. 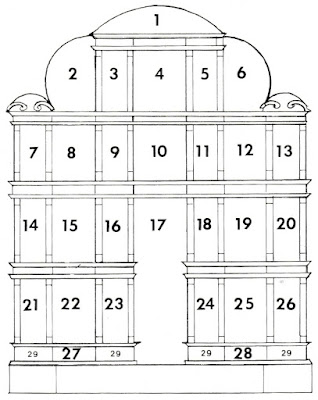 As with every work of art at Huejotzingo, the altarpiece has a message. Its iconography links the story of Christ with the founding and building of the Church, emphasizing the role of the Mendicant Orders—especially the Franciscans.
Statues of luminaries of the primitive Christian Church and Franciscan saints alternate with large paintings that illustrate key episodes in the life of Christ. 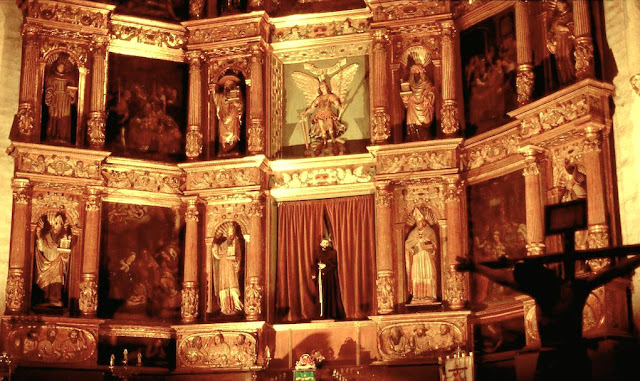 The Sculptures
On the lower tiers we are shown the four Doctors, the teachers and philosophers whose writings were the building blocks of the Latin Church. Sober and bearded, these patriarchal figures are dignified by their opulently textured estofado draperies. St. Augustine and St. Gregory, at bottom left, epitomize ecclesiastical dignity.
The middle tiers are dedicated to the founders of the monastic orders and include prominent Franciscan saints. Sumptuously attired figures of St. Bernard and St. Dominic flank the central panel of St. Francis Receiving the Stigmata, a large relief carved by Pedro de Requena at a cost of only 150 pesos, according to the original contract!
Martyrs and prophets, the conscience of Christianity, occupy the outer compartments and the top tier. These include St. Lawrence and the ascetic, San Antonio Abad. An unclothed St. Sebastian and John the Baptist, conspicuous in his wolfskin, stand apart from their elegantly attired companions. 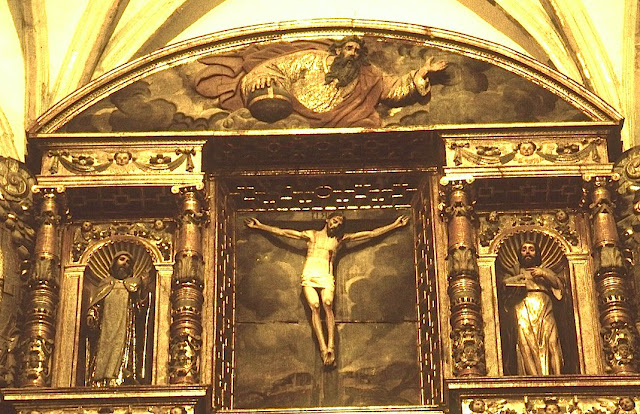 Above a large statue of Christ Crucified, flanked by saints John and Antonio Abad, God the Father, in flowing cape and beard, gestures dramatically from the crowning pediment. 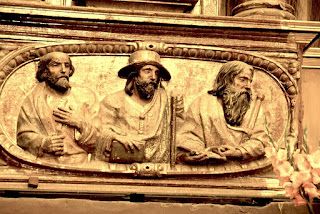 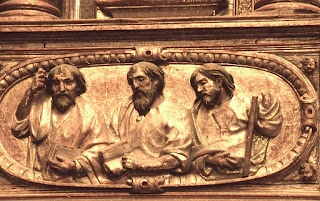 Realistic, careworn portrait busts of the Apostles, the founding fathers of early Christianity, are carved along the base panels.
The Paintings
Pereyns' paintings dramatize the significant episodes of Christ's life. Derived from Renaissance prints by the Flemish engraver Martin de Vos, the panels show a decided Mannerist influence, with a sharp eye for detail. Although the faces retain their classical serenity, the compositions display a vitality of gesture and movement that anticipates the baroque. 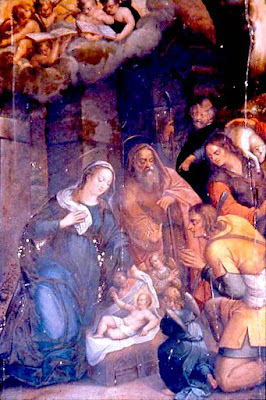 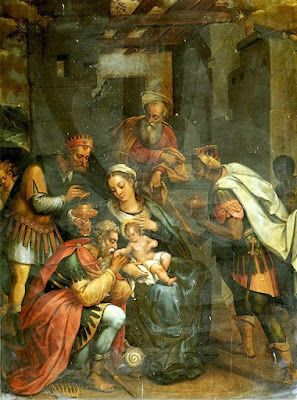 The most accomplished and accessible paintings are on the lower tier: a charming Adoration of the Shepherds (left) and the Three Kings (right).

The figure of St. Joseph is particularly well realized, as is the sensuous reclining figure of Mary Magdalene? on the base panel—the only work signed by the artist.


color images by the author, © Carolyn Brown and others
Posted by Richard Perry at 10:06 AM