The Altarpieces of Yucatán: Sotuta

Sotuta
“Swirling Waters”
Sotuta is synonymous with Nachi Cocom, the pugnacious chieftain who spearheaded the Maya resistance to the Spanish conquistadors of Yucatán.  In 1546, Nachi Cocom launched a final desperate uprising against the Spaniards and almost succeeded in driving them out. But in the face of terrible casualties, he finally accepted the inevitable and came to an accommodation with the enemy.
Baptized “Juan Cocom,” the Maya leader embraced the Christian faith and became one of Bishop Diego de Landa’s chief informants concerning Maya customs and beliefs. 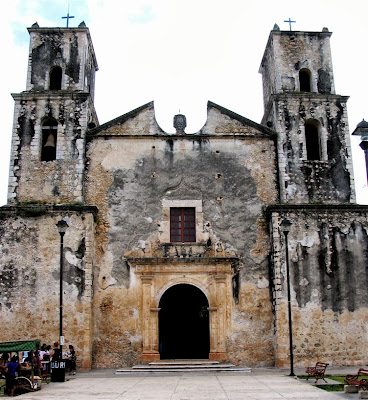 Although the old Franciscan mission was substantial, it was swallowed up by the enormous 18th century parish church.  The imposing west front is framed by multi-staged bell towers resting on broad low bases, and terminates in a broken baroque pediment, with the episcopal coat of arms cupped in its center.
(Note: like Mamá the church front has recently been painted bright yellow, losing its weathered patina)
The Altarpieces
Although no main altarpiece now remains at Sotuta, several fine old side retablos are preserved in the nave. Now largely restored, they date from 1550 to 1730 and together offer a variety of ornamental treatments within a standardized format common to other colonial altarpieces in Yucatan (at Mani and Sisal). 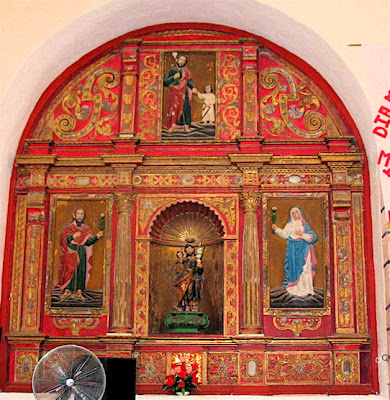 Standing against the south wall is an attractive pair, transitional in style between Renaissance and baroque. The altarpiece of the Holy Family is the plainer of the two, with decorative plasters.  Like most Yucatan retablos, it is predominantly red with gilded scrolled ornament.
Carved reliefs in folkloric style portray Mary’s parents, St. Anne and St. Joachim, and in the pediment above, St. Joseph with a youthful Jesus. A fine statue of St. Joseph occupies the niche (see below) 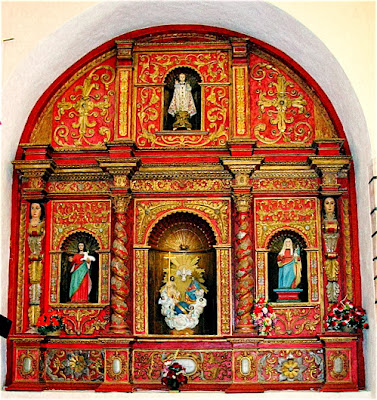 Beside it is the retablo of the Trinity—similar in color and design but more richly detailed, with twisted Solomonic columns wreathed in vines and outer pilasters with capitals in the form of human heads.  Modern statuary occupy the niches instead of reliefs. 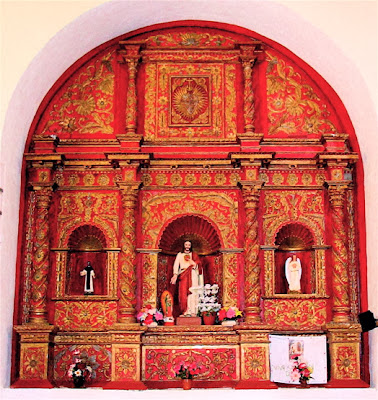 The retablo of the Sacred Heart (Santa Cruz) features spiral columns throughout with elaborate capitals, and is also painted crimson with intricate floral patterns in gold leaf. 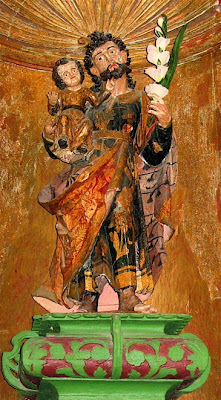 Two statues of exceptional quality stand in the nave.  Possibly the remnants from an earlier main retablo, they represent St. Joseph and St. John the Baptist. The latter is the finer work, although in poor condition as of two years ago.
Together they represent outstanding but relatively rare examples of late colonial sculpture in Yucatán.

This is the final post in our series on the altarpieces of Yucatán.  Those we have featured are selected from among many other recently restored retablos in the churches there.  For other examples see our web site.  See our map for the location of the retablos in this series.

for complete details and suggested itineraries on the colonial monasteries and churches
of Yucatán, consult our classic guidebook.
Posted by Richard Perry at 10:54 PM