The Chapels of Metztitlan; Tlacolula

Tlacolula de Tianguistengo
One of the farthest flung of Metztitlan’s visitas, Tlacolula—not to be confused with the village of the same name in Oaxaca—lies some some 60 kms to its east in the foothills of the mountainous Huasteca region. 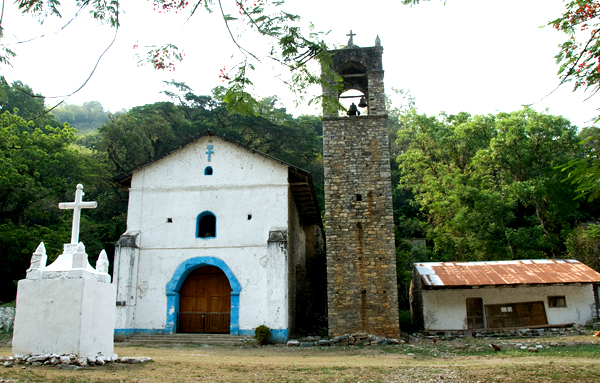 This remote village retains its early mission that, however modest, reveals several features of interest, notably its freestanding early stone bell tower—a structure more commonly associated with the missions of Michoacán.
Tlacolula retains its walled atrium with remnants of the original posa chapels and an unusual processional walkway around the perimeter formed of large, round river pebbles. 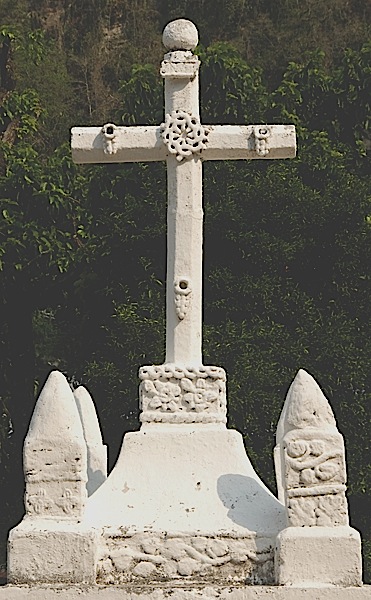 The Atrium Cross
Also still standing atop a high masonry block, the old atrium cross is closely fashioned after the one at Metztitlan, with slender octagonal arms and shaft.
The whitewashed cross is minimally adorned, with a few boldly carved reliefs: an interwoven Crown of Thorns at the apex flanked by stylized Christ's Wounds gushing drops of blood on the arms and lower shaft.
Penetrating round holes are sunk into the three Wounds, providing ample space for placing temporary or permanent objects—nails, stone inlays, pegs for floral adornment, etc.
A narrow INRI plaque stands out from the neck of the cross beneath the sole surviving cannonball finial. 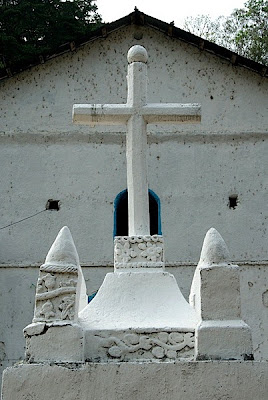 But like others in the region, perhaps the most interesting aspect of the Tlacolula cross is the base on which it stands.
The underlying pedestal is ornamented in 16th century tequitqui fashion with stylized vines and flowers. Four unmatched corner merlons surround the cross, ornamented with quatrefoil rosettes—stone carvings probably recycled from an earlier structure and similar in style to the Atzolcintla reliefs.


We accept no ads. If you enjoy our posts you may support our efforts
by acquiring our guidebooks on colonial Mexico
Posted by Richard Perry at 9:48 PM