Zoquizoquipan
Place of Mud and Clay

Bristling with merlons atop its facade, corner posas and atrium walls, the dramatic hillside church at Zoquizoquipan looms like a medieval citadel above the Barranca de Metztitlan below. 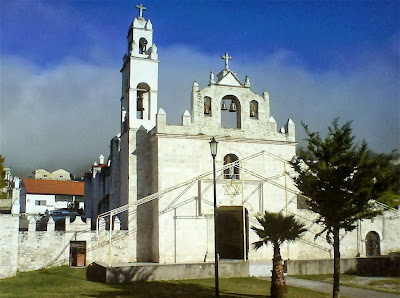 The configuration of the church front is characteristic of many in the region, set in its crenellated atrium. Also typical is the belfry or espadaña standing atop a square facade, as is the rectangular alfiz crowning the west doorway. A single bell tower—here a post colonial addition—is also a common element in local churches.

Other features of interest at Zoquizoquipan are its stone crosses. 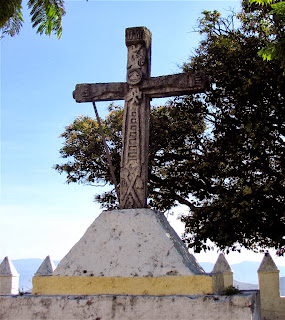 The Atrium Cross
Cut from uneven sections of squared limestone, the striking cross is mounted on a pyramidal pedestal and a cubic base embellished with corner merlons. Simply carved in bold relief, the cross departs dramatically from the regional pattern as seen at Metztitlan. Here, a variety of Passion symbols is arranged on the front of the neck and shaft, although the ordering of the imagery is unorthodox.
A miniature Tunic projects above the axis, encircled by a braided Crown. Beneath an overhanging INRI plaque at the head, a Rooster struts atop a Column slashed by a multi tailed scourge.Crossed Hammer and Pincers appear underneath the Crown. Below, a long ladder descends to a crossed Spear and Reed at the foot, surrounded by a Skull, a Hand and a Jug below. Reliefs of two roughly formed arms with unpierced hands stretch outwards along the crosspiece—an unusual depiction. 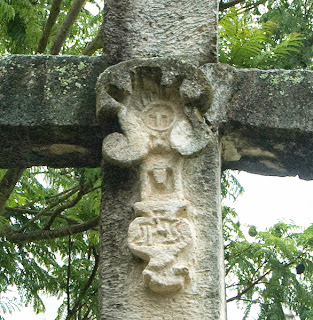 The reverse of the cross is unadorned save for an enigmatic motif that links a sunburst with a cross, framed by volutes and a serrated halo—possibly the Host—above what appears to be a Chalice inscribed with the Christic monogram IHS.
The ideosyncratic iconography of this vernacular cross suggests a date in the 17th century or later.

The Gable Cross
A smaller cross, now mounted atop the church gable, is much more in the regional style, similar to the one above the north doorway at Metztitlan. It sports a prominent knotted Crown of Thorns motif at the axis, with reliefs of outsized, dripping Wounds protruding from the arms and shaft.
A partial INRI scroll angles across the head of the cross which rests on an alfiz like pedestal with a frieze of poma reliefs.


We accept no ads. If you enjoy our posts you may support our efforts
by acquiring our guidebooks on colonial Mexico
Posted by Richard Perry at 4:22 PM