THE SILVER CHAPELS OF GUANAJUATO: La Valenciana, part one

Concerned as much with their immortal souls as with the future of Mexico, the colonial aristocracy fervently believed in pious works, principally the endowment of churches and charitable hospitals.
Among the most conspicuous of these foundations were the "silver chapels" of the mining barons erected in the hills above Guanajuato, often located beside the richest mine shafts—at Cata, at Rayas, and above all, at La Valenciana.

All of these chapels, as with much of the architecture in the colonial city, are framed in the ornate late baroque, co-called Churrigueresque, or barroco estípite style of the later 1700s. In addition, several of the architectural designs as well as the interior details and furnishings, may be influenced by or attributed to members of the prominent and innovative Ureña family of designers, who were primarily responsible for the adoption of this distinctive style across Mexico.
For the inaugural post in our new series on the "silver chapels" of Guanajuato we look at the best known and one of the most elaborate of these ornate late colonial temples: La Valenciana de San Cayetano. 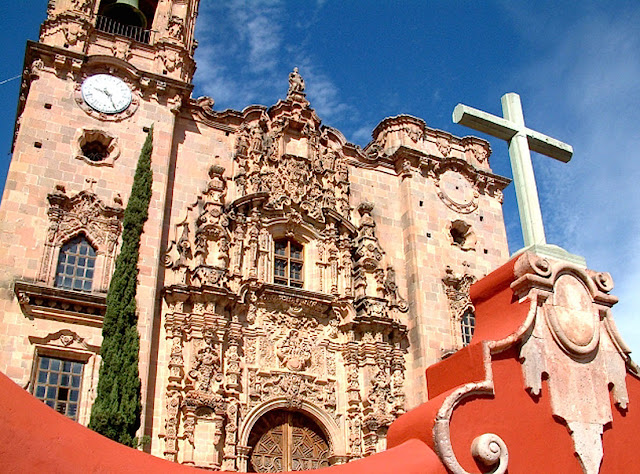 LA VALENCIANA
In 1760, after many lean years, Don Antonio Obregón finally hit la veta madre, the mother lode, at the bottom of his deep mineshaft of La Valenciana. In sudden possession of fabulous wealth, Don Antonio celebrated his new status with the purchase of an impressive title from the Spanish crown and was henceforth addressed as El Conde de Valenciana.
As a more tangible tribute to the source of his wealth and with an eye to his place in heaven as well as to the esteem of his fellow citizens, Don Antonio decided to proclaim his civic spirit by erecting an imposing church beside the mine entrance.
The sumptuous temple, dedicated to San Cayetano, a pious 16th century Italian Catholic reformer, was founded in 1765. It was completed twenty years later for the then princely sum of 360,000 pesos—part of which came from the miners, who were compelled to donate cash, in addition to their labor, for the project.
Spectacularly sited on a knoll beside the mineshaft, the church commands a panoramic view of the city and its surrounding hills. Its elevated forecourt, enclosed by battlemented walls and an ornamental wrought-iron gateway, is approached by a steep double staircase.
Commonly cited as one of the finest examples of the barroco estípite architectural style, La Valenciana reveals several hands at work over its extended construction time.
Its principal architect and the presumed designer of its exuberant facade has been acknowledged as Andrés Manuel de la Riva, but following Riva’s untimely death in 1777, a year after construction began, Francisco Bruno de Ureña was named maestro de obras and, with other Ureña family* members, including his brothers Cristóbal and Mariano, is presumed to have played a major role in its design and ornament, notably for the facades and interior design. 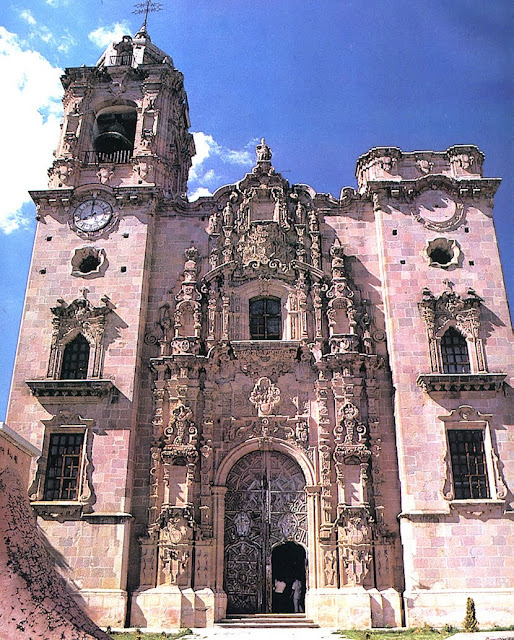 The West Facade
Recessed between twin towers, the soaring facade is expertly carved from mellow, rose-colored stone, exhibiting a quality of workmanship unequalled in Guanajuato.
The design of the west front is very much in the Ureña mold.  Derived from the innovative Ureña design for the Jesuit church of La Compañía in the city, the facade exhibits a more fluid style.
Giant, protruding niche pilasters incorporating sculpture niches extend from the ground to the upper façade, embellished with scrolls, lambrequins and layered cornices. These are flanked by slender estípites which also reach almost to the gable. 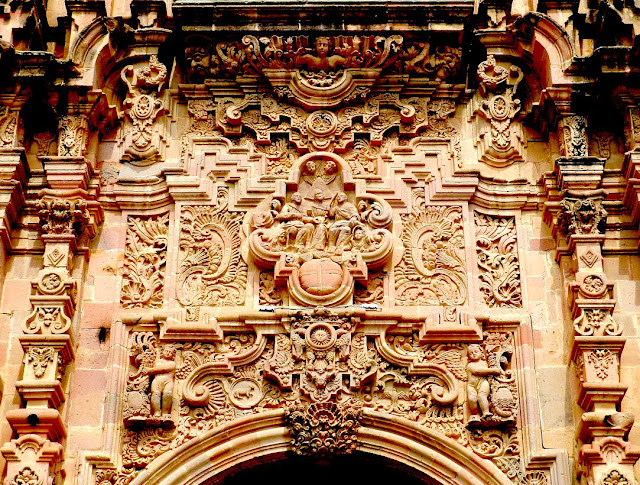 Feathery rocaille decoration and curling foliage snake sensuously around the layered cornices and numerous sculpted reliefs. And traces of paint reveal that this magnificent façade may have been originally enhanced with color. 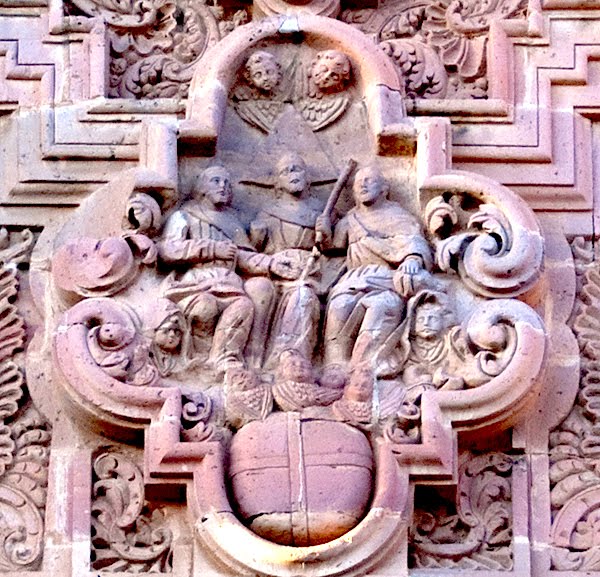 Although the statuary that once filled the main niches has gone, some of the delicate reliefs are still in place, most notably a medallion of the Holy Trinity set in an opulent moorish frame over the doorway.
Here, the Trinity is portrayed Mexican style as three bearded men in rich attire, solemnly resting their feet upon the globe. Only God the Father in the center has a nimbus, while two hooded figures—presumably portraits of El Conde and his wife—are hunched on either side. Winged angel heads appear above and below. 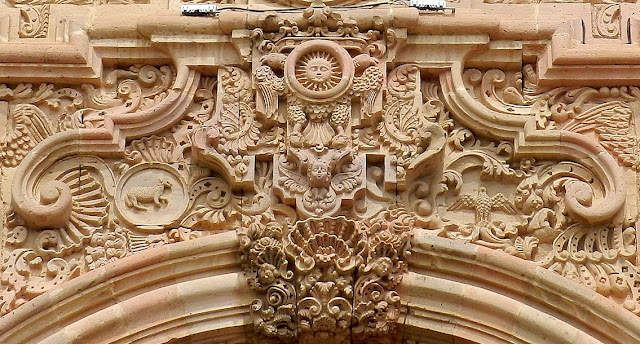 Reliefs of the sun, the lamb and the dove—the symbolic counterparts of the Trinity—are woven into the dense stone tapestry above the arch of the doorway. The sun medallion is superimposed on the two headed Imperial eagle of the Hapsburgs. 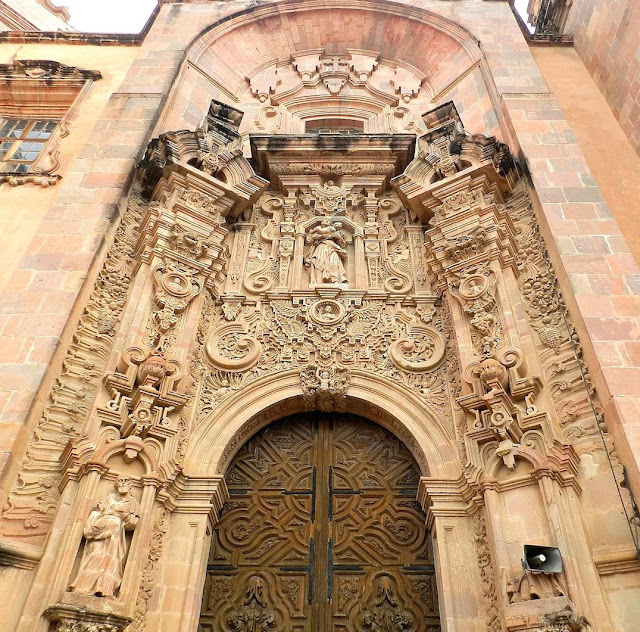 The North Doorway
Francisco Bruno de Ureña may also have designed the elegant lateral portal of La Valenciana, which is clearly related to other Ureña city facades, notably the south doorway at La Compañía and the San Diego facade. 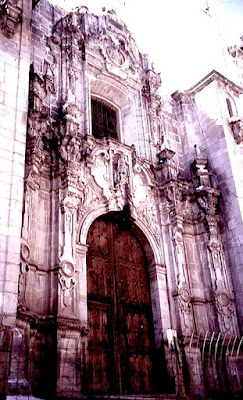 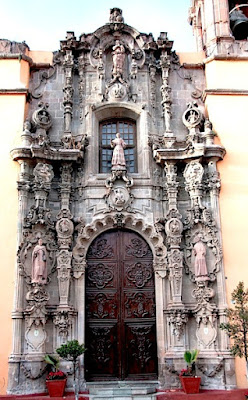 La Compañía, south doorway;                     San Diego de Alcalá, facade;
This facade exemplifies the final anástilo phase of the baroque, in which structure is almost eclipsed in favor of pure architectural decoration. Ornament has become structure.
Giant niche-pilasters, extravagantly scrolled and capped with multiple cornice fragments rise on either side of the doorway, canted forward with projecting, pedimented capitals to draw the eye inward and upward. As with the west front the sculpted ornament is especially luxurious, with fragmented cornices, complex scrolls, lambrequins and “winged circle” reliefs—a signature Ureña motif.

For our next post we consider the church interior and its altarpieces.
*Known as El maestro transhumante, the "peripatetic master", Felipe de Ureña was the most influential of the Mexican born architect /designers to introduce and expand the Churrigueresque style into New Spain. During the second half of the 18th century, together with family members, he was primarily responsible for the spread and subsequent evolution of this ornate late baroque style into cities across Mexico, especially along the silver routes north of Mexico City.

Primarily an innovative designer and fabricator of altarpieces, he later adapted the barroco estípite style as it was called, for church facades. His elegant and distinctive designs are recognized and known as the felipense style.
text © 2017 Richard D. Perry
color images by the author, Niccolò Brooker and José Ignacio Lanzagorta
Posted by Richard Perry at 1:54 PM