As planned, this is the first of a series of posts on the picturesque church of San Gerónimo Tlacochahuaya, among the most lavishly decorated of the churches in the Valley of Oaxaca.

Nestled in rolling countryside only 20 kms from downtown Oaxaca, Tlacochahuaya was nevertheless quite remote in early colonial times. In 1558, Fray Jordán de Santa Catalina, a Dominican ascetic, chose this spot as a retreat for prayer and meditation, dedicating it to St. Jerome, the patron saint of hermits and penitents.
In the late 17th and early 18th centuries the spartan 16th century ermita was transformed into a substantial monastery to also serve the nearby Zapotec communities. 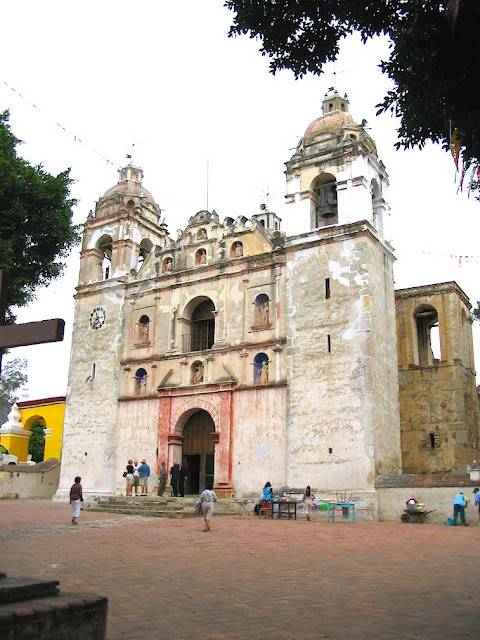 We first look at the facade. As noted, the church is the outstanding example of folk baroque architecture and decoration in the region. Massive towers support squat belfries adorned with fluted pilasters, undulating pediments and high tiled cupolas sprouting feathery wrought-iron crosses.
Despite its imposing scale, the salmon colored stucco front retains a folk-like quality, with plain scrolls, uneven cornices and simple half columns. And faded patches of blue and red paint reveal that the facade was formerly boldly accented in bright colors, which it would be a delight to identify and restore. 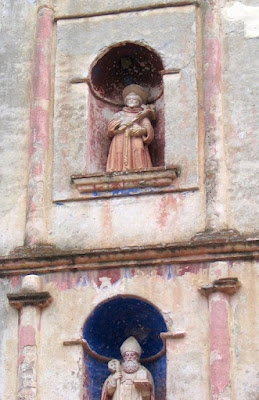 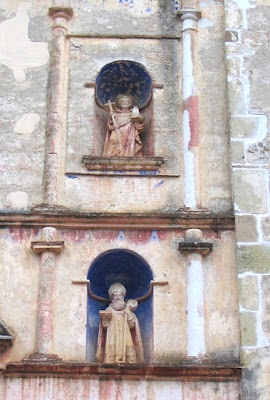 Fortunately most of original stone statues remain in place. These include Saints Dominic, Thomas Aquinas, Augustine and Francis, along with The Virgin Mary. God the father and archangels occupy the gable niches. 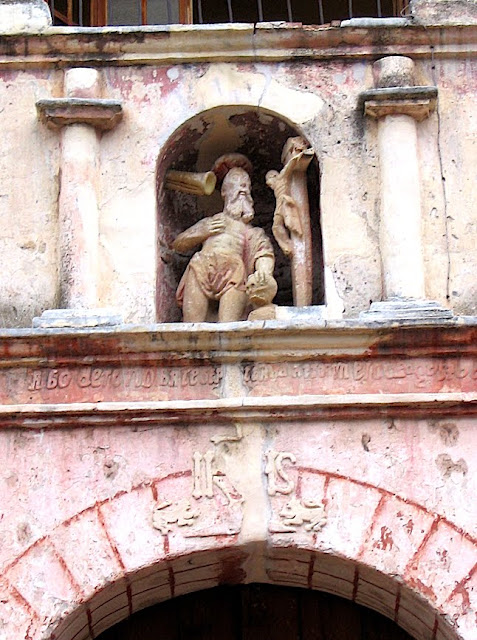 Most conspicuous is the figure of the patron St Jerome in the niche above the doorway. He kneels in penance before the crucifix, one hand clutching a rock and the other resting on a skull. The bearded saint strains hear the word of God emanating from the horn beside his left ear.
text & images © 2007 & 2020 Richard D. Perry
Posted by Richard Perry at 12:38 PM