Continuing our review of colonial buildings of distinction in the city of Puebla, we turn to the architectural complex of La Concordia. The review is divided into two posts.
“La Concordia” as it is known, is made up of the church, the priestly house: the Casa de Ejercicios, and an annex known as the “Patio de los Azulejos” — which we cover in our second post.
The complex began life in the mid 1500s with the founding of a charity hospital run by the Brotherhood of the Holy Cross (Santa Cruz) to serve the indigenous residents of the area.
A century later the old hospital, its temple and precincts were transferred to the Oratorian Order, founded by San Felipe Neri. 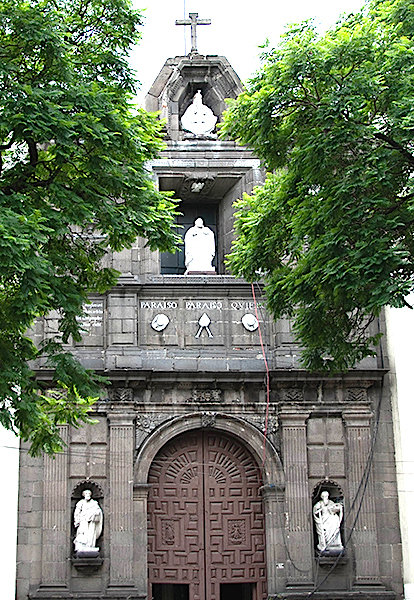 A new church was built to a design by local architect Carlos Garcia Durango, (also responsible for the city church of San Cristóbal.) Erected during the 1670s, the church is built from dark gray basalt, fashioned in soberly classical poblano style.
The facade of the church is topped by a cross that recalls its original dedication to Santa Cruz.
In front of the choir window is the image of Saint Philip Neri on which a dove was placed, symbol of the Holy Spirit. Under the window you can read the words “PARADISE, PARADISE, I WANT”, words allegedly uttered by the founder shortly before his death. 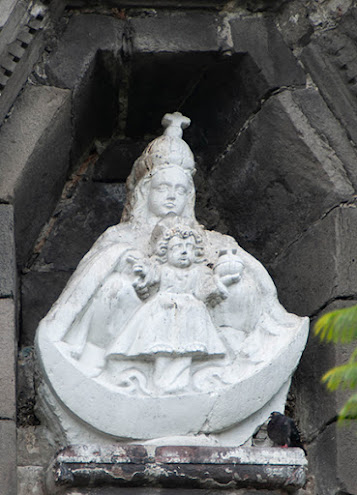 Above rests the alabaster statue of Our Lady of Vallicela, the rarely portrayed patron of the first church in Rome belonging to the Congregation of the Oratory, founded in 1575 by Saint Philip Neri. 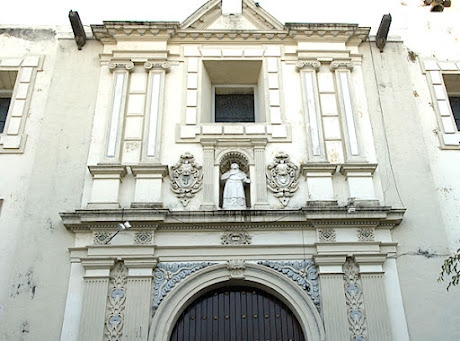 Another statue of the saint stands in a niche of the neoclassical side entry.
The interior of the church houses neoclassical altars and a set of viceregal paintings by noted poblano artist Miguel Jerónimo Zendejas, illustrating passages from the life of San Felipe Neri.
text © 2022 Richard D. Perry
images courtesy of Niccolo Brooker and from online sources.
Posted by Richard Perry at 1:26 PM