The Murals of Tepetlaoxtoc: The Convento

As we noted in our earlier post, Tepetlaoxtoc was founded in 1527 as a mission, hermitage and retreat center by Fray Domingo de Betanzos, the father of the Dominican Order in Mexico.
In this second post we look at a partial sequence of extraordinary murals in what remains of the lower cloister of the old convento.
The patio is lined along the two surviving sides by early frescoes of a highly distinctive character: painted in largely monochromatic grisaille with blue and red accents.
One special feature of the corridor murals, which illustrate the Passion of Christ, is that they are linked in sequence, within circular painted frames of serpentine foliage—an unusual format recalling the cloister at Malinalco. 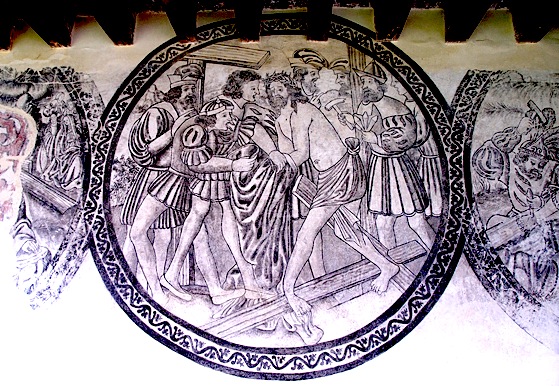 Although the cycle is incomplete, the surviving frescoes have recently been restored and depict key scenes from the Via Crucis: including the Crucifixion, the Deposition, the Lamentation or Calvary, the Ascension, and Jesus appearing to Mary Magdalene and St Thomas. 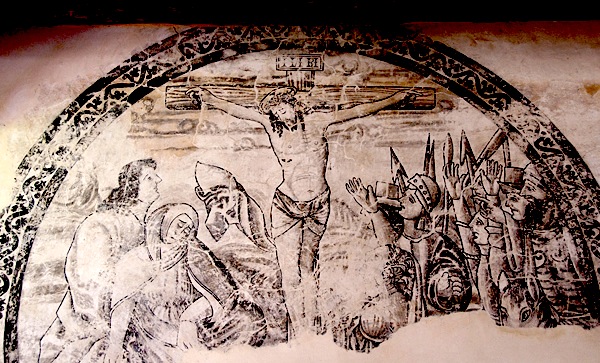 Mary Magdalene appears prominently in several of the scenes.  She was a favorite of Fray Domingo and was adopted as the patron saint of the mission to commemorate its founding on her feast day, July 22nd. 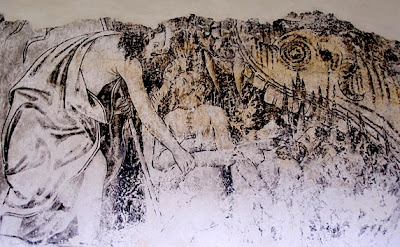 Other scenes include a graphic Harrowing of Hell


Portraits of saints once decorated the cloister pillars, of which only those of Thomas Aquinas and, in a rare appearance, St. Elmo—of the nautical phenomenon St Elmo's Fire and the patron of seamen—here holding a caravel, now survive.