The Murals of Tepetlaoxtoc: The Hermitage

Tepetlaoxtoc was the first Dominican mission of importance in Mexico, founded in 1527.
It was also used as a hermitage and retreat as well as an evangelical center, and ultimately became a shrine to Fray Domingo de Betanzos, the mission founder and father of the Dominican Order in Mexico, who resided here.

The Murals
Among the special attractions at Tepetlaoxtoc are its recently restored early murals. These are found in two intimate cloisters within the complex: of the hermitage and in the convento.  We look first at the extraordinary mural in the little cloister of the Hermitage. 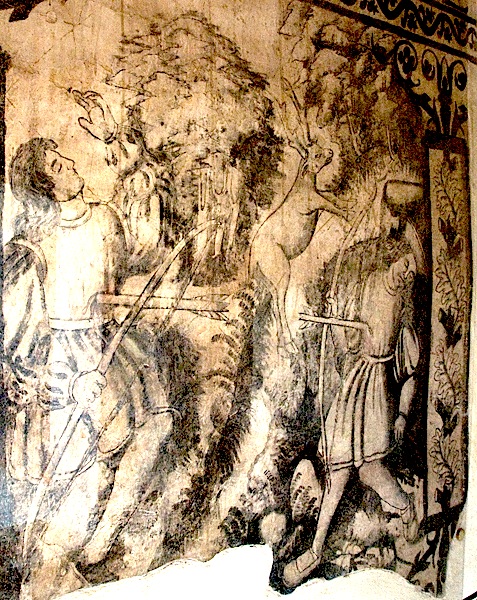 The Hermitage
The hermitage murals are fragmentary but the surviving passages are very unusual. They depict a  woodland hunting scene with two hunters transfixed by arrows and separated by a rampant stag.
Both hunters are in fact specific saints as confirmed by their iconography: the saint on the left is St. Eustace, a Roman general who saw a vision of Christ when hunting a stag. He was converted to Christianity and later met a martyr's death (roasted live inside an ox according to legend!)
His companion is St. Hubert, another early Christian saint and avid hunter, who shares some of Eustace's iconography and is often associated or even conflated with him as a patron of hunters.
An image of Christ on the cross usually appears between the deer's antlers, but is not shown in this version.
The connection of this rare scene with Fray Betanzos is unclear, but to our knowledge this is a unique portrayal of these saints in early Mexican mural painting.