The Carved Crosses of Hidalgo: Huichapan

Of those regions of Mexico richest in colonial monuments and artifacts, the state of Hidalgo, north of Mexico City, boasts perhaps the largest and most varied group of sculpted stone crosses, all of them carved by indigenous craftsmen.
Among these, one style stands out, that of cylindrical crosses carved with the Arma Christi—objects associated with the Passion of Christ.
In this and subsequent posts we look at the premier examples of the genre in the region, starting with the more complex and finely sculpted crosses and continuing with less sophisticated but imaginative rural versions.
We begin with examination of two crosses at Huichapan: the magnificent atrium cross and its simpler, rooftop cousin. 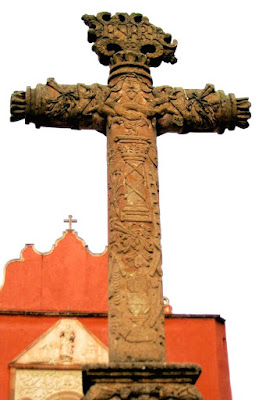 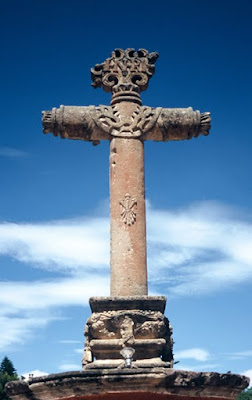 In the mid-16th century a Franciscan mission was founded here. Although the main church was rebuilt in the 1600s, it retained its original carved doorway.
The complex is enclosed by a spacious atrium or churchyard, whose chief attraction is its 16th century stone cross—the best known and most richly worked of the Hidalgo atrium crosses.
Stylistically linked to the famous crosses of Guadalupe and Atzacoalco in the Valley of Mexico, it influenced several other nearby crosses which we will look at in future posts.
The tall, cylindrical cross stands in front of the main church of San Mateo, set high on pedestal busy with carved angels—a later addition. The arms and shaft are delicately encircled by a profusion of Passion symbols, densely packed on every surface and finely detailed in high relief. 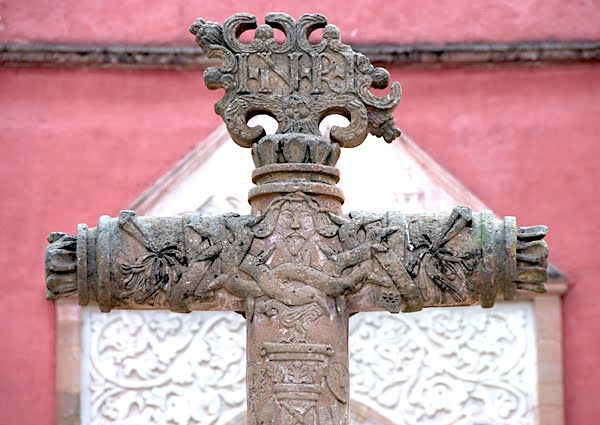 On the front a diminutive head of Christ at the crossing, with flowing locks and Colonel Sanders style beard, is framed by two Crowns of Thorns, one woven around the forehead and the other, larger one, entwined around the crossing. This second Crown overlays narrow strips wrapped around the arms on either side, probably representing priest's stoles.
Beyond these, stylized, flamboyant streaming Wounds are impaled with fearsome spikes at an angle.
A rooster hunkers atop a festooned Column that extends down the shaft, and below, a third Wound projects in the same convoluted style.

A Chalice with an inscribed, circular Host emerging from it occupies the foot of the cross. Other symbols including silver coins and the hand of Judas crowd the shaft on either side, with reliefs of the sun and moon. The grand crowning INRI plaque, although damaged, is ornately scrolled and carved with winged cherubs. 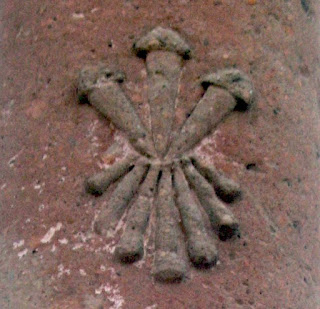 The reverse of the cross is plain apart from the Crown of Thorns around the neck and another, less ornate, Wound with three spikes on the shaft. 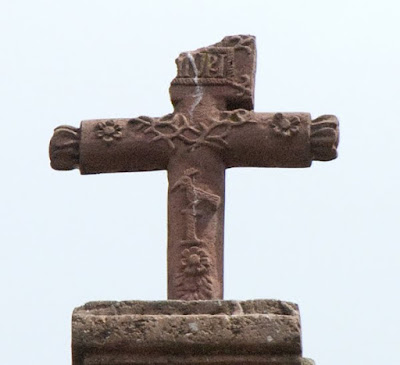 A second cross, carved in a similar but much simplified style, stands atop the adjacent chapel of the Third Order.