El Cardonal is an old mining town nestled in the foothills of the Sierra de Pachuca east of Ixmiquilpan, a popular area shrine noted for its imposing church of La Purísima Concepción, and its carved stone atrium cross.
The Atrium Cross
Mounted inside an impressive domed structure topped by statues of ecclesiastical figures, the atrium cross faces the church.  Still in fairly pristine condition beneath its protective shelter, the cross was reputed to have been crafted by Otomí craftsmen in the 16th century, although it looks later and may be a partial reconstruction. 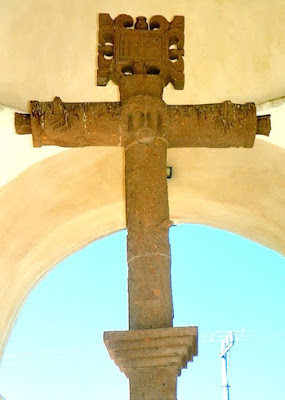 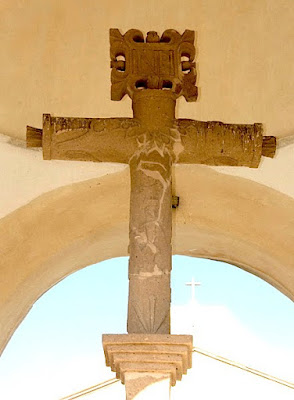 El Cardonal.   atrium cross: front;   reverse.
Fashioned from soft, roseate sandstone, the cylindrical cross is carved in the round with classic Passion symbols in low relief.  As with others in area, a worn, spiny Crown of Thorns is loosely draped around the neck. 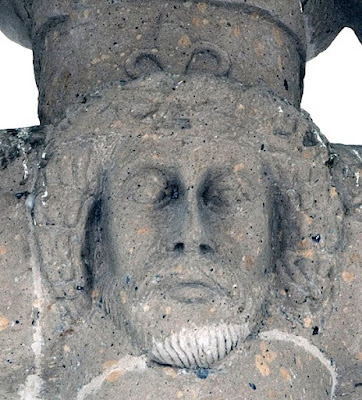 In the front, a sensitively modeled Face of Christ at the crossing is framed by flowing locks of hair and flanked by spidery Wounds with large angled Spikes on the outer arms. A third Wound on the shaft is sandwiched between Christ’s tunic and an elegant Chalice with associated Host. 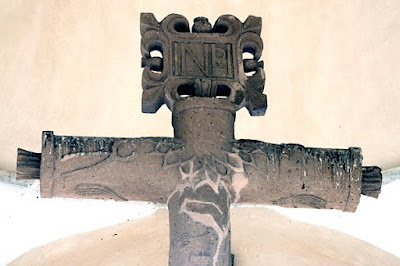 Passion objects on the reverse side include the spiny necklace and the Rooster atop a long, slender Column on the shaft. The typically bescrolled surmounting plaque is inscribed INRI on both sides.