In an earlier post we looked at the crosses of Actopan, one of the great Augustinian priories, located in central Hidalgo.  Here we review several crosses in smaller villages in the vicinity of Actopan, starting with that at San Jerónimo. 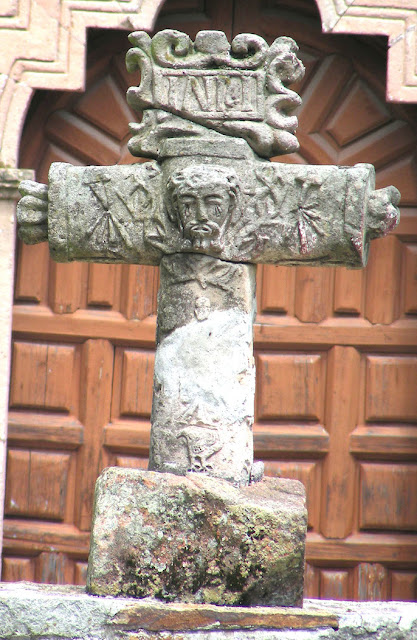 This former visita of Actopan possesses a humble atrium cross fashioned in the regional cylindrical style.

The downcast Face of Christ at the axis sheds relief tears, carefully carved into the visage—an unusual and affecting touch.
In addition to the worn Crown of Thorns above the Face, a much weathered, necklace style Crown is draped around the crossing.
Three Wounds, each pierced by huge Spikes and spurting gouts of gore, complement the agonized visage of Christ. 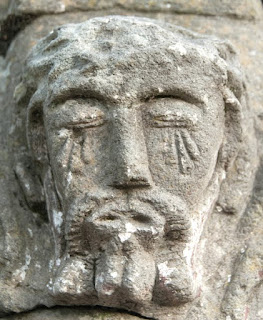 Because of its diminutive size and obvious history of wear, tear and reassemblage—the lower part of the shaft has gone—the cross bears few Passion symbols; Sun and Moon reliefs project under the arms, while a vestigial Cockerel at the foot once perched on a now missing Column. Fragmentary reliefs of other Instruments appear on the sides.
Eroded, foliar finials terminate either arm and a riven INRI scroll in the ornate area manner heads the cross.