The church at Santiago Anaya, founded in 1546, is located some 20 kms north of Actopan. Formerly known by its Aztec name of Tlachichilco (Red Rock Country), the town was renamed Santiago Anaya after General Pedro María Anaya, a ex-president of Mexico, born in Huichapan. 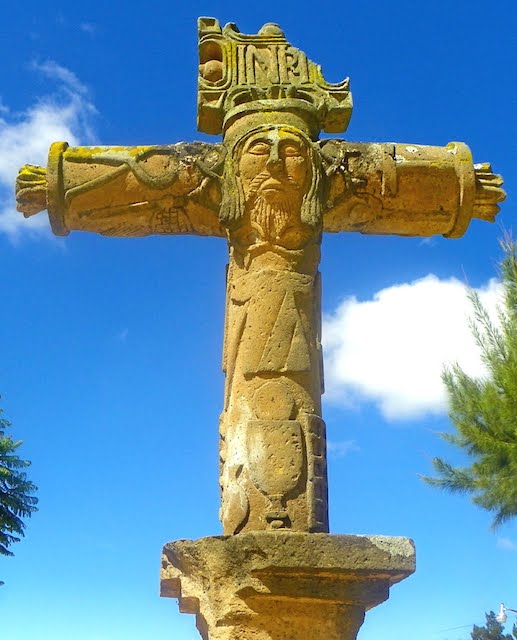 The Atrium Cross
Mounted high on a classical plinth in the large atrium opposite the church, this compact cross is densely carved with Passion reliefs in the style of Tlahuelilpa.
Featuring a stubby, cylindrical shaft and arms with virtually no neck, it is typical of many in the immediate area, including El Cardonal as well as nearby La Magdalena and San Jerónimo.
The front of the cross, facing the church door, prominently features a bearded Face of Christ flanked by reliefs of elongated Hammer and Tongs along the arms.
A loosely woven “necklace” style Crown in low relief encircles the neck, but strangely there are no Wounds displayed on this cross.  An ample Tunic above a Chalice shaped like a wine glass with an emerging Host almost fill the shaft below the Face. 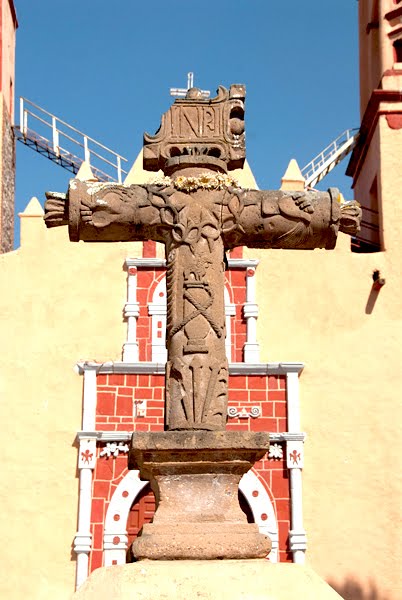 Numerous Passion objects appear on the reverse. Two Hands stretch out along the arms: one like a fist grips a Scourge with metal tips, the other in a thumbs-down position clutches what appears to be a hank of hair, although it may be a Purse.
Above a fan of three large spikes, a Rooster sits atop a rope swagged Column; a Ladder and Corn plant stretch down on one side, a row of silver coins down the other.
Bud-like petaled finials sprout from the arms and a battered but ornate INRI plaque caps the head of the cross.