The parish church of the apostles Peter and Paul, also known as El Carmen, towers dramatically above this mining town in eastern Michoacán, bordering the State of Mexico.
Founded in the 16th century, the hastily built first church here lasted almost two hundred years, until the mid-1700s, when another local silver strike financed its replacement by a splendid new church which, when completed, was one of the most celebrated and grandiose baroque temples in Mexico.
The story goes that famed silver baron Don José de la Borda offered to underwrite the new structure, but when pressed by the cautious townspeople to put his offer in writing, took offense and left the area, moving to Taxco where he financed the even more ornate church of Santa Prisca. 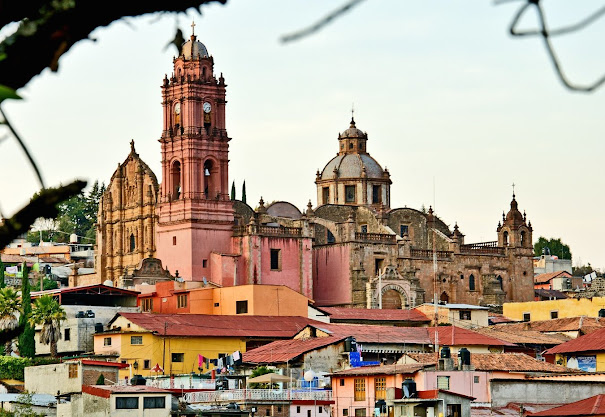 Built of mellow sandstone, the imposing church of Sts Pedro & Pablo occupies a commanding site that overlooks the town and is visible from its every corner. The church is girded by chapels and annexes, and faces a long, elevated atrium with high walls, ornate gateways and a fearsome serrated cross. 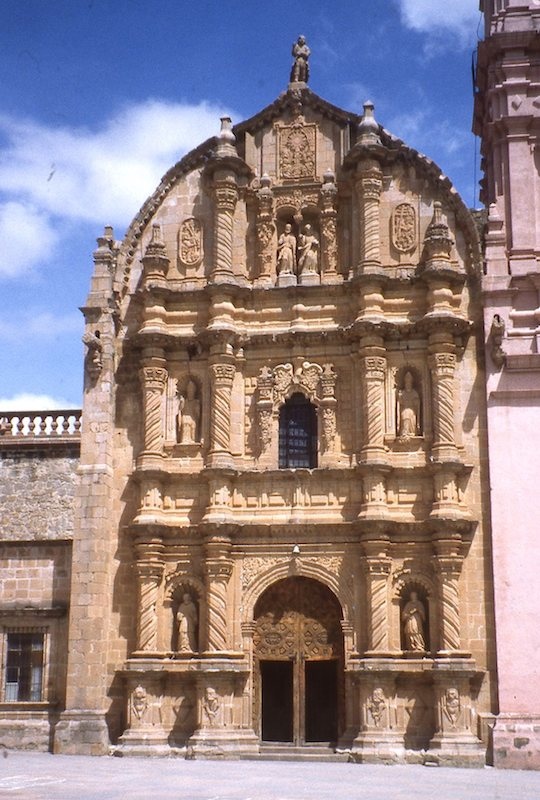 The West Front
Strikingly similar to the monastic church front of San Agustín in Querétaro, the eye-catching neostyle facade is thought to be the work of the same architect, Juan Manuel de Villagómez.
Its inven ive sculptural detail is contained within an idiosyncratic framework that harks back to the retablo facades of the 17th century. Although the figure sculpture is more conventional than that of San Agustín, the Tlalpujahua facade seems more dramatic, energized by its provincial vigor, bold surface textures and insistent neo-mudéjar geometry.
Jutting octagonal columns are slashed by opposing spirals, headed by swagged capitals, and crowned by minaret-like pinnacles. Above the polygonal door way, complex estípites, richly ornamented with herms and animal masks, frame the Moorish choir window and extend upwards to flank the double sculpture niche in the upper facade. A cornucopia of geometrical and foliated reliefs fills the other intervening surfaces.
The facade iconography explicitly glorifies the power of the Catholic church and the supremacy of the 18th century ecclesiastical hierarchy. Statues of country priests and mitered bishops, carved in a naive, frontal style, occupy ornamental shell niches on the lower and middle tiers. 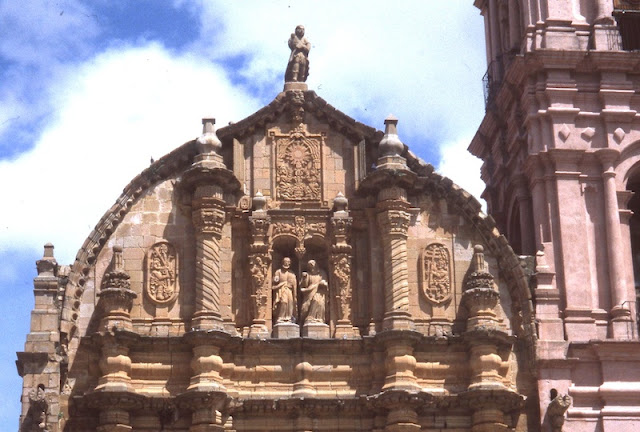 The quality of the stone carving improves markedly in the upper facade, focusing on the unusual double niche. Here, the twin figures of St. Peter and St. Paul—the apostolic founders of the church—appear in flowing robes, accompanied by reliefs of Saints Joachim and Anne. 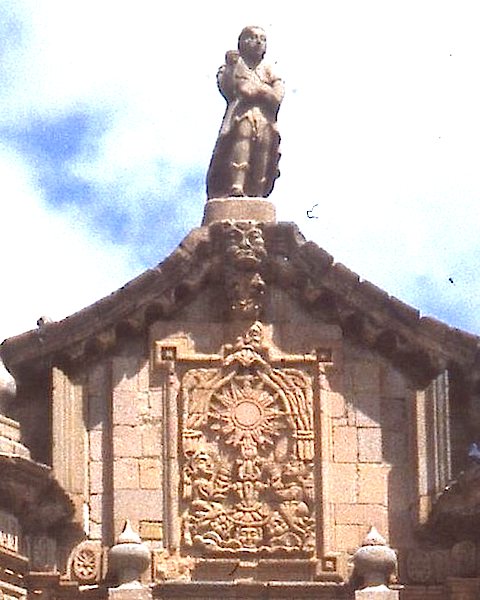 In the bas-relief overhead, intricately wrought in a bold popular style, angels adore the Holy Sacrament and, in the lozenge-shaped medallions, they display the pontifical cross and keys of St. Peter. Atop the spectacular gable, curved in the shape of the papal tiara, is silhouetted a statue of the Archangel Raphael—the messenger of God and bringer of divine healing—outfitted in traditional buskins and cutaway skirt, and clutching his fish. 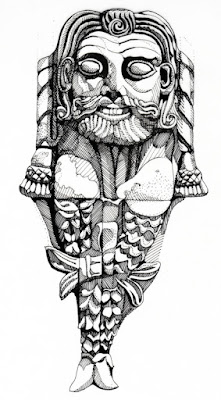 Note too the sirens and bearded tritons with fishtails and scales grimacing from the column pedestals at the base of the facade. Together with other mask reliefs on the facade, these images are thought to signify the sins and vices of the world, destined to be vanquished through the power of the established church and its members. 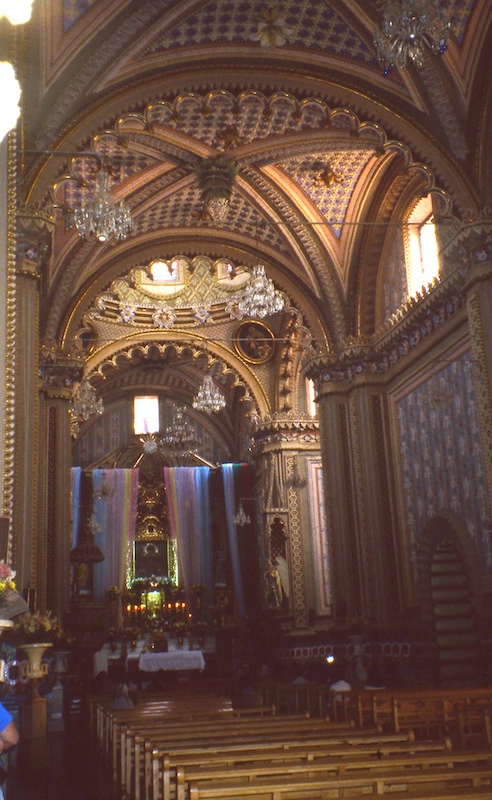 Inside the Church
Wholly remodeled in the early 1900s, the church interior is a florid fantasy in polychrome tile and stucco, created in the same eclectic style as the nave of San Diego in Morelia and by the same designer, Joaquín Orta. Every surface is studded with rosettes and fleur-de-lis reliefs, punctuated by lobed portals and Moorish arches dripping with extravagant neo-Gothic ornament.
Few of the original church furnishings remain. One by one during the 19th century, reflecting changing fashions, all of the church’s magnificent baroque altarpieces were dismantled. One or two paintings from these retablos have survived, however. On view in the sacristy is an unusual triptych of Christ’s Passion, rendered in somber style by the famous baroque painter Nicolás Rodríguez Juárez. In a side chapel hangs a spirited canvas, portraying the Virgin of Light, by Juárez' even more prominent contemporary Miguel Cabrera.
Another early colonial survival is the monolithic baptismal font, possibly belonging to the primitive church on this site, splendidly carved with angel heads around its rim. The remodeled Chapel of the Passion, frescoed in a colorful, popular style, is an attraction of more recent vintage. 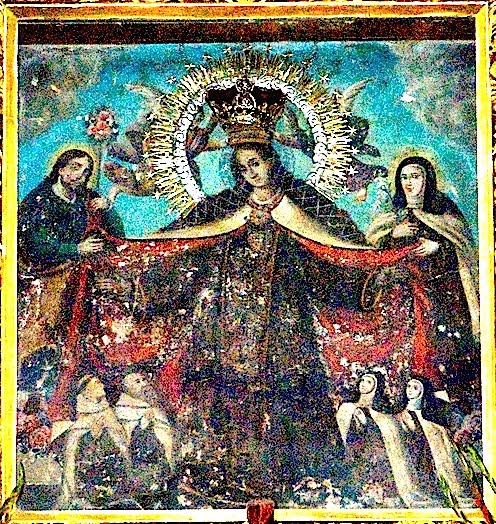 Pilgrims come from afar to venerate the image of Our Lady of Carmen which adorns the main altar. Miraculously surviving the destruction by a devastating mudslide of the barrio chapel in which it was formerly lodged, this charming late colonial icon portrays the Virgin as Protectress of the Carmelites. Bowing her head beneath a weighty gold and silver halo and crown, she shelters nuns and friars of the order beneath her ample red mantle, which is lifted reverently at the corners by St. Joseph and the Spanish mystic St. Teresa of Avila.
See our earlier post on Tlalpujahua

Posted by Richard Perry at 1:59 PM