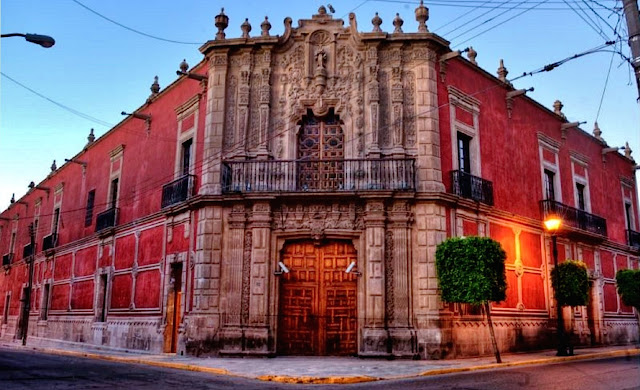 The magnificent sculpted entry fronts the cut off corner of the building—an architectural feature sometimes called puerta chata, after a similarly fronted mid-1700s building, La Casa Chata in Tlalpan, Mexico City.
The facade is densely detailed in late baroque style especially on the upper level, with neo Moorish openings, estipite pilasters and carved rococo panels.
The current exhibit at the Palacio, which will be of interest to our readers, showcases photography of earlyMexican colonial churches by the author/architect Beverley Spears.

text © 2020 Richard D. Perry
images from online sources
see our other posts on Durango: The Basilica Menor;
Posted by Richard Perry at 8:57 AM