Following their arrival in Zacatecas in 1574, the Jesuits founded a temple and school there under the patronage of a Spanish official, El Maestre de Campo, don Vicente Zaldívar y Mendoza, whose arms can be seen on the left wall of the sanctuary. 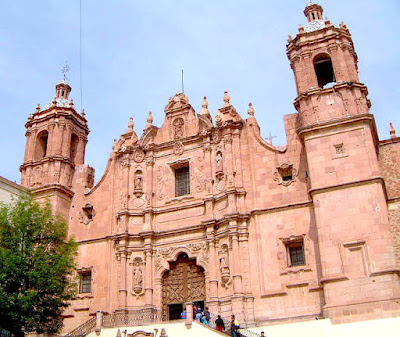 The present church, originally known as La Compañía, was built starting in 1746 and completed three years later, being dedicated in 1750. Raised on a narrow platform overlooking its own plaza, the hillside church boasts a traditional 17th century retablo-façade of finely cut stone in the sober Jesuit baroque style, with plain massed columns.

With the expulsion of the Jesuits from Mexico in 1767, the church was occupied by the Dominicans, who rededicated it to their founder and patron St. Dominic (Santo Domingo) 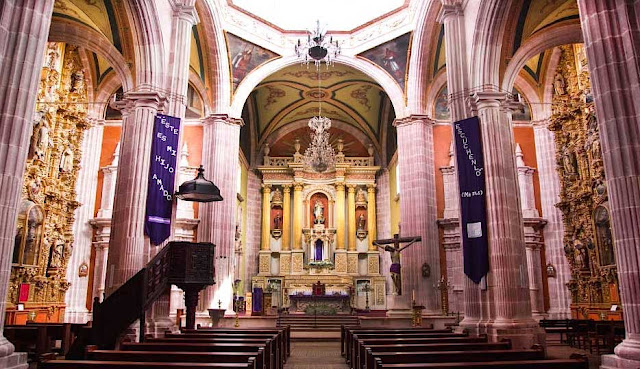 The Retablos
Today the glory of Santo Domingo lies in its superlative baroque altarpieces. Although the main retablo was unfortunately replaced by a dull neoclassical altar in the 19th century, eight of the original retablos survive in excellent and virtually original condition.
Designed and fabricated between 1747 and 1753 to conform to an iconographical program designed by the Jesuit Father Calderón, all are the collaborative work of designer Felipe de Ureña and his son-in-law Juan García de Castañeda.*
All were underwritten, as in Aguascalientes, by the wealthy Basque Manuel Colón y Larreategui who even provided much of the construction materials. 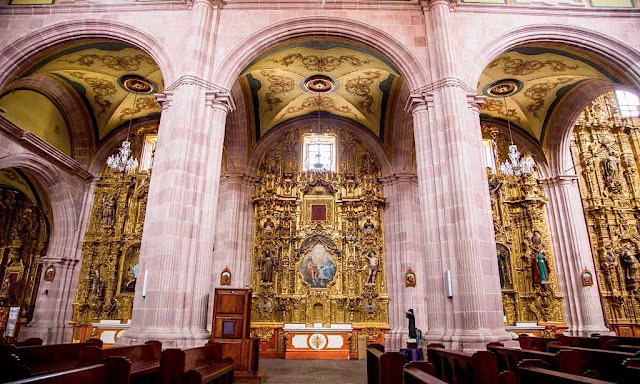 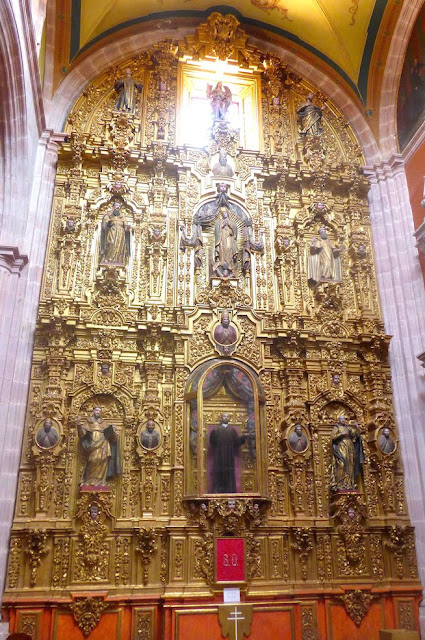 Retablo of St. Ignatius Loyola
Twinned with that of St. Francis Xavier opposite, this transept altarpiece is the grandest and most ornate of the Ureña retablos in Santo Domingo. Expansive estípites inset with polychrome medallions on the lower level enclose broad pilasters with foliage encrusted niches and panels.
In a manner reminiscent of the flatter, more ornamental Queretaran style, the subtle, multi-layering of the elements gives the retablo a dynamic, shifting surface texture while emphasizing the upward movement, characteristic of so many Ureña designs. 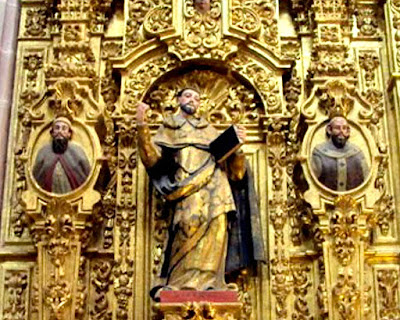 As expected, St Ignatius occupies the center position, although the figure of the Virgin of Guadalupe in the heavily curtained niche above may be a later addition. Statues of the founders of the other religious orders—St Francis, St Dominic, St Augustine and St Peter Nolasco—fill the remaining niches. The Retablo of St Francis Xavier 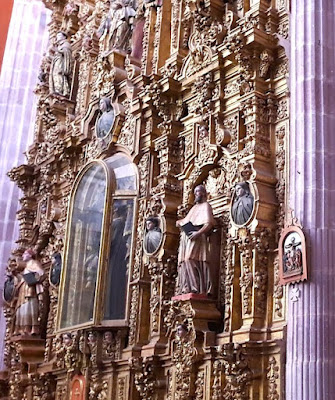 An ecumenical array of saints fill the outer niches, with Franciscans and Augustinians, but the diminutive figure of St Francis Xavier himself survives, now silhouetted against an upper window—a theatrical device, as we have seen, much favored by the Ureñas. 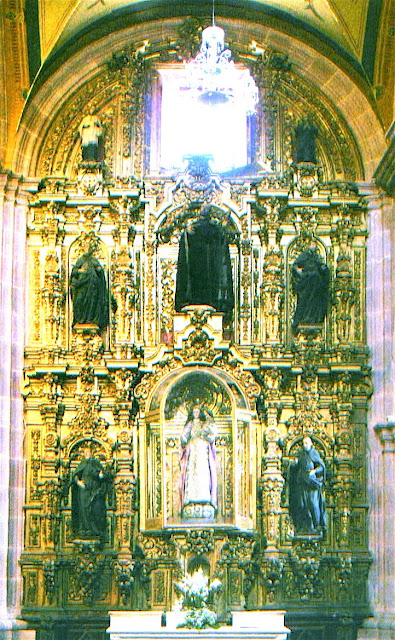 Retablo of St Francis Borgia
Honoring the third Jesuit luminary, this ornate altarpiece, together with that of the Virgin of Light, is one of another closely related duo that face each other across the nave. Sumptuous paired estípites flank the interestípites on either side that are almost wholly given over to elegantly framed sculpture niches replete with floral relief decoration.
St. Francis Borgia stands in the upper center panel above a vitrine enclosing an image of the Virgin of the Rosary—a Dominican addition—surrounded by black robed Jesuit saints in the lateral niches.
* Known as El maestro transhumante, the "peripatetic master", Felipe de Ureña was the most influential of the Mexican born architect /designers to introduce and expand the Churrigueresque or barroco estípite style into New Spain. During the second half of the 18th century, together with family members, he was primarily responsible for the spread and subsequent evolution of this ornate late baroque style into cities across Mexico, especially along the silver routes north of Mexico City.
Primarily an innovative designer and fabricator of altarpieces, he later adapted the barroco estípite style as it was called, for church facades and interiors. His elegant and distinctive designs are recognized as the  "felipense" style.