As we noted in our previous post, the Santo Domingo retablos together constitute the largest and finest collection of Ureña altarpieces * in Mexico.

In addition to the major retablos dedicated to Jesuit notables we described in our first post, the four remaining original altarpieces come in facing pairs along the nave: these comprise those of The Trinity and the Virgin of Light, and two dedicated to San José and El Rosario. 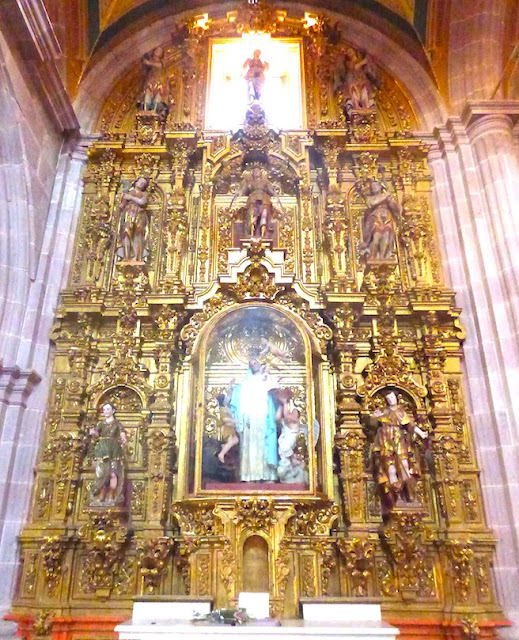 Retablo of the Virgin of Light
The retablo of La Luz is almost identical to the Francis Borgia altarpiece, except that the interestípites are slightly less prominent. Although richly ornamented and gilded, the estípites lack the oval cameos of the Loyola and Xavier retablos, although they are no less refined for that;  the center pavilion is broader too. 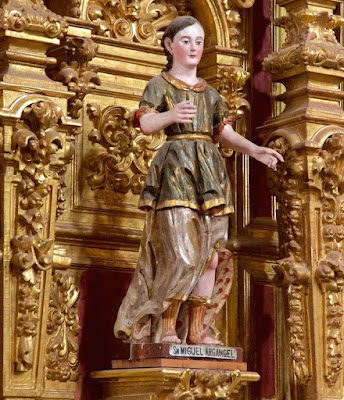 In the center calle, a tableau of the Virgin of Light, conventionally posed with her classic attributes, occupies the glassed in centerpiece, accompanied by the seven archangels in the surrounding niches. 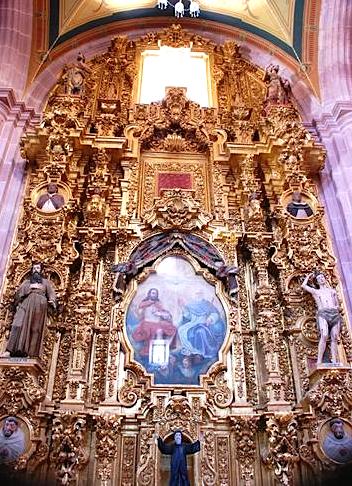 Retablo of the Trinity
Here, massive niche-pilasters anchor the altarpiece on each side instead of estípites, housing statuary as well as relief busts of the Fathers of the Latin Church that fill the medallions above and below the statues.
In a departure from the other Santo Domingo altarpieces, which feature only statuary, the broad center pavilion here accommodates a large painting of the Holy Trinity in an oval, moorish inspired frame. 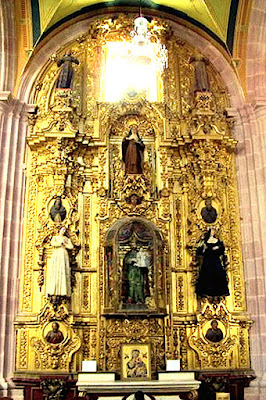 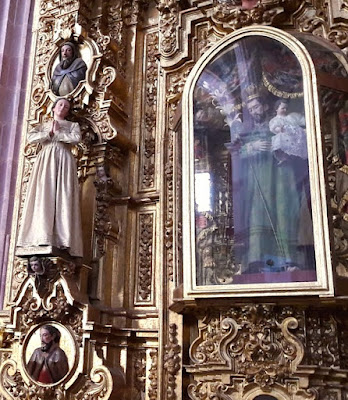 retablo of San José
Retablos of San José and El Rosario
Two other paired retablos in Santo Domingo are the smaller but gemlike and virtually identical retablos of San José and El Rosario. Both recently restored, they feature large open centers framed by densely layered and boldly projecting niche-pilasters, faced with outsized scrollwork and inset with rounded relief medallions. No estípites appear in either altarpiece, possibly also reflecting the influence of the anástilo fashion.
The San Jose retablo showcases statues of four female saints, including St. Teresa of Avila, while the Rosario altarpiece features the figure of the Virgin of Dolores in the center vitrine below a crucifix representing the Christ of the Good Death.

* Known as El maestro transhumante, the "peripatetic master", Felipe de Ureña was the most influential of the Mexican born architect /designers to introduce and expand the Churrigueresque or barroco estípite style into New Spain. During the second half of the 18th century, together with family members, he was primarily responsible for the spread and subsequent evolution of this ornate late baroque style into cities across Mexico, especially along the silver routes north of Mexico City. Primarily an innovative designer and fabricator of altarpieces, he later adapted the barroco estípite style as it was called, for church facades. His elegant and distinctive designs are recognized as the "felipense" style.