The Monastery of San Gabriel Cholula is the grandest Franciscan monastery in the Puebla region. The most striking part of the monastic complex is the former open chapel, or Capilla Real.

La Capilla Real
Travelers who have seen the famous mosque in Córdoba, Spain, may experience a sense of deja vu on entering the Capilla Real. The broad Renaissance facade, surmounted by classical cupolas, hardly prepares the visitor for the surprising interior, aptly named the "Hall of a Hundred Columns."
This elaborate structure was the Indian chapel. It is the oldest part of the monastery and may occupy the former inner shrine of Quetzalcoatl's temple, explaining its special sanctity for the native community, which commissioned its construction and paid for its maintenance throughout the colonial era. As designed by its Spanish architect, Luis de Arciniega, the chapel had no less than nine aisles side by side, each divided into seven bays by colonnades of octagonal and round shafts—creating a dense forest of columns.

Originally, the bays were roofed with brick vaults and wooden artesonado ceilings similar to those at Córdoba. These were replaced in the 18th century by the tiled and lanterned domes we see today. During the same period, the long arcaded west front, formerly open to the atrium, was enclosed and fitted with classical portals.
The spectacular flanking turrets have gone, and apart from the domes, only a few candelabra finials still project above the facade to remind us of its original dramatic outline.
The recently restored interior houses numerous colonial paintings and statues, but the most striking artifact is the huge baptismal font, densely carved with acanthus foliage and a knotted cord rim. 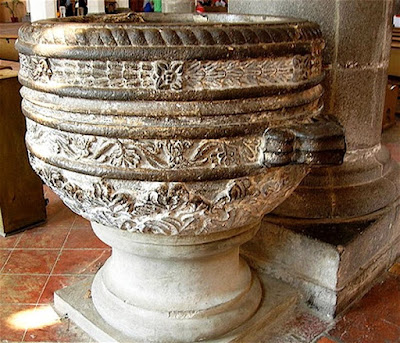 Although it may lack the rich Moorish detailing of its Andalusian ancestor, the Capilla Real of Cholula is nevertheless one of the most ambitious examples of colonial architecture in the Americas.


text © 1997 & 2020 Richard D. Perry
photography by the author and courtesy of Niccolo Brooker, Carolyn Brown and Felipe Falcón
for posts on the paintings and frescoes of San Gabriel, please visit our sister site: mexicosmurals.blogspot.com

Posted by Richard Perry at 1:43 PM