From the ashes: Santa Maria Acapulco

For our first post on outlying colonial monuments of special interest we go to the remote Sierra Gorda Potosina. 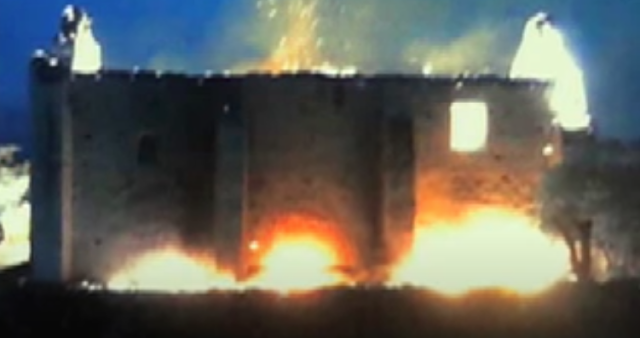 Within minutes the traditional wood and thatch roof, of a size unique in Mexico, was in flames, spreading to the nave of the church and its many retablos, a grievous loss to the villagers and the legacy of colonial art.
Founded around 1740, the temple is a former Franciscan mission. After the fire only the walls were left standing, with mural painting, and only a few sculptures and two paintings were rescued from the total of 125 pieces that had already been cataloged by the institute (INAH), including sculptures from the 17th and 18th centuries.
The church front was also damaged, affecting the adobe sculptures and passages of mural painting.

An existing INAH conservation and documentation program already under way assumed greater urgency. A full restoration project was launched to repair and as far as possible restore as much of the fabric and furnishings as possible.
The walls were strengthened and a new wood and thatch roof fashioned after the original manner.
The original 18th century altarpieces and pulpit were destroyed, but to date only the Retablo of Guadalupe has been replaced. 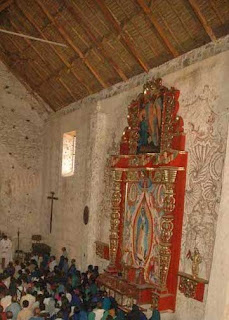 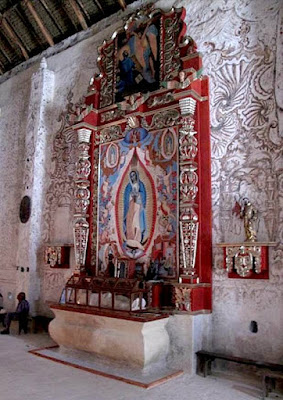 The  new Guadalupe retablo
Although the abundant wall murals were also damaged by the fire, many have been repainted with the participation of the Pame villagers. 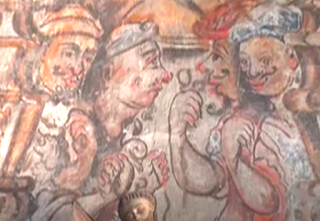 mural fragments before and after
The partial restoration of this unique church and its treasures is heartening to the sorrowing villagers as well as lovers of Mexican colonial art and architecture.