Set beside the San Juan river, in colonial times the provincial town of Lagos de Moreno in the Los Altos region of northeastern Jalisco prospered as a way station on the rich silver route to Zacatecas. The town was known as the "Athens of the Bajio" for its fine mansions and cultural pretensions.
The town is also home to one of the most spectacular late baroque churches in Mexico, another building attributed to Francisco Bruno de Ureña, a prominent member of the illustrious and ubiquitous Ureña family of architects and retablistas and the preeminent architect of the Bajío region. 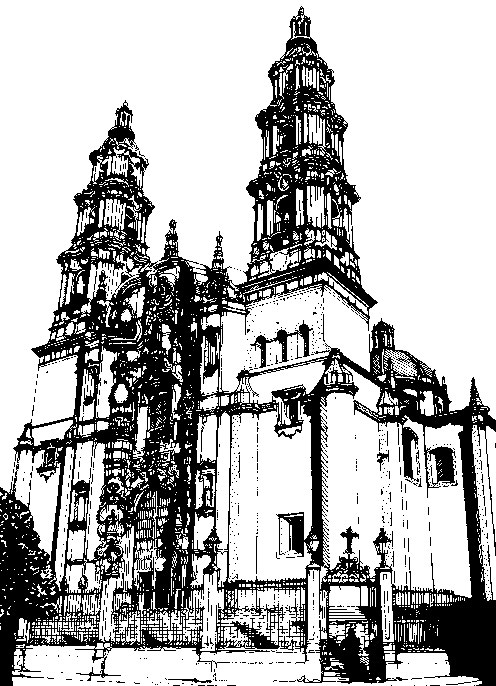 The "Cathedral"
The grand parish church of The Assumption, known to residents simply as the "Cathedral," was built in the late 1700s to house the shrine of San Hermion (Hermes?), an obscure early Christian martyr whose purported relics were brought here from Rome. Set on a rise, the site of a former mission, and reputedly, a pre-hispanic temple before that, the Cathedral dominates the main plaza, its soaring twin towers visible for miles from the surrounding plain.(pic)
Designed c.1765 by Francisco Bruno, the church is an inventive and flamboyant example of the terminal Mexican baroque, harmoniously conceived and richly detailed both inside and out in accordance with the "total design" canon in the felipense tradition.
The elongated, concave facade is richly encrusted with ornate architectural sculpture, replete with statuary, decorative niches and rococo flourishes - all delicately fashioned from pink marble. Sharply angled niche-pilasters with freestanding statuary frame the grotto-like front, recalling Francisco Bruno's facade of San Diego de Alcalá (Guanajuato) The neo-moorish openings - doorway, window, sculpture niches - diminish as they rise, accentuating the dynamic verticality of this design, which is crowned by an sinuously scrolled gable (pic) in the felipense style.

The lateral doorways are in the same vein, and even more decorative, featuring elaborately framed busts of popular saints like St. Barbara and John the Baptist. Note too the ornate sacristy doorway on the south side, surmounted by a complex relief in popular style praising the Holy Trinity (pic). 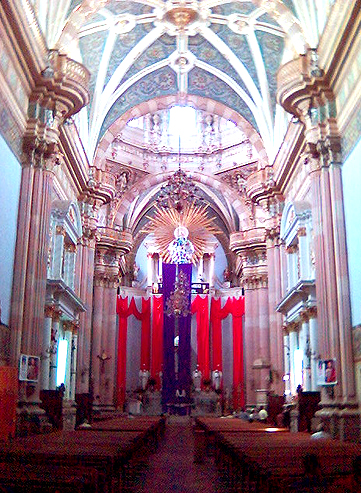 The interior is also a sumptuous and eclectic feast. The nave is prominently divided by clustered pilasters and projecting running cornices with corbel-like drum capitals. Rounded sausage-like arches, with torus moldings richly incised with zig-zag decoration, frame the bays which are covered by ribbed vaults that borrow from Gothic traditions as well as Serliesque classicism (pic). 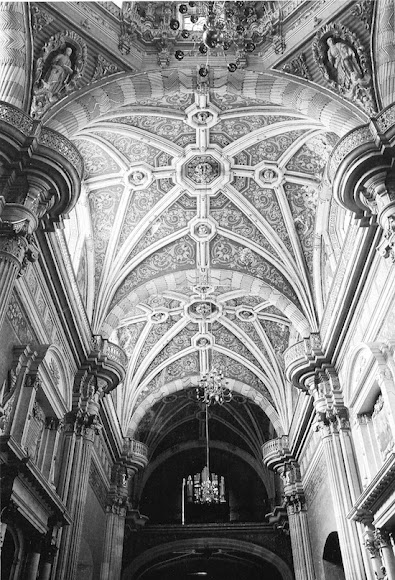 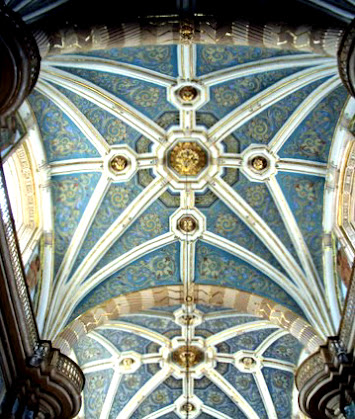 Although more richly detailed, the interior also recalls San Diego de Alcalá (Guanajuato) as well as Felipe de Ureña's interior of the church of La Guadalupe in Aguascalientes.
Unfortunately the predominantly banal neoclassic cut of the many altars strike a jarring note—making the viewer regret the loss or non completion of the splendid gilded altarpieces that were surely once planned for the church.

The cathedral was dedicated in 1790 and the towers were the last elements to be added c. 1795.
Each tower rises like a wedding cake, its diminishing tiers encrusted with massed columns and projecting cornices - an early statement of the emerging "neostyle" fashion and contemporary with the almost identical towers at nearby San Juan de Los Lagos. (see)
For some, the cathedral at Lagos de Moreno may present the very picture of late baroque excess, but to the open-minded viewer, it has great charm and undeniable charisma - an outstanding Spanish architectural monument of the ornamental terminal baroque, so soon to be swept away by the puritanical tsunami of neoclassicism.
text, graphics and B/W images © 1997 & 2020 Richard D. Perry
Posted by Richard Perry at 12:59 PM