As followers of this blog know, we often feature works by the eminent baroque architect and designer Felipe de Ureña* and his family.
In this post we look at the contributions by at least two of the family members to El Santuario, a famous pilgrimage church in the town of San Juan de los Lagos in the Los Altos region of Jalisco.
Here Felipe, together with his son-in-law Juan García de Castañeda, designed and fabricated the sumptuous main altarpiece, now sadly lost, for the celebrated basilica of the miracle working image of Our Lady of San Juan.
Architecturally, the rebuilt basilica, or Santuario as it is known, is somewhat eclectic although it may broadly be termed “neostyle", a terminal phase of the Mexican baroque that heralds and transitions into neoclassicism.
Begun in the 1750s and attributed to the metropolitan architect Juan Rodríguez de Estrada, it was unfinished at his death in 1769, and was only completed and finally dedicated in the 1790s.
Noting then, that the towers—customarily the last building phase of any church front—display a strong affinity to Francisco Bruno’s almost contemporary towers at nearby Lagos de Moreno, and given the earlier connection of the Santuario with Felipe and Juan Garcia de Castañeda, it is probable that Felipe's son Francisco Bruno de Ureña may have had a role in their final design and completion.

Towers: San Juan de Los Lagos (l)            - Lagos de Moreno (r)  © Richard Perry
The Lost Altarpiece
On April 8th 1758, Juan García de Castañeda signed a contract for the design, creation and assembly of a sumptuous main altarpiece for the newly completed basilica to house the image of the Virgin of San Juan de Los Lagos—a major commission that would mark the high point and the ultimate work of his artistic career.
Working out of his Aguascalientes workshop, in conjunction with Felipe de Ureña, Castañeda produced a detailed design, that unlike the retablo itself, has fortunately survived in the diocesan archives. 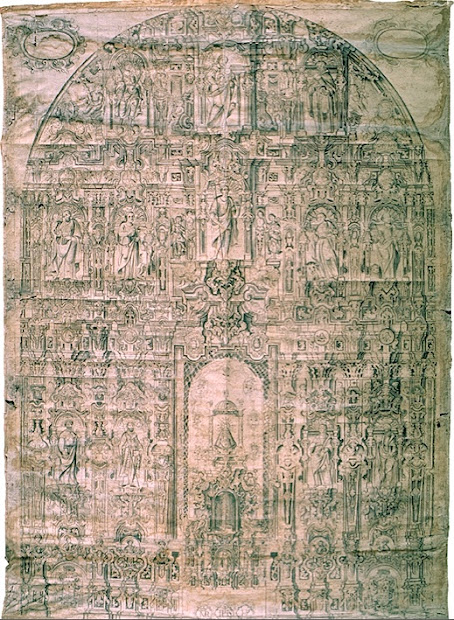 The design, with its iconography, was approved and work went forward. The structural members and carved ornament were preformed at the Ureña Aguascalientes workshop and transported to the site of the still unfinished Basilica. Then, in 1763, five years after the project was initiated and the altarpiece well along in construction, Castaneda suddenly died.

At that point Felipe de Ureña contracted to finish the retablo, and it is thought that he completed the task two years later in 1765 before he left for Oaxaca the next year.  (As it turned out, this magnificent altarpiece was not installed in the Basilica until 1769, four years later.

Based on the preserved Castañeda design, the altarpiece, although grand in scale and sumptuous in ornament, was structurally relatively conventional in the classic late baroque estipite style popularized by the Ureñas and others in the Bajio region. 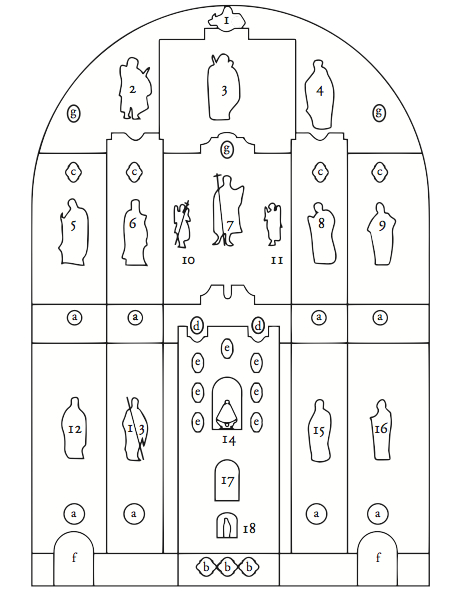 The retablo is divided into four horizontal tiers with five vertical calles. Narrow estípite pilasters incorporating relief medallions frame the more expansive interestípites, or niche-pilasters in the lower tiers. All the niches contain statues of saints—12 in all including those in the more prominent center spaces.

In the felipense tradition, the central pavilion of the retablo is wider, especially in the grand main tier, designed for more effective display of the principal image of Our Lady of San Juan and the patron John the Baptist above. (for details of the iconography see the key below) 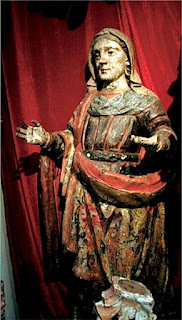 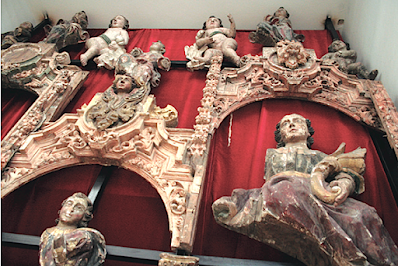 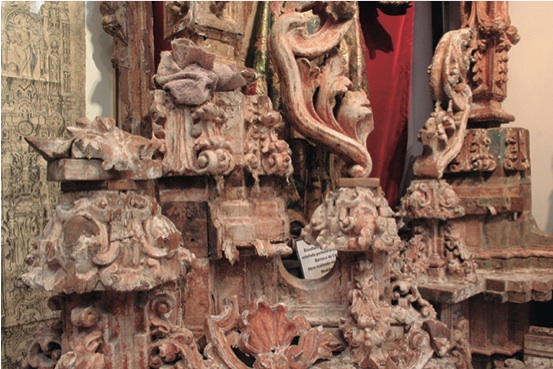 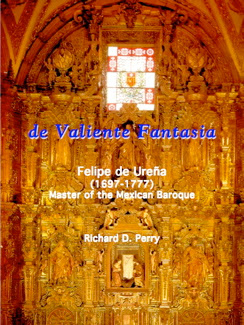