Mexico. the Crosses of Tulpetlac

This is the first of two posts on the stone sculptures of Tulpetlac, in Mexico State (edomex)
Once an important Aztec center, Tulpetlac (Place of Tule Mats) was later closely associated with San Juan Diego and the apparitions of the Virgin of Guadalupe. 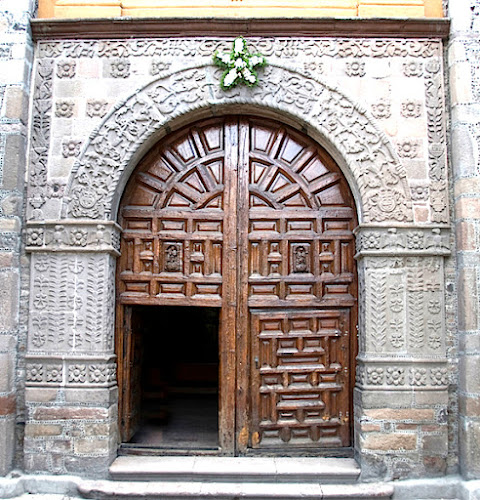 Although the church has been altered since the 1500s and is now jointly dedicated to Santa Maria and El Cristo Rey, much of the original Franciscan ornament survives, most prominently the doorway with its carved eagles, serpents and rosettes.

archaic relief of the Virgin above doorway
But one of the chief glories of Tulpetlac is the group of finely carved, quite ornate crosses found within its precincts.
Three closely related crosses stand atop the atrium walls and gateway: 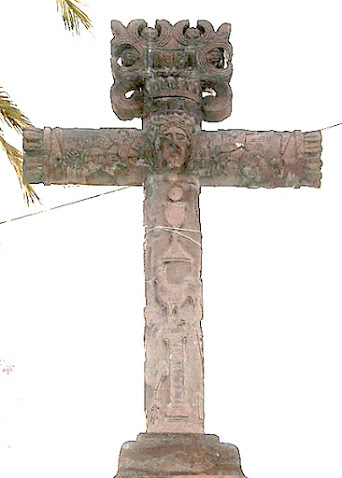 El Pilar Cross
This exceptional cross now stands above one corner of the NW atrium wall. Sometimes known as El Pilar, it is strikingly similar to that at nearby Tultepec, reminiscent in its detail of the classic sculpted crosses of Guadalupe and Atzacoalco.
Cylindrical arms and shaft display a full complement of Passion reliefs carved in the round rather than in a flat, tequitqui style. A delicately sculpted Face projects from the crossing ringed by a spiny Crown around the neck.
Prominent Sun and Moon reliefs decorate the arms along with slender, pierced Wounds. Stars appear on the reverse of the arms. 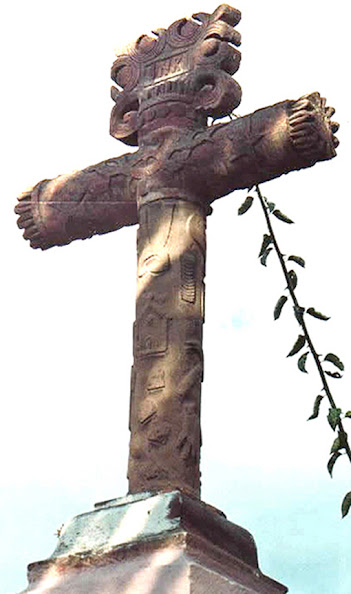 As at Guadalupe, star-shaped floral finials cap the arms and the cross is headed by a bescrolled INRI plaque inset with angels’ heads. The abbreviated petals on the finials of all three crosses strongly resemble cacao beans—perhaps a prehispanic survival. 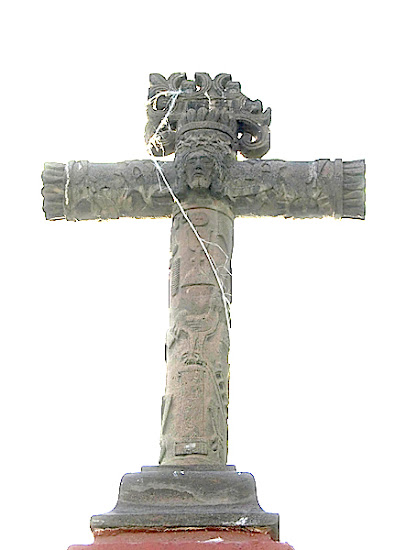 Cross #2
A second cross stands atop a section of the wall to the southwest. Sparely carved, with more widely spaced reliefs, this cross may be the model for its sister cross. It also boasts a sculpted Face at the crossing and a prominent “soft” Crown encircling the neck. 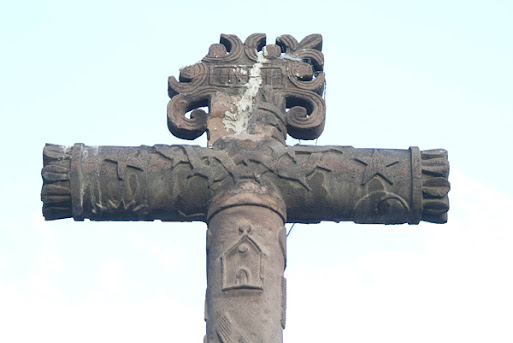 As with El Pilar, Sun and Moon reliefs on the arms are complemented by Stars on the reverse. 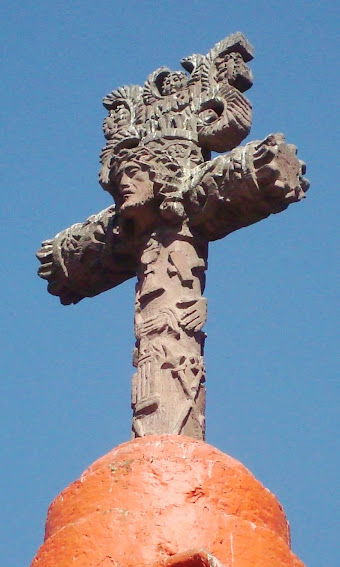 The Gateway Cross
The third, smallest, and most decorative of the crosses is perched atop the brightly painted atrium gateway. Reputedly a replica of an earlier cross in the same location, like the others it features a panoply of In- struments carved in high relief.
An exceptionally prominent Face of a youthful looking Christ, fully modeled in the round with chiseled features and wreathed by wavy hair, puts the adjacent soft Crown and Wounds in the shade.
The oversized INRI plaque atop the cross is extravagantly framed by feathery scrolls with cherubs.
text ©2022 Richard D. Perry
photography © Niccolo Brooker
Posted by Richard Perry at 12:59 PM