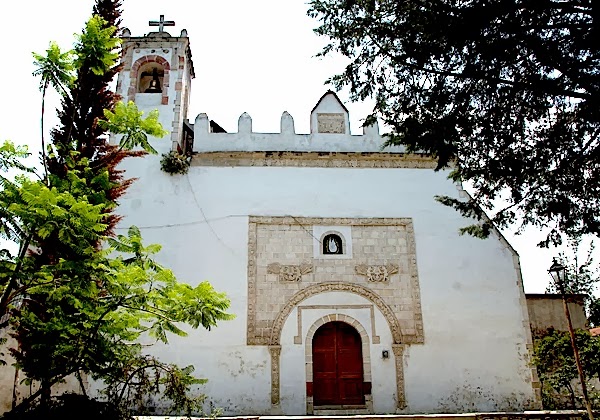 Formerly a visita of Metztitlan and now a dependency of nearby Metzquititlan, the little church of San Nicolás Atecoxco is one of the most delightful of the regional churches, distinguished by its fine architectural detail and prolific stone carving.

To the simple open chapel, dating from the mid 1500s, a broad, shallow nave with a classic rectangular front in the regional style was added, probably early in the following century. 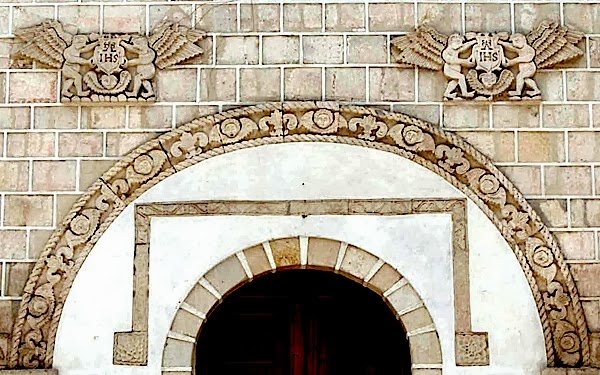 Winged angel heads and fleurs de lis alternate around the grand archway of the original entry, which is set on jambs carved with twisting foliage that terminates in pomegranates on the capitals. 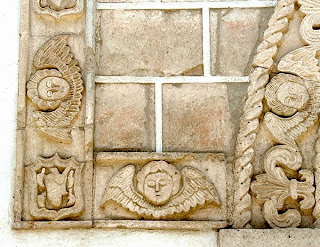 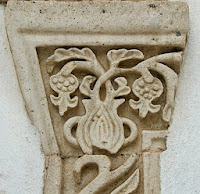 A great square alfiz above the doorway is again ornamented with winged angel heads, this time mixed with Augustinian escutcheons. It also encloses a pair of tequitqui style reliefs of the Christic monogram IHS held by more angels with elaborate, spread wings.
The plain inner doorway—a later addition—is also surmounted by a carved alfiz of undulating vines and complex rosettes.

A decorative frieze runs below the crenellated parapet of the church, also carved with winged angels displaying the Augustinian emblem of the pierced heart.

On the center battlement, another remarkable relief displays robed angels with raised, fan like wings displaying an escutcheon invoking the Holy Spirit. The presence of eleven heads inside the escudo suggests a reference to Pentecost, although the portrayal of the Habsburg Imperial insignia instead of or in place of the dove of the holy Spirit is strange. 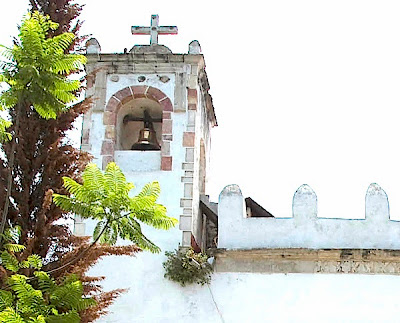 An unusual third alfiz adorns the bell opening just below its upper cornice of the tower. Composed of fluted moldings, it encloses a trio of relief rosettes. A good sized cross in the Metztitlan style caps the tower.

The original sanctuary arch of the open chapel remains in place inside the church, carved much like the exterior archway and surmounted by part of an early mural of the Last Supper—one of the few fragments to survive of this formerly painted chapel, perhaps once adorned like its celebrated neighbor at Xoxoteco.


We accept no ads. If you enjoy our posts you may support our efforts
by acquiring our guidebooks on colonial Mexico.
Posted by Richard Perry at 4:19 PM