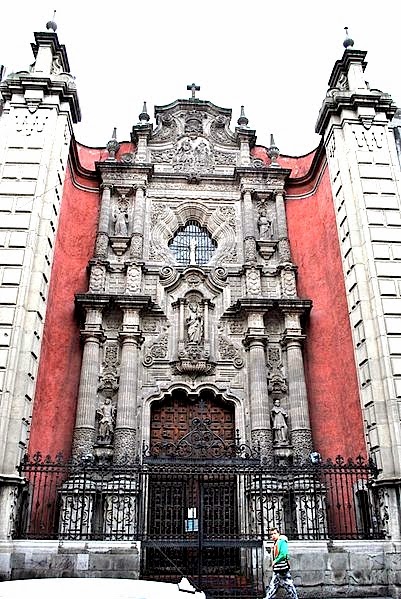 Another Mexico City church that may be classified as a Neostyle monument is that of La Enseñanza, also designed by Francisco Antonio Guerrero y Torres, the architect of El Pocito.
Its official name is La Iglesia de Nuestra Señora del Pilar (Church of Our Lady of the Pillar) originally part of a nun's convent called El Convento de la Enseñanza La Antigua (The Old Convent of the Teaching), from which the church’s popular name is derived.
Although the present facade was damaged and essentially rebuilt circa 1912, it was originally built between 1772 and 1778, before the completion of El Pocito. 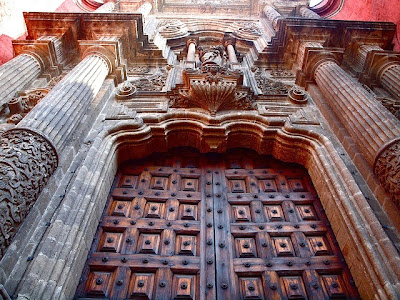 While the open center facade retains late Baroque elements like the neo Moorish door frame and choir window, together with passages of foliated ornament and outsize scrolls, the overall format of the church front is more soberly classical in format, with the suggestion of a triumphal arch.
Narrow, lateral sculpture niches are framed by orders of sturdy paired columns that are tritostyle in form—fluted in the upper two thirds but carved with relief ornament in the lower third. The columns correctly terminate in Doric capitals below and Ionic above.

Layered classical colonettes also flank the statue of St Joseph with the Christ Child in the center niche; a diminutive statue of the Virgin of Pilar is posed against the enormous choir window.
The lower side niches house statues of St John Nepomuk—a joint patron of the church with the Virgin of El Pilar—and St Michael, while Saints Benedict and Ignatius Loyola stand above.

text © 2014 Richard D. Perry.  images by the author and courtesy of Niccolò Brooker