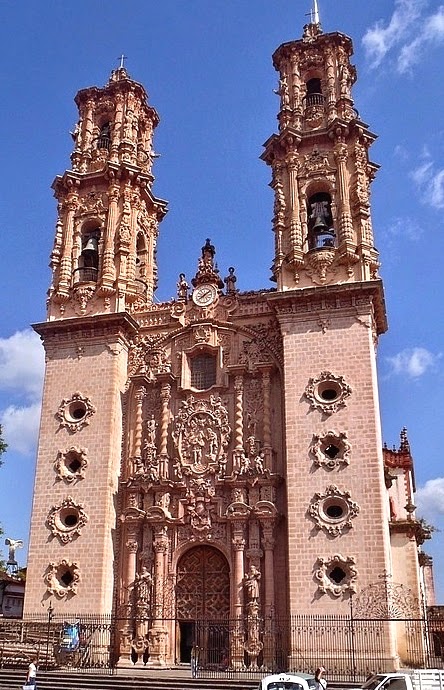 In 1751 the wealthy and pious silver baron José de Borda decided to build a splendid new
parish church for the town of Taxco, near his richest mine.

Although several prominent designers and architects have been associated with the project, the supervising architect was Cayetano José de Sigüenza.  Constructed in only 8 years, this seminal church shows a remarkable stylistic consistency, both in the architecture and the interior design and furnishings (about which more in later posts).

Like the other Borda church of Santiago Tianguistenco, Santa Prisca de Taxco, although highly individual in many respects, may still be considered an exemplar of neostyle design.
In this post we focus on the facades. 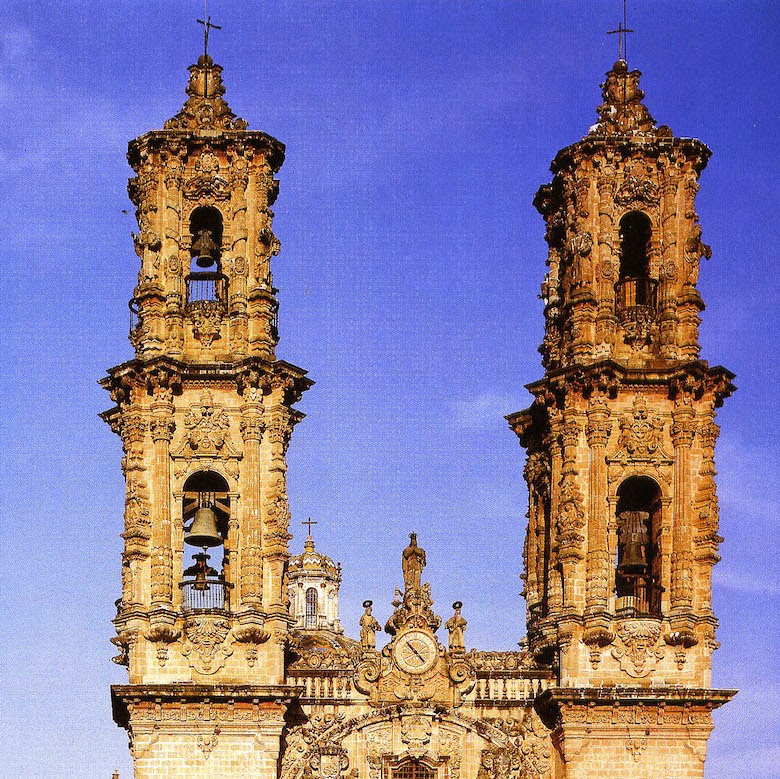 The imposing church front is framed by projecting towers that are crowned by outsized, Moorish inspired twin belfries that bristle with a variety of ornamental pilasters including estípites set obliquely on the corners.
The recessed center façade enclosed by an arched, egg-and-dart molding, is framed by tall, plain and spiral columns with Corinthian capitals. These are interposed with late baroque niche-pilasters incorporating statuary of saints (Peter and Paul below; St Sebastian and the patron, the early Christian martyr Santa Prisca above).
Passages of Rococo scrollwork and ornamental reliefs frame the arched entry and the grand oval relief of the Baptism of Christ above. The multifaceted profusion of curved and broken lines and edges establish the Santa Prisca facade as one of the most dynamic in late baroque design.
The highly ornamental gable atop the facade terminates in a wildly bescrolled pedestal, precariously supporting the statues of the Evangelists John and Matthew and La Purísima at center.   The high cupola of the tiled dome, seen behind the gable, incorporates shell niches and is covered with colorful azulejo tiles in a zig zag design.
The south porch, on the more open side of the hillside church, follows the pattern of the main facade. Two tiers of unadorned, also Corinthian, columns, flank the polygonal doorway below and the relief above, capped again on the lower level by projecting broken pediments that support freestanding statuary.
The voluptuous central relief of the Assumption/Coronation of the Virgin is framed by classical pilasters and panels of foliated rococo relief ornament. Shells, diamonds and lambrequins add to the decorative mix.

For more on Santa Prisca:

Posted by Richard Perry at 4:34 PM