We follow up our posts on Achiutla with a second look at San Pablo Huitzo, an historic mission in the Etla Valley, just north west of the city of Oaxaca not far from Zautla. 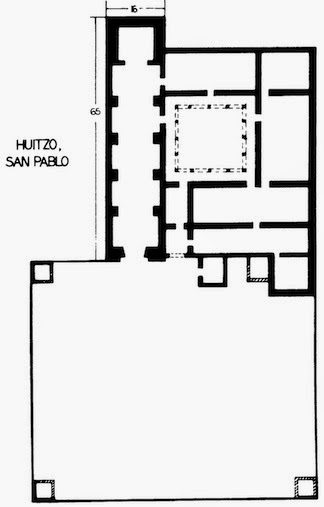 San Pablo Huitzo
Huitzo was the first Dominican mission to be established in this rich, densely populated agricultural region. Founded in 1554, like neighboring Etla it was dedicated to the apostle Paul. 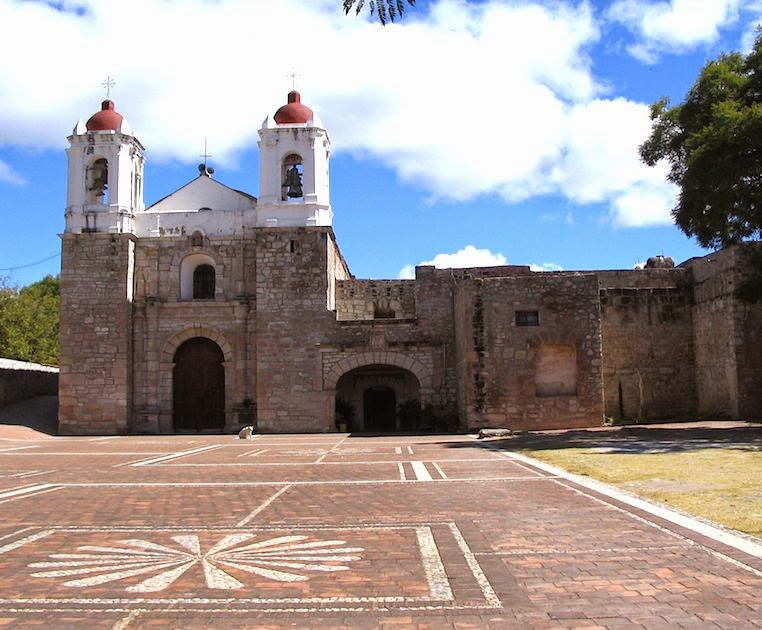 Viewed from across its large, newly repaved atrium complete with rebuilt corner chapels, the west facing mission retains a sturdy Dominican simplicity.
Squat twin towers in the Oaxacan fashion anchor the facade of the church. The flared, paneled doorway, cut from soft, off-white limestone, is flanked by half columns with outsize drum capitals. These extend into the cornice above, which is carved with a frieze of rosettes and angels. 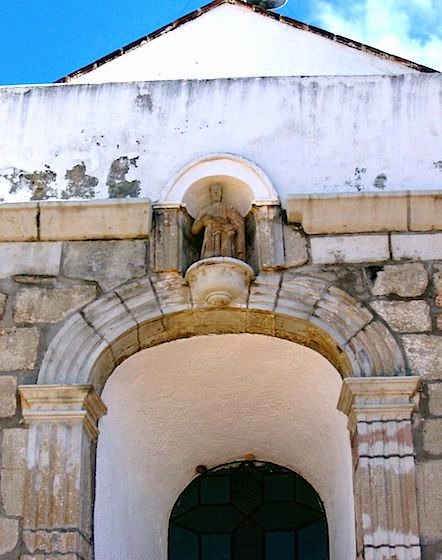 The choir window is treated like the doorway with fluting and a flattened arch like the portería (below). A drum corbel at the apex supports a stone statue of the patron saint, St. Paul, in the little niche above.
Powerful interior buttresses brace the long nave, creating a series of arched niches with side altars. Barrel vaults cover the nave and the narrow apse—the earliest part of the church.
Several colonial paintings of interest reside in the church. In the upper part of the neoclassical main altarpiece is an unrestored painting of The Conversion of St Paul, *  an early colonial masterpiece attributed to the noted Mexican artist Juan de Arrué, who worked in the Oaxaca region under his mentor Andrés de Concha, whose work we saw at Yanhuitlan.
There is a Crucifixion scene with a penitent St. Dominic and, as we saw at Tlalixtac and Tejupan, a fine painting of the crowned Virgin with a portrait of St. Dominic—a frequent theme in Oaxacan churches. 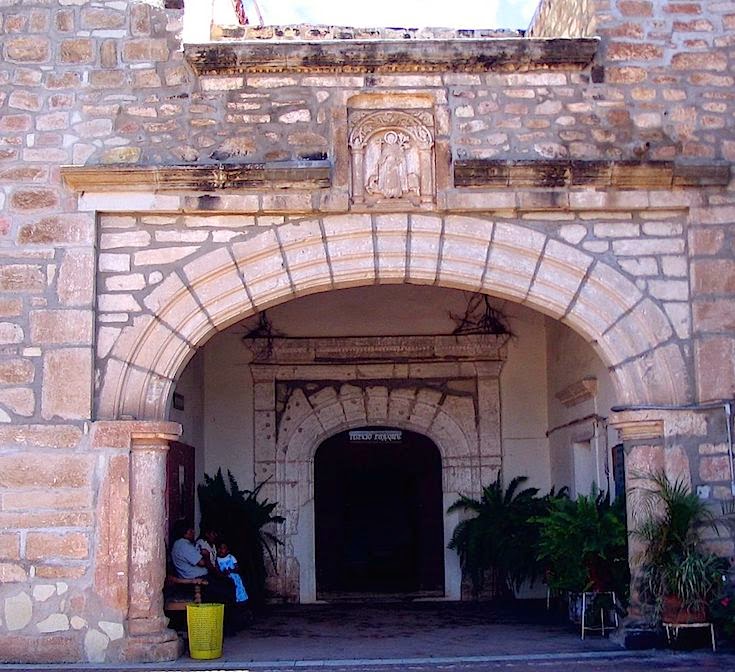 The former convento is attached to the church on the south side. A broad "basket handle" arch frames the portería entry and a similar archway caps the convento doorway beyond.  A simple bas relief of St. Dominic accompanied by his dog and miter is carved into the foliated niche above it. 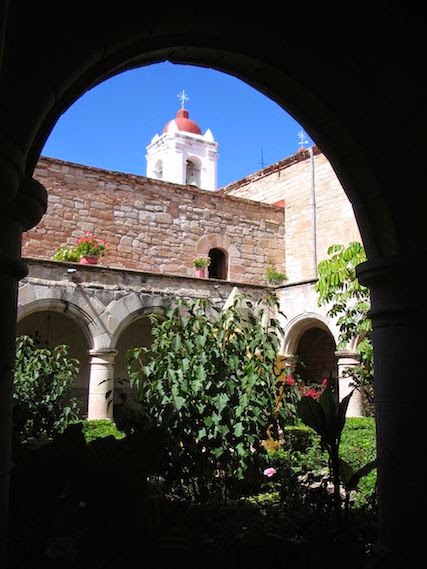 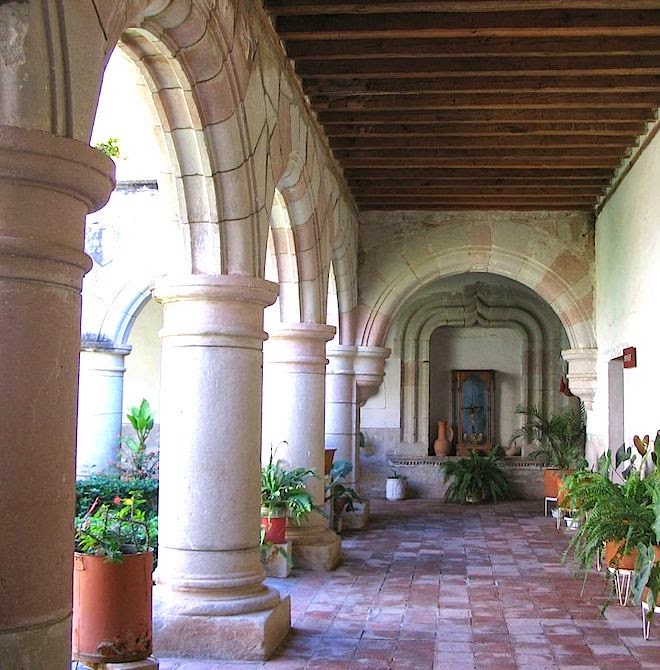 Arcades of ribbed arches set on sturdy pillars and drum corbels enclose the now single tier cloister, which also acts as a virtual museum of unusual stonework.
Gothic style ogee arches frame the corner niches and openings along the walks. 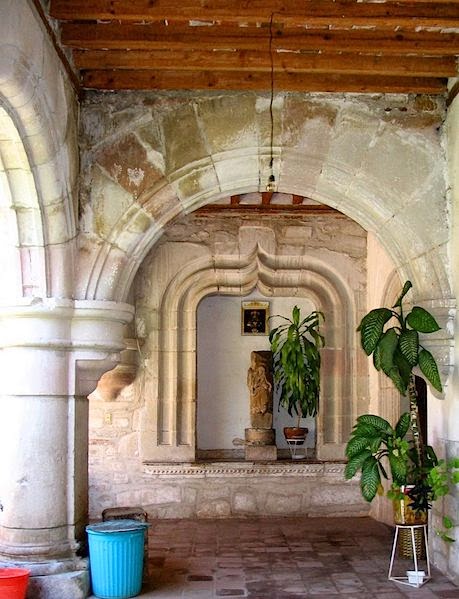 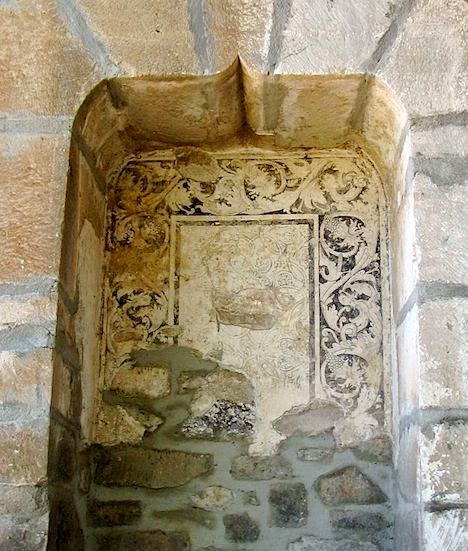 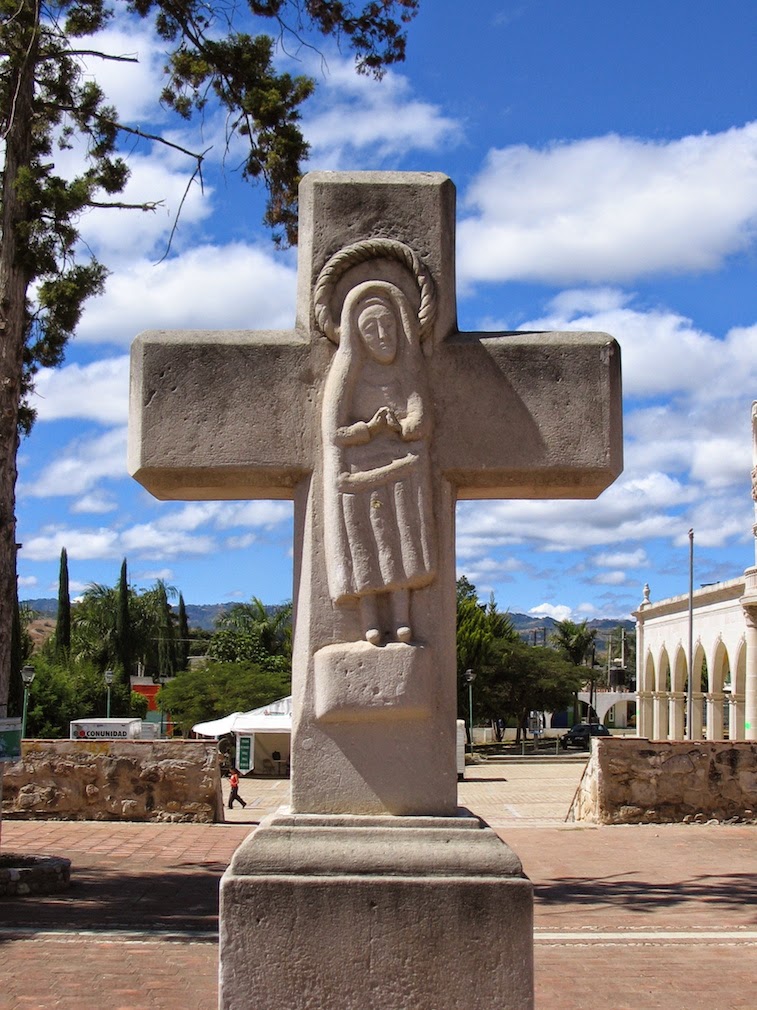 One of the niches contains the remains of a unique 16th century atrium cross.  Unfortunately missing the cross piece, the surviving shaft is carved with the figure of Christ on one side and a relief of the Virgin Mary on the other (an approximate modern copy now stands in the atrium) 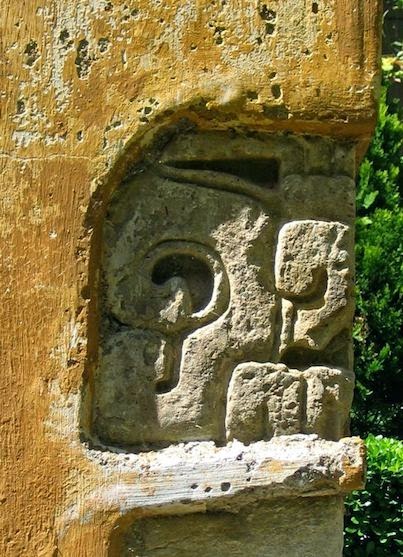 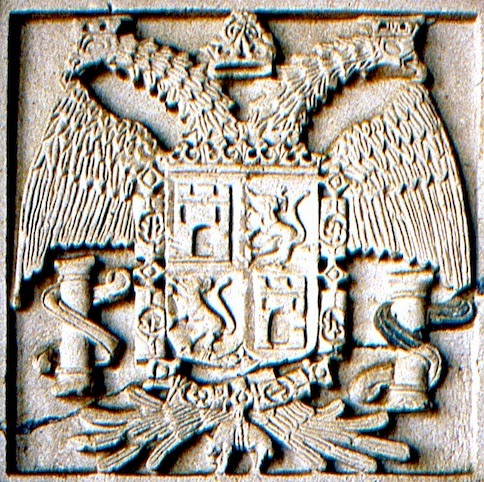 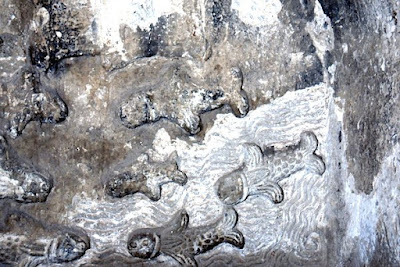 A carved water basin portraying fish swimming through stylized waves is placed beside the stairway. 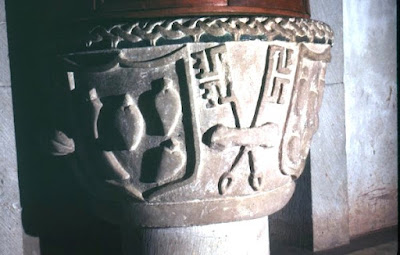 And an old baptismal font with a braided rim, carved with the Five Wounds and the keys of St. Peter, stands inside the church door.

Posted by Richard Perry at 4:43 PM