The somewhat misnamed hamlet of Santa Cruz El Grande, overlooking Lake Chapala near Ocotlán, is one of the least familiar to most Jalisco visitors. However it has a long history that has recently been revived.
A former visita of the Franciscan mission at Asunción Poncitlán, Santa Cruz was the site of a classic 16th century mission church with a separate hospital and chapel—a common feature in the region.

Church and chapel face each other at the ends of a long, wide, paved plaza—the former atrium. In past years both the church and, more recently, the chapel have been virtually rebuilt.
As was customary, the tiny, whitewashed chapel primarily served the indigenous community and was dedicated to the Virgin Mary, in this case as La Purísima, the Virgin of the Immaculate Conception.
While the church front has an entirely new facing, restoration of the chapel—the only surviving part of the hospital—incorporated some of the original architectural elements, including most of the carved, red tezontle doorway and choir window as well as some old reliefs of rosettes, an archangel and a pair of rampant beasts.
Other colonial artifacts inside the chapel include fragmentary murals, paintings, a headless cristo de caña and a colorful folk painting of the Virgin of Guadalupe, complete with the Apparitions. 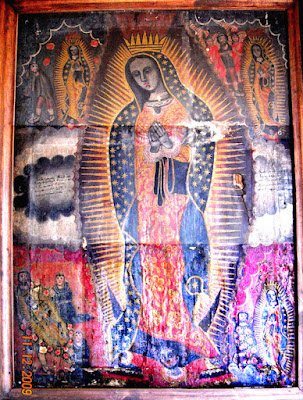 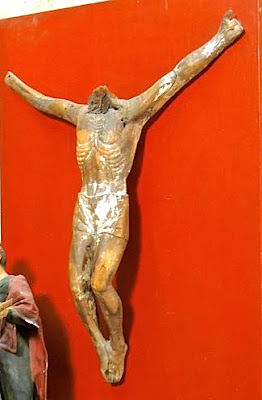 The Crosses
Other original colonial artifacts include the carved stone crosses in front of church and chapel. Both are plain, squared crosses streamlined with cross-within-a-cross motifs in the regional Jalisco style: 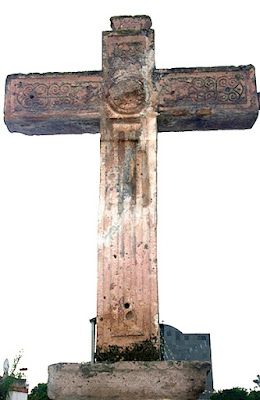 Cross One
Closer to the chapel, this is the more ornamental and probably the older of the two. A circle incised at the crossing encloses a zigzag style Crown of Thorns motif with an eroded cross at the center. Heraldic beasts with claws and snouts—no doubt representing lions—rear on either side, flanked by stylized scrolls with drilled holes at the extremities. 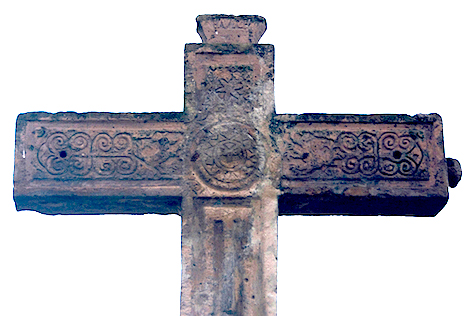 A six pointed flower is cut into the neck above the circle, framed by another Crown emblem. Otherwise the cross is unadorned save for the paneled shaft and a flared INRI plaque on top. 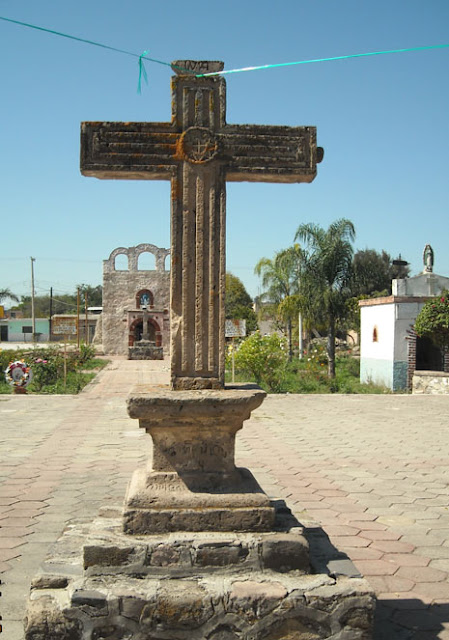 Cross Two
Situated in front of the church, this cross appears to be a later, simplified version of Cross One, cut from the same textured local  limestone and similar in style.
Square, gridded panels extend along the arms and shaft, emphasizing the cross form. The only other relief ornament is a stylized Crown at the axis framing a Greek cross ringed by a serrated octofoil and an outer cord.