Water, Water: the Pilas of Yucatan

In earlier posts on this topic, we looked at the stone baptismal fonts of Oaxaca and Tlaxcala.  On this page we feature a selection of pilas from the colonial era in churches across Yucatán.
As might be expected, the earliest fonts were generally plain and of modest size. In the later 1600s and especially the 1700s, carved relief decoration increased along with the size and breadth of the basins, reaching an apogee with the fonts at Tihosuco and Ichmul, 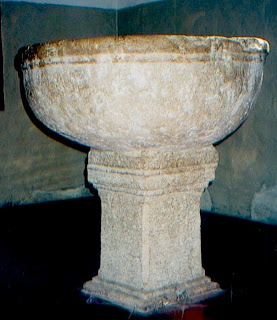 This worn, plain 16th century stone pila from the old open chapel at Uman is set, like many early fonts, on carved pillars or pedestals, some of Maya origin. 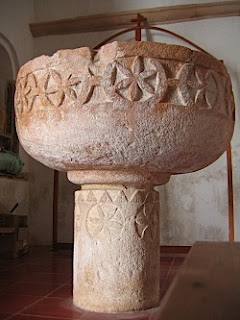 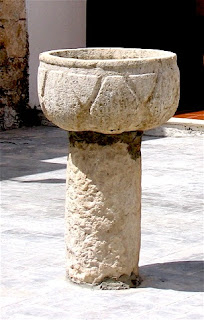 Other early basins are simply carved; with incised rosettes as at Santa Elena and zig zag decoration from Tizimín. 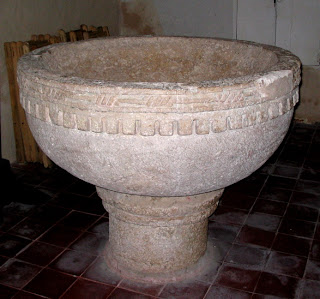 Another relatively early example is this monolithic baptismal font from Telchac. Above a castellated fringe, the rim is crudely carved with the Franciscan knotted cord. 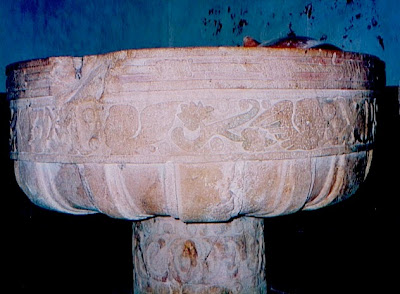 The Franciscan cord is also carved around the rim of this large 17th century pila from Ticul, which is banded with a relief frieze of foliage and winged cherubs. 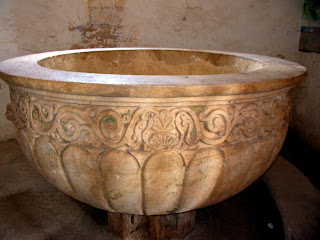 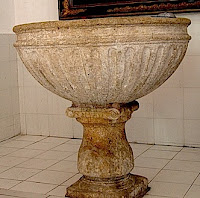 Many baptismal basins ancient and modern, in Yucatan as elsewhere, employ a classic shell form derived from the traditional use of the shell as a container in baptism.
These later examples come from the churches of Mamá and Mérida's San Cristóbal. 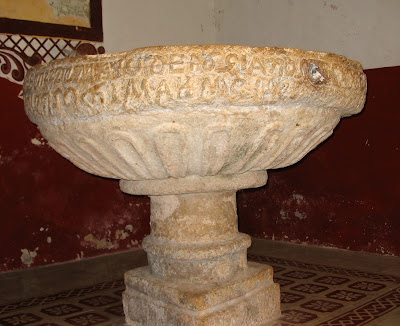 This rugged example of a shell font from Dzemul also boasts a carved rim, elaborately inscribed with a dedication to the patron St. Anne along with the name of the carver—a Mayan artisan, Lorenzo Chimalmelac—and the date 1691. 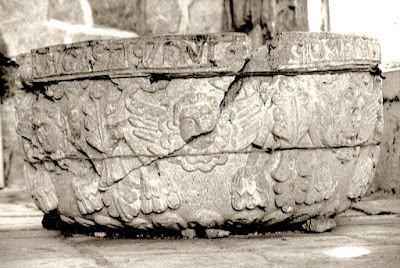 Perhaps the most distinctive group of carved stone fonts in Yucatan are those by another native artisan, the talented Mayan sculptor Pascual Estrella.
Thought to be among his earliest works, this finely carved font with angels' heads, hanging foliage is found at the roofless eastern church of Tihosuco. The inscribed rim records its dedication in 1786 to the newly resident priest, Bachiller D. Francisco Sugasti, a native son of Tihosuco. 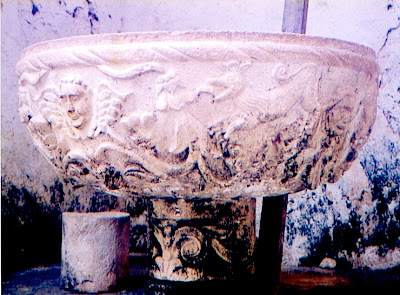 The twisted cord also rims this monolithic Estrella font from Chikindzonot in eastern Yucatan. The basin is again lavishly carved with angels' heads and animals gambol amid lush, looping foliage. 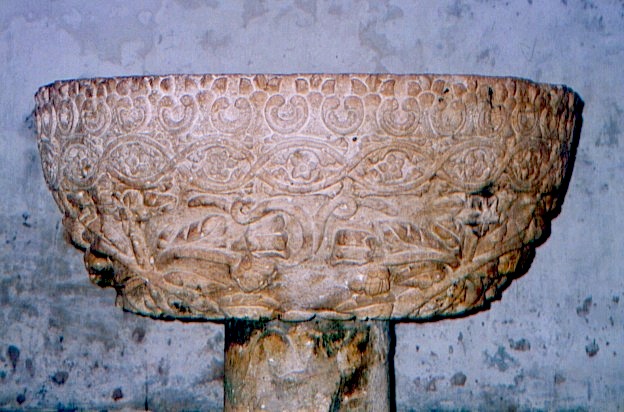 A later work by the same sculptor as the Chikindzonot and Tihosuco pilas, this baptismal font from Ichmul is even more densely ornamented.
Exotic plants with leaves, fruits and writhing tendrils spiral around the lower basin. Stylized, interwoven floral reliefs fill the center band and a ring of curious, horseshoe like "mushroom flowers" encircles the rim.

for complete details on the colonial churches of Yucatán
consult our classic guidebook
Posted by Richard Perry at 10:35 PM