From time to time we take a look at modest rural churches with colonial antecedents that are overlooked by most students of viceregal art and architecture, but that often possess features of historic or artistic interest. We call them Hidden Gems.*
In an earlier post we visited the church at El Puente, in the mountainous mining region of eastern Hidalgo. Here we look at another church in the area with colonial art works and connections with the history of mining.
The town of Huasca de Ocampo nestles in a picturesque outer valley of the Sierra de Pachuca, through which a river tumbles over basaltic outcroppings surrounded by forested ranges.
Although at one time a 16th century Augustinian ermita, the Huasca parish church, as it stands today, dates mostly from the 18th century. It was founded by Pedro Romero de Terreros, the first Count of Regla, a prominent mining magnate and philanthropist, who owned valuable silver mines and established several haciendas de beneficio in the area during a major mining boom in the 1760s. 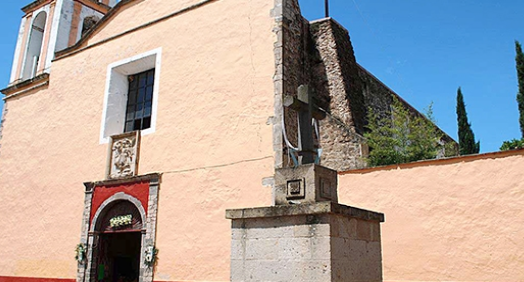 The church front remains surprisingly modest, however, and despite the relief of the Archangel Michael above the main portal, is dedicated to John the Baptist. (This handsome relief was reputedly commissioned and donated by Romero de Terreros himself, a devotee of the archangel.)

Inside the roomy church, numerous side altars line the nave, mostly dating from the 18th century. One baroque example (1) framed by spiral columns, is dedicated to St. Anthony of Padua and features a statue of the saint along with a winged portrait of the Dominican preacher St. Vincent Ferrer.
Another retablo (2) centers on a large painting of Las Animas, portraying the Archangel Michael flanked by two Franciscan saints above souls in Purgatory. 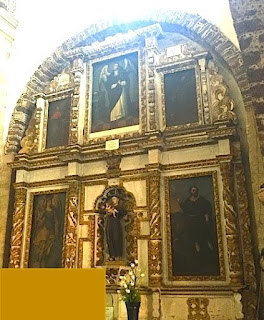 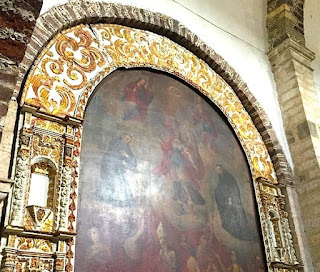 
The festival of John the Baptist takes place on June 24 of each year, an event boisterously celebrated with masses, horse racing, cockfights, sporting events, folk dancing and of course fireworks.
Two former mining haciendas in the area, those of Santa Maria Regla and San Miguel Regla, have recently been refurbished as luxury hotels, their former chapels often used for weddings.
At Santa Maria Regla, the chapel is dedicated to Our Lady of Loreto, and is attractive mix of urban and rustic, with an ornate, colonnaded front, a soaring tower, a cylindrical stairway and one giant flying buttress.
* Check out our other Hidden Gems: Xichu de Indios; San Felipe Sultepec; San Pablo Malacatepec;  Ocoxochitepec; Mixquiahuala; Cherán;
text ©2017 by Richard D. Perry
images from internet sources and by Niccolò Brooker
Posted by Richard Perry at 12:27 PM