One of the richest of the Guanajuato mines, the Mineral de Rayas was located atop the mother lode, or veta madre, set prominently in the hills above the city. In fact the mine still partially functions behind its forbidding, fortress-like structure.

A significant part of his legacy was the Temple of San Juan de Rayas, one of the most elegant of the silver chapels, erected in the settlement of San Juan de Rayas located beside the mine. It was completed in the 1770s, replacing a more modest chapel dating from the 1500s, at a then staggering cost of 54,000 pesos.
When the Rayas mine played out towards the end of the colonial era, the village of San Juan de Rayas came upon hard times, and by 1850 was virtually abandoned. The neglected temple fell into disrepair and by the early 1900s its integrity was threatened by landslides and unstable mine workings.
The Relocation
By the mid-1940s, the temple was in imminent danger of demolition because of planned construction of the Panoramic Highway that encircles the city. At the eleventh hour, the local Rotary Club came to the rescue, carefully dismantling the chief architectural elements of the temple.
The facade, along with the tower and a lantern above the dome were brought down from the mountainside stone by stone and reassembled to form a new front for the church of Guadalupe de Pardo, a former hacienda chapel located west of the city center in the barrio of Tepetapa, where it now remains. 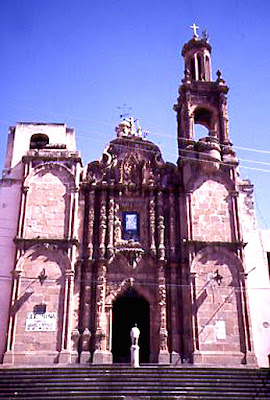 While no longer in its original location, the Rayas temple is now recognized as a classic of the Guanajuatan baroque. Although not so far conclusively documented, we may infer from its distinctive design and the close connection between the architect and the Sardaneta family, that it was the work of Felipe de Ureña* or a close family member. In fact many of the architectural elements displayed in his design for the Jesuit church of La Compañía in the city center are also present in the Rayas temple. 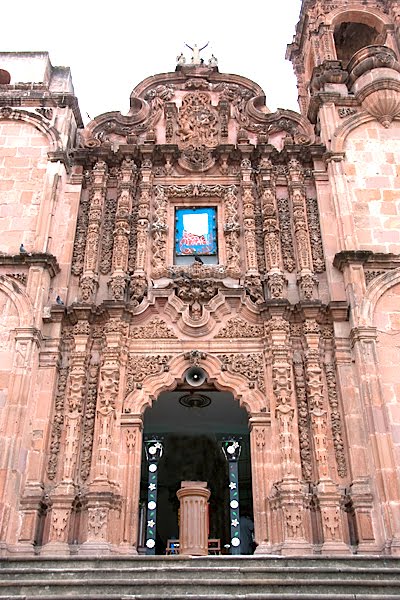 The Facade
“A filigree in stone” as Manuel Toussaint, the late dean of Mexican colonial art studies, once called it, the Rayas temple facade, with its intricately layered estípite pilasters, expansive “moorish” doorframe and exuberantly scrolled gable, displays all of the signature features of the mature felipense style.
In the Rayas facade the architectural elements are sinuously layered, set one upon another against a tapestry of modeled floral relief—a pattern traceable back to Spanish Plateresque design, as well as pre-hispanic pictorial and sculptural traditions in Mexico.
This complex center façade stands in contrast to the flanking, blank arches, an unusual feature that suggests an unfinished state, even as configured in the original building. 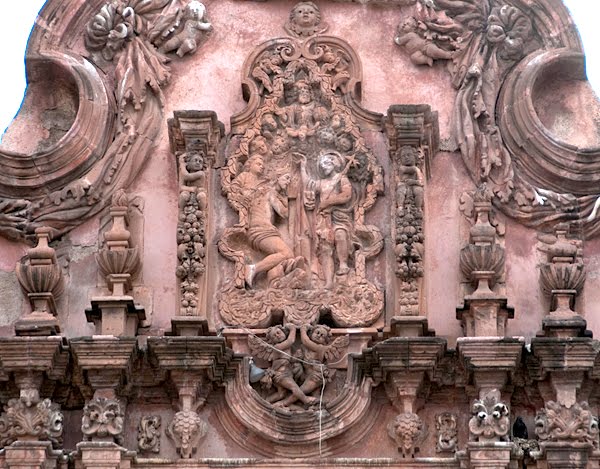 The Iconography
The intricately carved tableau of the Baptism of Christ, framed by an elaborately festooned niche and prominently placed in the center of the gable, reflects the temple’s original dedication to St. John the Baptist, the namesake of the founder of San Juan de Rayas.
In contrast to the sophisticated treatment of the architectural elements, this carved relief evokes a more popular feeling, especially in the arrangement and detailing of the figures. (This is generally true of Mexican architectural sculpture from almost every period—another legacy both of Spanish popular art and pre-hispanic influenced, so-called tequitqui, forms.) 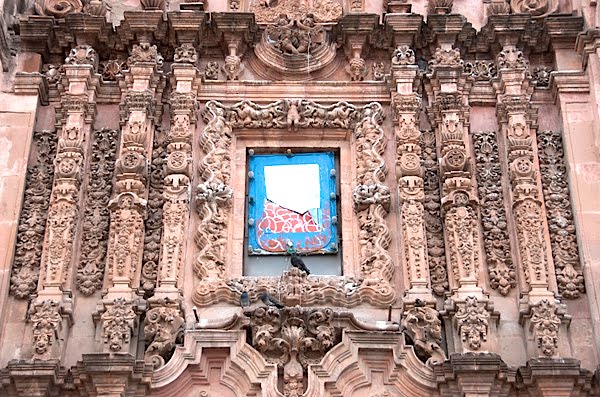 Including the John the Baptist relief, several other ornamental motifs evoke water symbols traditionally associated with baptism, such as seashells, the wavelike window frame, the undulating doorway arch and upper pediment, even the dripping stalactite style pendants on the lower columns.
In addition to its magnificent west front, many other ornamental and structural elements of the Rayas temple, including the single south tower, the octagonal dome with its pendentives and lantern, and not least, its superb gilded retablos (see Part Two) were putatively designed by Ureña in accordance with his innovative concept of “total design,” and expertly fabricated by craftsmen from his celebrated family workshop. 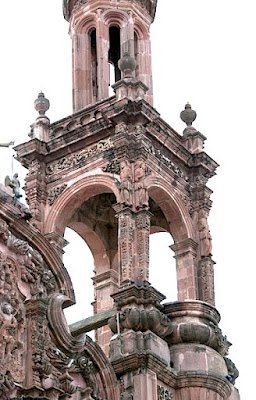 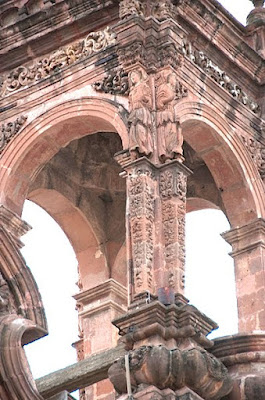 The Tower
The single south tower, while still ornate, is less extravagant than the facade. Tall and elegant, its large bell openings are framed by slender but finely carved estípites capped with caryatids. A circular, temple-like cupola caps the square tower.
The Dome
Because of the oval configuration of the pre-existing Pardo dome, the circular Rayas temple dome and its supporting structure, although salvageable, could not easily be placed in that location.  However, the transplanted lantern is there, also elaborately ornamented with prominent estípites and projecting cornice. 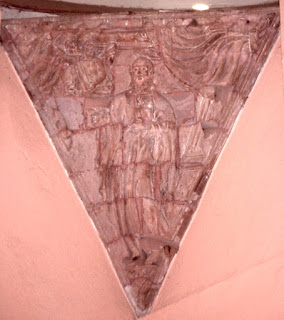 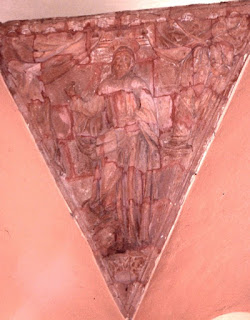 The Pendentives
The supporting pendentives—four large, triangular reliefs of the Evangelists—have also been preserved. These can now be seen, installed somewhat inconspicuously, above the principal stairwell of the School of Architecture, located in the Unidad Belém of the University of Guanajuato—formerly the Bethlemite hospital/monastery. 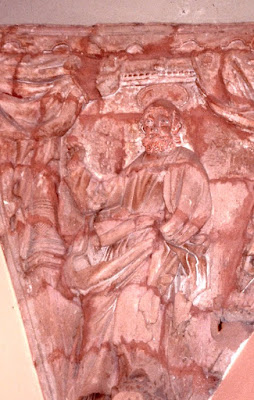 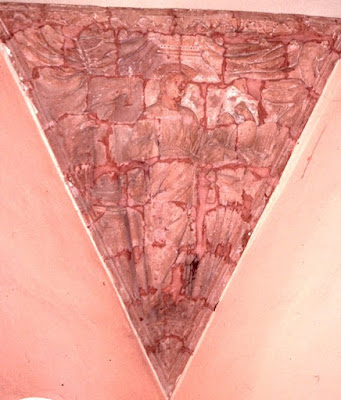 Carved in low relief and originally painted in bright colors, each panel portrays one of the Four Evangelists with his respective attribute: Matthew (angel), Mark (lion), Luke (ox) and John (eagle).
In our second post we will look at the "rescued retablos" of the Templo de Rayas.
*Known as El maestro transhumante, the "peripatetic master", Felipe de Ureña was the most influential of the Mexican born architect /designers to introduce and expand the Churrigueresque style into New Spain. During the second half of the 18th century, together with family members, he was primarily responsible for the spread and subsequent evolution of this ornate late baroque style into cities across Mexico, especially along the silver routes north of Mexico City. Primarily an innovative designer and fabricator of altarpieces, he later adapted the barroco estípite style as it was called, for church facades. His elegant and distinctive designs are recognized and known as the felipense style.