To inaugurate our 2018 series on notable colonial altarpieces in Mexico on a seasonal note, we consider the newly restored retablo mayor of Santos Reyes Metztitlan.
In other posts on this majestic Augustinian priory we have looked at the carved crosses there as well as its extraordinary murals. By good fortune, or perhaps because of its provincial conservatism, Metztitlan, alone among the monasteries of Hidalgo, retains six of its colonial retablos. Their intricate gilded frames and painted saints create a thousand glinting lights in the darkened nave. 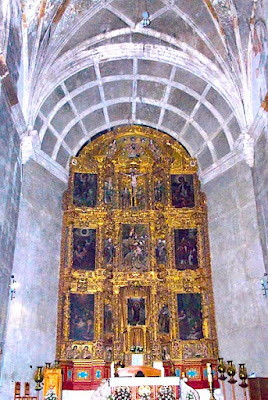 In this post we take a closer look at what is arguably its finest treasure, the main altarpiece or retablo mayor, dedicated to Los Santos Reyes or Three Kings. 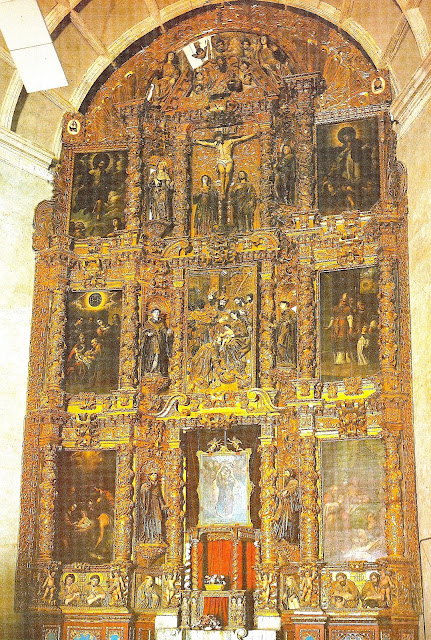 Perfectly framed by the flared walls and the coffered vault of the sanctuary, the main altarpiece is the sole major colonial retablo to survive in the region.
It is a masterwork of the Solomonic style, completed in the year 1700 by the celebrated Mexican sculptor Salvador de Ocampo, for the staggering sum of 6800 gold pesos.
Close to disintegration by the 1980s, the altarpiece was rescued by SEDUE, the Mexican agency for urban and ecological development, and has now been recently fully restored.
Because of its long isolated geographical situation and condition, virtually all the statuary and paintings are authentic and mostly in their original placement in the retablo—a rarity in altarpieces of this date, grand scale and artistic importance. * 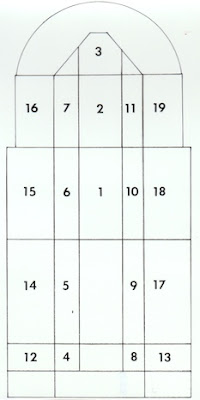 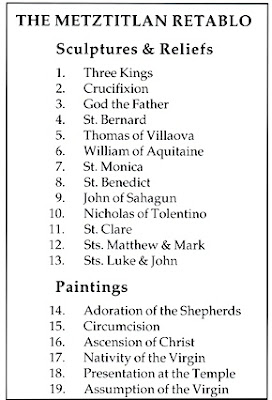 The retablo is over fifty feet high with lateral sections sweeping forward like wings. The five tiers—a predella or base, three main stages, and a gabled top tier—are divided into five vertical sections, or calles. The wide center calle features large wooden reliefs, and is flanked by narrow sections containing figure sculptures. The wings frame a sequence of large paintings.
Spiral columns define the ornamental framework. Encrusted with twisting red and green vines and headed by ornate Corinthian capitals, they sound the dominant note in a voluptuous symphony of shells, scrolls, swags, dripping pendants and winged cherubs, against a rich counterpoint of strapwork and gilded foliage. 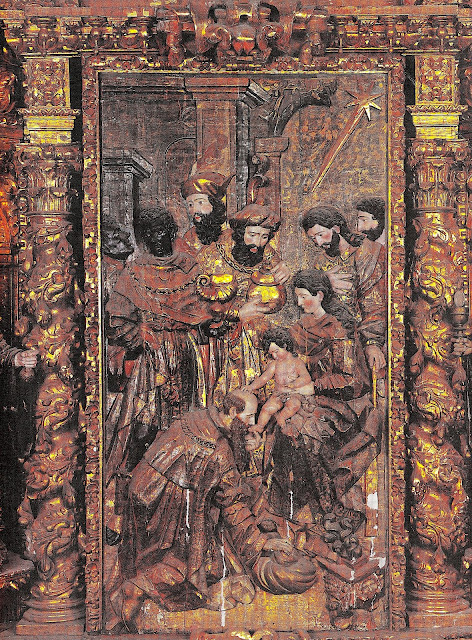 The central relief of the Three Kings is believed to be from the accomplished hand of Ocampo himself, who is best known for the sumptuous choir stalls that he carved for the church of St. Augustine in Mexico City in the same period.
The luxuriantly bearded kings in their opulent estofado robes gather around the infant Jesus and his mother. Considering its late date, the panel has an anachronistic Renaissance harmony, the idealized poses and serene expressions of the figures giving no sign of baroque drama.
Also attributed to Ocampo are the Crucifixion tableau with the sorrowing Virgin and St John, flanked by St. Clare and Augustine's mother, St. Monica in the flared niches, as well as the relief of a bearded Padre Eterno above accompanied by the reclining figures of Faith and Hope.
Elaborately framed niches on each side of the center section house elongated statues of revered Augustinian saints. These include Nicholas of Tolentino and William of Aquitaine, on either side of the Three Kings, and Thomas of Villanova and John of Sahagun below.

William of Aquitaine and Nicholas of Tolentino
Painted reliefs of the rarely portrayed monastic founders, St. Bernard and St. Benedict, appear on the predella at the base, together with the Four Evangelists, all flanked by sensuous cherubs. 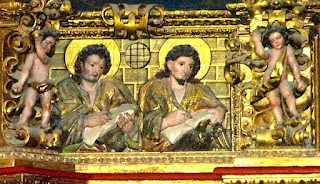 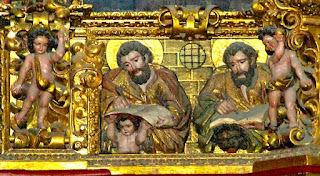 The Four Evangelists
The Paintings
Six lateral paintings illustrate scenes from the lives of Christ and the Virgin. They are attributed to the painter Nicolás Rodríguez Juárez, a member of an illustrious family of Mexican artists. One of the leading painters of the Mexican Baroque, he was noted for his luminous but muted colors and the elegant Mannerist dignity of his figures.
Now restored, we can again experience the full impact of this superb altarpiece—undoubtedly Salvador Ocampo's masterpiece—as well as appreciate anew its religious message: the exaltation of Christ and his Mother and the glorification of the Augustinian Order, and better comprehend its undoubtedly mesmerizing effect upon the congregations of three centuries ago.
* The central panel on the first tier is thought to have been originally occupied by a painting of the Nativity, also by Rodríguez Juárez, stored until recently in the sacristy.