The great monastery of San Juan Coyoacán was the hub of a singular group of smaller barrio chapels, many of them early colonial in origin and of historic architectural and artistic interest.

In recent posts we described the restored chapels of La Conchita, Santa Caterina and San Francisco.
For this final post we look at minor chapels in three other traditional Coyoacan barrios: those of Los Reyes (Huetlilac) El Niño Jesus (Tehitzco) and La Candelaria (Atlacuhuacan) 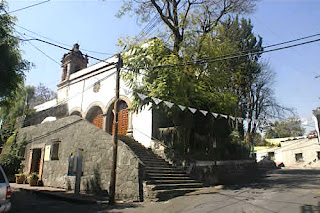 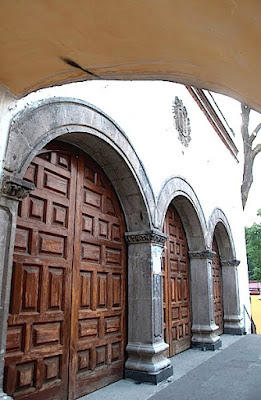 La Capilla del Niño Jesús
All follow a format we saw in the other chapels: an arched sanctuary fronted by an arcaded entry portico. Los Reyes and El Niño Jesus occupy elevated positions in their barrios, most likely located on the sites of prehispanic shrines or temples and erected in part to take advantage of this former sacred association.

Starting out as an open air visita chapel in the 1500s, by the 1600s it developed the traditional arcaded front, a format that it still retains although almost entirely rebuilt in the past century.